Crime Stoppers of Michigan is offering $2,500 reward for tips to find a suspect nearly three months after a man was slain on Detroit's east side. 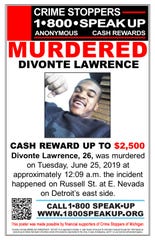 The reward was announced Wednesday. (Photo: Crime Stoppers of Michigan)

Divonte Lawrence was pulling up to visit a friend near Russell Street and Nevada after dropping off relatives about 12:10 a.m. June 25 when someone approached and fired several shots into his Chevrolet TrailBlazer, investigators said in a statement.

The 26-year-old father of two, who was engaged to be married, died from his injuries.