Aretha Franklin book 'The Queen Next Door' launches in Detroit

Aretha Franklin book 'The Queen Next Door' launches in Detroit

The national book launch at the Detroit Institute of Arts for Linda Solomon’s new photo book on Aretha Franklin, “The Queen Next Door” proved to be an afternoon of revelations, even for those who thought they knew everything about the Queen of Soul. 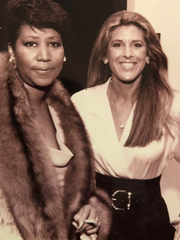 Aretha Franklin and photojournalist Linda Solomon, author of "The Queen Next Door," at a private benefit for the DIA in October of 1985. (Photo: Linda Solomon)

Isaiah Thomas, Franklin's favorite of the Detroit Pistons Bad Boys, flew in for the Sunday event and surprised even the author, as he sat in the front row of the Detroit Film Theatre auditorium. As a young player, Thomas said, he came to know Franklin and was so green he couldn’t have functioned without the support of her and her family

“I used to overpay my electric bill, because I thought, that way they’ll never turn the lights out on me,” he said, to laughter.

As for revelations, opera coach Mary Callaghan Lynch, who was one of the panelists assembled onstage to share anecdotes about Franklin, said she had an appointment with her the day before she died, to teach her a German aria.

“Aretha texted me and said she was sorry, but we would have to reschedule,” Lynch said. “But, she added, ‘We’ll work together soon.” Franklin died the next day, Aug. 16, 2018. Franklin never lost her passion for music. “She never stopped learning.”

Former Gov. Jim Blanchard flew in from Washington, D.C., with his wife, Janet, just for the book launch (Painted Turtle/Wayne State University Press). It was Blanchard who, in 1985, joined the state Legislature in declaring Franklin's voice a “precious natural resource” of the state.

At the Cadillac-sponsored pre-party, awash in pink champagne and rose-colored pastries in homage to the pink Cadillac from “Freeway of Love,” Blanchard, who has a home in Beverly Hills, recalled seeing the singer all over Bloomfield Township — at the Embers Deli on Maple, at the Kroger and the Sav-On Drugs on Telegraph (now a CVS).

One time he spotted her in a drugstore aisle and called out, “There she is, my Queen of Soul!” Janet Blanchard said. “Aretha turned and said, ‘There he is, my governor!’

“I don’t know if I was her only governor, but I was pleased,” Blanchard said. 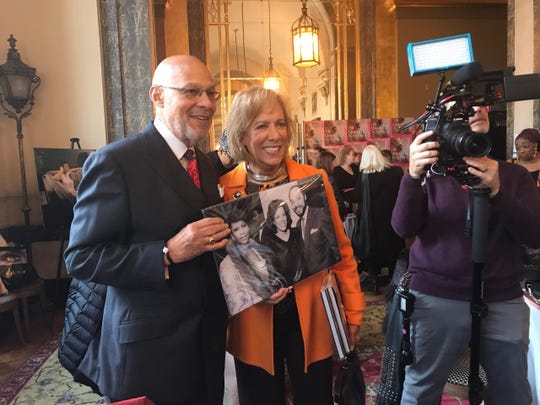 Former Mayor Dennis Archer and Trudy Archer with a Linda Solomon photo of them with Aretha Franklin. (Photo: Sue Whitall, Special to The Detroit News)

The Blanchards are longtime friends of Solomon and her husband, Barry, as are former Detroit Mayor Dennis Archer and his wife, former judge Trudy Archer, who were also on Solomon’s Friends of Aretha panel.

Barbara Henderson, widow of Billy Henderson of the Spinners, came from Florida to celebrate the book. Henderson goes back to high school with the Queen — she attended Northern High School along with Franklin's older brother Cecil, Smokey Robinson (Cecil’s best friend) and older sister, Erma Franklin.

Henderson recalled how helpful Franklin was to the Spinners, suggesting that they sign with Atlantic after they’d hit a dead end at Motown. Thus began a new career and many more hits for the group, starting with “I’ll Be Around.” Henderson also has a book out about her husband and the Spinners, “Just Spinning.”

Franklin's friend and aide, Beverly Bradley, talked wistfully of the singer’s last days in her riverfront apartment. “She would read, and we would watch old movies on Turner Classic Movies, order Sparks barbecue, watch the boats go by on the river, talk about why we were still single. We became very close. I can still hear her voice in my head, saying, ‘Bevvv.’”

Thomas also imitated Franklin's voice, capturing her chiding, negative “Uh unh,” directed at him when he was pondering doing something she didn’t like. 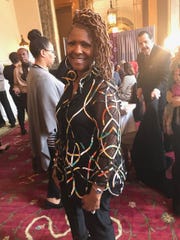 Franklin's sons were not in attendance, there has been some tension recently over estate issues, but much of the female side of the Franklin family was in attendance. Her niece and estate representative Sabrina Owens, having lost her mother, Erma, some 16 years ago, said she missed the “motherly” interactions she had with her aunt.

Franklin's cousin, Brenda Franklin Corbett, and her friend, Beverly Bradley, talked affectionately about their occasional sisterly beefs with the Queen of Soul.

“A lot of us on this panel had a moment like that,” Bradley quipped. Said sister-in-law Earline Franklin, who was married to Franklin's brother Cecil, said: “Everybody knows that look,” flashing a queenly frown. “‘Do you think I’m a fool?’”

Corbett revealed that once as a girl she was walking around the Franklin house singing when Franklin objected.

“She told me, ‘Shut up, you can’t sing,’” Corbett remembered.

Corbett laughed. “She was kind, but we would also get into it like sisters.”

Earline Franklin agreed: “She was fussy and I was feisty, but we always ended up in the same spot.” Earline Franklin also recalled the hospice nurse saying, on Franklin's last day, that the Rev. Jesse Jackson had to leave, because the singer was trying so hard to talk to him, and it was causing her to be too excited.

About that famous purse of Franklin's that was always onstage with her, often under, or nearby, the piano: The purse was actually a helpful visual for the background singers, Brenda Corbett said. 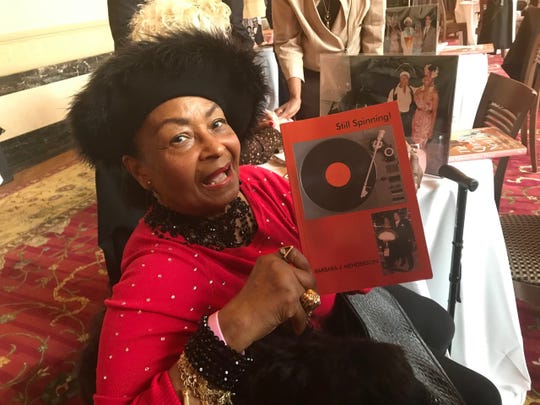 Barbara Henderson, widow of Billy Henderson of the Spinners, has known Aretha and her family since her Northern High School days. (Photo: Sue Whitall, Special to The Detroit News)

Opera coach Lynch revealed more of the details behind one of Franklin's most stunning public performances — the time she stepped in for Luciano Pavarotti at the Grammys and sang the aria “Nessun Dorma” in his place. Franklin had Lynch teach her the aria, at Pavarotti’s request, for an earlier event. The Grammys performance came about with just 30 minutes’ notice, Lynch confirmed.

“And she just nailed it, as everybody knows. She loved Puccini. She would often call me and sing something, and say, ‘Mary, what is this?’ And she’d want me to teach it to her.”

Franklin's niece Cristal, daughter of her brother Cecil, spoke last. Cristal laughed at the photos projected on a screen that showed herself as a young girl, partying with her aunt and family. “Oh! Look at that ugly purple dress. That’s my life there, in this book,” she said.

The lesson of Aretha Franklin’s life, as Cristal Franklin would want people to know it: “Study. Be patient. Learn your craft. Love your craft.”

-- Learn more about the book at Wayne State University Press