Detroit — While a developer with plans to renovate the United Artists building has said that demolishing the theater is a condition of funding from the Department of Housing and Urban Development, that is not the case, according to the federal agency.

“HUD did not impose a condition requiring the demolition of the theater,” said Marta Juaniza, public affairs specialist for the HUD. “The borrower’s proposal was to demolish the theater.”

Developer Emmett Moten, the managing member of Bagley Development Group LLC, said during the City Council's planning and economic committee meeting Thursday said that the Department of Housing and Urban Development was requiring that the theater being demolished.

“HUD told us basically that they’re not going to go forward unless the theater is coming down,” Moten said during the meeting. “We don’t have a project without that.”

However, on Monday, HUD said that demolishing the theater was not a requirement.

The project would be funded largely by HUD under its mortgage insurance program, which allows for long-term mortgages up to 40 years. 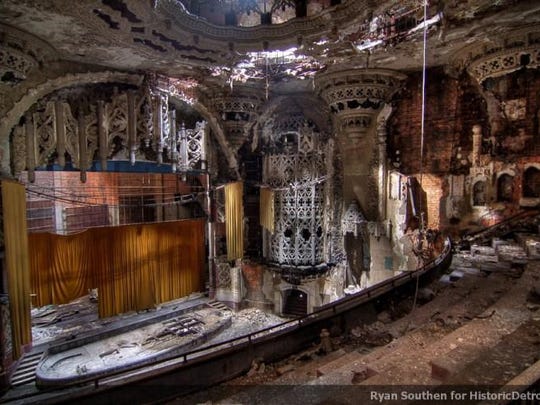 Plans to demolish the theater at 150 Bagley were revealed late last week when Bagley Development Group LLC presented its $56 million plan to redevelop the United Artists building into 148 apartments, with 20% designated as affordable. The development is called Residences @ 150 Bagley.

But complicating matters, the mortgage company financing the renovation of the building said changing plans to refurbish the theater would put the project's financing at risk. It also had concerns that keeping the theater — even if renovated — would make it diffcult to lease the residential units.

Developers for the project late Monday forwarded to The Detroit News a commitment letter from Gershman Mortgage, the St. Louis-based company processing the loan, which states that not demolishing the theater as proposed would constitute a material change from the financing application.

“It has recently come to Gershman’s attention that there is consideration not to demolish the theater,” Gershman Mortgage wrote in an Oct. 2 letter to Moten. “Not demolishing the theater is a material change from the financing application that has been presented and approved of to date and making this change will put the (HUD-insured loan) financing at risk.”

Moten noted Monday night that the demolition of the theater is a condition of the underwriting.

The United Artists building was last occupied in the early 1980s, according to HistoricDetroit.org. It went through numerous owners, including one who sold its fixtures in 1975. Olympia Development of Michigan bought the building in 1997.

The theater space will likely be used as a loading dock in the new development, Moten said. A small entrance lobby would be preserved.

Moten has taken heat from preservationists most recently for his plans to demolish the Saturday Night building to provide surface parking for the Fort Shelby condos. The demolition could begin any day after the city earlier this month rescinded its revocation of a demolition permit for 550 W. Fort that was issued in December.

Eric Kehoe, past president of Preservation Detroit, takes issue with the demolition of the United Artists theater.

"The Ilitches are worth billions and have received millions in subsidies from the government," he said. "Now they and their partners are asking for even more tax breaks to demolish a theater they themselves let rot for decades. They have the money to rehab the building and make good on their unfulfilled promises to revitalize their blighted properties. It’s a question of whether they care enough about the city and its residents to do so."

The State Historic Preservation Office supports the demolition of the theater, saying there is not much that can be saved, said Robbert McKay, historical architect with the office. .

“It’s basically a brick box with little bits of plaster hanging here and there,” McKay said. “The other concern, which we always have, is what’s the structural integrity of a building.

"The conclusion was that the building structurally was probably not sound and not a viable candidate for rehabilitation.”

The structural engineer that reviewed the property did not say it was an imminent threat for collapse, McKay said.

“If price were not an object, the answer is sure, it could be retained,” he said. “By the time you got done with all your modern interventions, do you really have a historic building anymore or do you have a new building that is designed to pretend to be something it isn’t, which is a historic theater."

Ed Saenz, spokesman for Olympia Development of Michigan, said the company fully supports redevelopment of 150 Bagley. He referred questions about the project to the developer.

"This project will bring construction and permanent jobs to Detroiters, affordable and market-rate housing, as well as new residents and businesses to the neighborhood around Grand Circus Park," he said.