Detroit — Infighting at Wayne State University over the use of public dollars for physicians who treat the poor has attracted the attention of the FBI public corruption task force, The Detroit News has learned.

After several WSU doctors accused the university earlier this year of skimming money that was owed to them, the FBI approached several people, two sources told The News.

Among those interviewed was Michael Busuito, a member of the WSU's Board of Governors who is part of a faction that has called for President M. Roy Wilson to leavethe university. A source said a Detroit FBI agent questioned Busuito about how funds flow in a program aimed at increasing health care access to Medicaid patients. 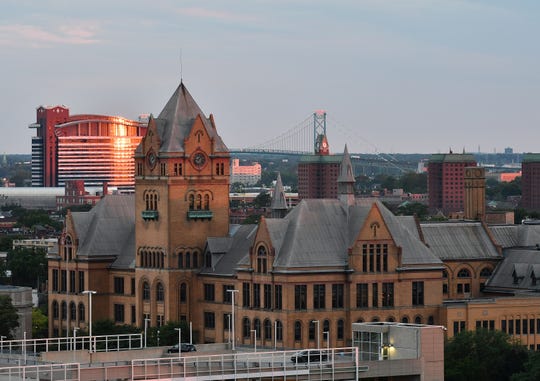 After several WSU doctors accused the university earlier this year of skimming money that was owed to them, the FBI approached several people, two sources told The News. (Photo: Robin Buckson, The Detroit News)

A lawsuit filed last month framed the issues at stake: Wilson, along with former Vice President of Health Affairs David Hefner, allegedly withheld and diverted more than $330 million over six years from doctors treating Medicaid patients "to mask WSU's mounting financial losses," according to the complaint.

The lawsuit alleges that the funds were diverted in part to financially cripple the University Physician Group, a medical practice group affiliated with Wayne State, as university officials planned to make the Henry Ford Health System the school's primary medical partner.

The Sept. 19 lawsuit was filed in the Michigan Court of Claims by University Pediatricians, a group representing hundreds of physicians, which six months ago accused the university of skimming more than $60 million in Medicaid funds. The pediatricians practice group left WSU and aligned with Central Michigan University several months ago.

There is no indication that the FBI has opened a formal investigation, which would let agents issue subpoenas to compel testimony and document production. An FBI spokeswoman declined comment.

But the FBI's inquiries add to the growing pressure on Wilson, who faces a sharply divided Board of Governors that has blocked the university's planned tie-up with Henry Ford, publicly squabbled over his future and faced off in court.

Wilson, who became WSU's 12th president in 2013, declined to comment for this story, but he has said numerous times that the funds were  allocated appropriately from the  Medicaid Public Entity Physician Payment Adjustment Program (PEPPAP), a state/federal effort to help Medicaid patients get access to specialty services.

"Neither the state nor the Medicaid Health Plans impose requirements specifying how each public entity is to allocate PEPPAP funds to meet the goal of improving access to specialty and sub-specialty providers for Medicaid patients," Wilson wrote on April 15 to the faculty.

"Whether or not the Wayne State School of Medicine has the legal standing to keep part of the PEPPAP funds to achieve the intent of the authorizing legislation is not a debatable question. It does," Wilson continued. "The question of whether the amount kept is appropriate or not is a related, yet different issue that should be addressed. It is important and cannot be adjudicated through the media."

Wilson also called on the  Michigan Department of Health and Human Services to hire an outside expert to review Wayne State's past and current practices of using the Medicaid funds. 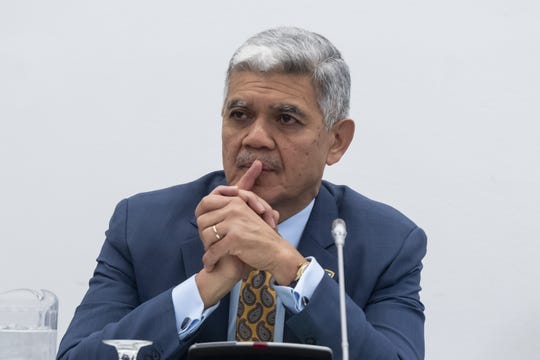 The Michigan Department of Health and Human Services hired accounting firm Myers and Stauffer this month for $168,000 to do a review of Wayne State's funds that is expected to be completed by September 2020, said department spokeswoman Lynn Sutfin.

For an additional $399,000, the firm will review six other Michigan institutions that participate in the program, which awards government dollars to shore up physicians’ payments after treating patients on Medicaid, which are typically small reimbursements.

Matt Lockwood, spokesman for Wayne State, said this week that no one he has spoken to in the university's administration had been contacted by the FBI about the Medicaid funds, and none of them were aware of Busuito being interviewed.

"But we are confident that any review of the PEPPAP program — including the ongoing state audit of all public entities that we initiated —  will find that the university has used the funds appropriately," Lockwood said.

Hefner, who no longer works at Wayne State, declined comment on the lawsuit, saying, "The litigation stands on its own or lack thereof. Let the court decide."

As for the FBI asking questions, Hefner said: "I have no knowledge related to the FBI."

In the background of the lawsuit and the FBI inquiry is the ongoing difficulties between WSU, with a mission to teach and do research, and the Detroit Medical Center, owned by the for-profit Tenet Healthcare.

Wayne State's medical school has faced numerous challenges in recent years, including a $29 million deficit spread among it and two affiliates in 2015 and a citation that year from the Liaison Committee for Medical Education, which said WSU needed to improve its diversity and 11 other areas in the medical school to avoid losing its accreditation.

For decades, Wayne State's primary medical partner has been the DMC, but the university has been actively seeking a new partner; WSU officials say the DMC has not been willing to invest in the university's academic mission.

The university's negotiations with Henry Fordwere torpedoed earlier this year by several WSU board members, including Busuito. Wilson hinted two weeks ago during his state of the university address that talks could be resurrected because "it’s an elected board and there are changes all the time."

At the center of both dramas is Busuito, the Troy plastic surgeon who said Wilson maneuveredhim out of a leadership role with the University Physicians Group, a claim that Lockwood disput.

Busuito then ran and won election in November 2016 to the Board of Governors, which oversees Wayne State. Busuito leads the faction that wants Wilson out, which includes WSU Governors Sandra Hughes O'Brien and Dana Thompson. Another member, Anil Kumar, has sometimes voted with that group.

Busuito, who says he has acquaintances in the FBI but not in the Detroit office, declined to discuss whether  he had been questioned by the FBI.

But he told The News: “If there was no wrongdoing, then nobody should be fearful of (the) FBI. ...”

The alleged inappropriate diversion of funds ran from 2012-18 and involved Wilson, Hefner and "others known and unknown" withholding or converting money owed to University Pediatricians and other provider groups, according to the lawsuit. Wilson became president in August 2013 and Hefner joined the university in June 2015.

The suit alleged a "scheme" involving the Wayne State UPG, a group representing about 250 physicians, many of whom are on the Wayne State University Medical School faculty and work at teaching hospitals including the DMC.

At Wayne State, approximately $100 million to $125 million annually in Medicaid funding has historically been distributed to doctors by the University Physician Group.

UPG declared bankruptcy in November, a move that raised questions about how the federal funds are distributed by physician practices that aren't part of the University Physician Group but still depend on Wayne State and UPG to hand over their Medicaid enhancement payments.

Busuito said an important issue in the PEPPAP funding is something known as institutional adjustment. For every PEPPAP dollar earned by a physician, a small percentage goes to the medical school for a dean’s tax to support research and teaching.

Another small percentage goes for administrative costs. In total, about 12% is diverted from PEPPAP to cover those costs, Busuito said, and the UPG disperses the rest of the funds to the doctors.

When Hefner was an administrator at WSU, he made a unilateral decision to divert more than 12% in PEPPAP funds to the university, the issue that is now in question, said Busuito.

From 2012-18, Wayne State received more than $810 million in payments from the state, distributed less than half — $402 million — to medical providers and kept the rest "to which it was plainly not entitled," according to the lawsuit.

Wayne State withheld approximately $331 million of the $402 million for institutional adjustments between 2012 and 2018, even though the money belonged to University Pediatricians and other medical providers, according to the lawsuit.

During the alleged scheme, Wayne State's medical school, a related nonprofit and UPG were "hemorrhaging tens of millions of dollars due to what Hefner described as 'financial mismanagement' and budget cuts," University Pediatricians attorneys Avery Williams and Juan Mateo wrote in the lawsuit.

In 2015, the Liaison Committee on Medical Education put the university on probation, partly because of its finances, according to the lawsuit.

"Upon information and belief, WSU engaged in concerted activity with WSU executives, including defendants Wilson and Hefner who directed the taking of these institutional adjustments and directed that these takings be concealed from the provider groups, including (University Pediatricians)," the lawyers wrote in the lawsuit.

The FBI questions come as Wayne State University has been on a roller coaster of controversies during the past year, including complaints to the nation’s higher education accreditation agency and the departure of Hefner and many consultants for the university.

“The shambles that have resulted from the Wilson-Hefner regime have created a lot of discord and anxiety in our physician groups,” Busuito said, “and I think that the only way we can bring it back together and run it efficiently like it had been years ago is to get to the bottom of what happened with the finances.”

Lockwood declined to address any of the issues.

"We are not going to get into this until the state completes its audit," he said. "We are just going to fall back on that and let the state clear us and show that everything has been done above board."