Detroit — The night before Halloween was, in the words of Detroit's deputy fire commissioner, Dave Fornell, "average."

The city, which averages "seven, eight" fires most nights, came in on the low end with seven. The day before, there were eight.

In 1980s Detroit, and many decades prior, the night before Halloween was called Devil's Night. The day long carried an element of wrongdoing. 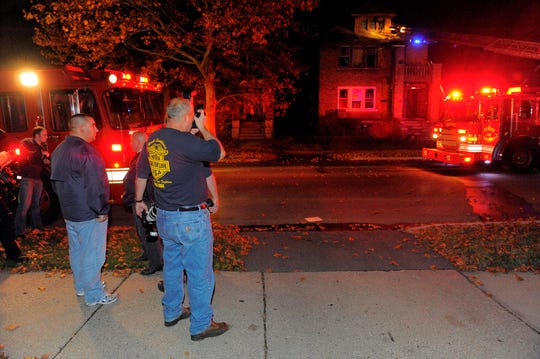 Photographers take photos of a fire near the corner of Waveney and Dickerson during Angels' Night, Friday Oct. 30, 2009, in Detroit's east side. (Photo: The Detroit News)

A reader contacted News writer Jane Lee in September 1962, lamenting the lack of places for local children to play.

Lee wrote: "..now the night before Halloween is 'devil's night.' The little devils go around soaping windows, breaking bottles in the streets and doing other cute little things all happy little kiddies do. Then we poor saps reward them the next day with goodies."

That lighthearted view of Halloween eve held until Detroit drew national news coverage in the 1980s after arsonists torched hundreds of properties — images that were transmitted to millions of nightly news viewers.

As The Detroit News' Ric Bohy wrote in a 1985 commentary, detailing his Halloween eve helicopter ride over Detroit, "as recently as 15 or 20 years ago, Devil's Night was sort of a bonus holiday for kids eager to hit the streets on Halloween ... but some time ago, and I'm not sure when, Devil's Night turned mean."

By 1987, Mayor Coleman Young was staging press conferences with a "No Devil's Night" banner in the background.

The day had become a dangerous occasion in a city shrinking by the year. No longer were the weapons of mischief soap or eggs, but gasoline and fire.

In between, then-Mayor Dennis Archer sought in 1997 to turn the narrative away from the so-called devils setting fires to the so-called angels who protected Detroit, the thousands of volunteers who patrolled the city.

That year, some 35,000 volunteers answered Archer's call, and there were 142 fires over the three-day period including Halloween.

Two decades later, in 2017, after years of declining fire statistics on the night before Halloween, whether "Angels' Night" should continue became an open question.

“At some point or another, we can’t do this every year for the rest of our lives," said the Rev. Edgar Vann, a Detroit police commissioner. "That doesn’t make sense.”

In 2016, The News reported, Detroit experienced 59 fires during the three-day Angels’ Night volunteer campaign, roughly half the number of fires in 2014.

As for the reasons behind the precipitous drop, Fornell cited Detroit's many vacant property demolitions in recent years — roughly 20,000 since January 2014, according to the city's Neighborhood Improvement Tracker.

"The fuel is gone, so to speak," Fornell said. "You don't have to hide anymore, or fear what's going to happen. Police are involved, rec centers are involved, the fire department is involved. Now, it's just Halloween."

Last year was the first of Detroit's post-Devil's Night, post-Angels' Night era, and the first year of "Halloween in the D," a phrase coined by then-director of neighborhoods Charlie Beckham, at the press conference announcing the end of Angels' Night.

Detroit has tried to get rid of the Angels' Night name before.

In 1994, the year after a relatively quiet Devil's Night, city officials attempted to rebrand it as "Halloween Eve." That Halloween Eve, there were 182 fires set, the highest number since 215 in 1986, and three times the 1993 total.

One of the fires killed 18-month-old Destiny Wilson. There were 354 fires in the days surrounding Devil's Night in 1994.

Said then-executive fire commissioner Harold Watkins of Devil's Night 1994: "The citizens didn't come out. They felt we had it under control."

Detroit hasn't had more than 100 fires over the three-day period since 2010.

During the three-day period of Oct. 29-31, 2018, there were 16 total structure fires in the city. That was down from 35 structure fires during the same period in 2017, Detroit Fire Commissioner Eric Jones said at the time.

As Fornell said, that's "average" for a city with about 50 fires per week.