Devon Kareem Robinson is charged with 10 criminal counts, including murder and assault with intent to commit murder, in the May shooting in Detroit

Horrific testimony and recordings of frantic 911 calls dominated the first day of the preliminary examination for a 19-year-old Detroit man charged with shooting two gay men and a transgender woman to death.

Devon Kareem Robinson is charged with 10 criminal counts, including murder and assault with intent to commit murder, in the May shooting at a home in the 3700 block of Devonshire. 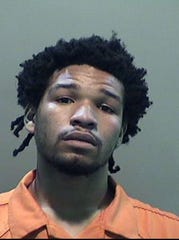 The victims, 21-year-old Alunte Davis, 20-year-old Timothy Blancher and 20-year-old Paris Cameron, a transgender woman, were shot to death in the living room of the east-side home following a party attended by about 15 people in the early morning of May 25.

Clifton Keys, a friend of the victims who also attended the party, described how a gunman came back to the house and sprayed the living room of the residence with gunfire.

Keys said victims' blood bled through the walls of the home.

Keys said he believes the shooter was Robinson because of the man's complexionand his "light brown eyes." The shooter, said Keys, was wearing a black ski mask and black skull cap.

Keys said five of the friends were sitting in the dining room area when they heard footsteps and then heard the gun shots that they initially thought were fireworks.  Keys said Cameron and Davis ran toward the kitchen area while Blancher and another friend, Armon Matthews,  fled to the basement of the home.

"I saw him walk in the living (and) for three seconds I sat in shock," Keys said. He testified that he fled to a bathroom on the same floor.

He added he did not see Davis breathing but saw Cameron shaking.

"I tried my best to stop Paris' bleeding as best I could," said Keys.

Keys is heard in the 911 calls crying and struggling to maintain his composure as he sought help for his dying friends.

Matthews, who said he was drunk and under the influence of marijuana, said the five friends gathered in the dining room at first thought they were hearing fireworks but soon "realized someone was shooting at us."

"It was just crazy ... shocking," said Matthews during the preliminary examination before 36th District Court Judge Michael Wagner. "We didn't see it coming."

Matthews also called 911 as he desperately tried to save Blancher's life. He said it wasn't until he and Blancher got into the basement that Blancher realized he had been shot and pointed to the area (in the chest) where he had been hit.

A 911 dispatcher instructed Matthews how to try and stop the bleeding but Matthews said he had to let go of his friend once a Detroit police officer got to the scene, pointed a gun at him and instructed him to release his hold on his friend.

Keys said he and his friends met Robinson hours before the shooting at a gas station near Mack and Devonshire. He said Cameron was immediately attracted to Robinson and invited Robinson back to the Devonshire house which was the home of one of the group's friends.

Video of the friends and Robinson at the gas station was shown during the preliminary examination.

Robinson allegedly walked to the house after getting an invitation from Cameron to "come through." While there, according to Keys, Robinson allegedly partied with the friends and later left with a "blank" look on his face after being "hugged up" with Cameron, said Keys.