Detroit — The city's ombudsman is flagging a "failure of the system" that allowed for a city employee to secure a contract for several emergency demolitions.

Detroit Ombudsman Bruce Simpson on Tuesday shared details from his investigation with Detroit's City Council, saying the conflict was "overlooked" as the now-former city worker moved through the process of gaining approvals, even disclosing in paperwork that he'd been employed as a Detroit firefighter.

"When we looked at this information, we looked at it as a failure of the system that is supposed to manage this process," Simpson told council members. "The individual appropriately articulated in documentation. At some point, he indicated 'I am a city employee.'" 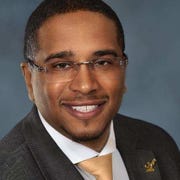 Simpson said his office received the complaint involving the company, identified in the report as Next Detroit Inc., on Oct. 8. The following day, Simpson's office conducted a site visit for a property that had been on Nuernberg, which had been identified as a site torn down by the company.

The award letter for the $13,025 demolition for the Nuernberg property was issued on Sept. 25.

It was confirmed in the days that followed, Simpson noted, that the head of the company, Mark Green, had submitted his retirement paperwork to the city's fire department. That submission occured after the completion of the demolition work.

According to Simpson's report, the city's Office of Procurement confirmed that Detroit Next had been awarded the work for at least three properties while its CEO was a city employee. The Nurenberg property, however, was not among those disclosed by the administration as a site that was demolished by the company, Simpson's review found.

Green has not yet been paid for the work, according to city officials.

Although the pre-qualification application process is stringent and Green's status was disclosed, the procurement office "failed to alert" the city's building department or Detroit's Building Authority, which manages demolition in Detroit.

Simpson also noted a "lack of timeliness" in receiving answers from the administration, noting that a review conducted by Detroit's auditor general into city-funded demolition work also faced hurdles in obtaining answers, resulting in two subpoenas being issued.

Simpson provided his findings as the council decided Tuesday not to give the go-ahead to place a $250 million bond proposal on the March primary ballot.

"The auditor general has outlined the lack of timeliness and appreciation for any report, inquiry or communication that does not fit into the narrative that is currently being pushed," he said. "I believe that played a part in the delay in the information we received."

"He admitted he was an employee, and the city still let him perform the emergency demolition," she said.

Boysie Jackson, Detroit’s procurement head, also told council members Tuesday that Green did disclose during the process that he had been a city employee. The administration moved quickly to correct the problem, he said, and has since tightened up its procedures.

"It was one bid and was stopped after that," Jackson said. "The company did not get any additional rewards. In terms of timeliness, we felt we jumped on it the next day, verbally, to make sure we shut this down."

Green, who is now retired, is no longer affiliated with the company, and it has not received another contract with Detroit, Jackson added.

According to responses included in Simpson's report, Detroit Next applied for its wrecking license Aug. 17, 2016. The company had never held regular contracts with the city for commercial or residential demolitions.

The administration, he said, does recommend that Green be paid for the emergency work that he did.

"It was a one-time thing that happened in the haste of trying to get local companies to do the job," he said. "He is Detroit-based. But still, we do agree that he should not have gotten that emergency work."

Simpson said Tuesday that his office isn't pointing the finger at any one particular area of the administration but said an issue like this "hurts the program as a whole, and ultimately that hinders our ability to fight blight."

Simpson also noted concerns over the future of the city's demolition operation including who the program director will be or whether existing building authority staff will migrate over.

"There are so many missing pieces," he said.