Detroit — For two hours Thursday, the din of voices at the Checker Bar rose and fell during a discussion of a complex topic that can spark strong reactions: race relations.

Following an African American customer alleging that a worker at the downtown spot mistreated him this year, its staff partnered with the Detroit Civil Rights, Inclusion and Opportunity Office and the Michigan Department of Civil Rights for a forum aimed at discussing an issue that affects the region’s residents.

The goal of the “Let’s Talk About Race” event, coordinators said, was to bridge divides.

Such conversations “are really long overdue in the city of Detroit,” said Charity Dean, director for Detroit’s Civil Rights, Inclusion and Opportunity Office. “I don’t assume that something so heavy (like racial issues) can be improved by a conversation, but essentially, we want to begin to contribute to that growth.”

Wendell Fleming, the patron whose encounter sparked the dialogue, declined to detail the incident at the bar, which state officials said led to a worker’s firing. But he noted the need for a meaningful conversation.

“I wanted to make this negative situation a positive one,” he told the nearly 100 participants. “My experience isn’t the only experience that’s happening to a lot of us,” he said.

The bar's owner pointed to the large turnout for the talk Thursday. “A lot of people were hungry for it,” said Tim Tharpe.

Attendees split into small groups for breakout discussions. Seated at checkered tables under the bar’s red and white lights, they responded to several questions highlighting their experiences with race in the region as well as ways to change it.

Some described racial relations in the area as poor or tense. They cited numerous potential factors, including bias, economic inequality, inaccurate depictions on social media of different races and lack of diversity in some neighborhoods.

They offered a range of solutions, including increasing investment in schools, advocating for more inclusive policies in housing and jobs, and sensitivity training or cultural immersion.

The discussion encouraged Valencia Cade, an educator from Detroit. She viewed the event as helpful in “healing the city and improving trust."

"It’s important we have these safe spaces,” she said. “There’s a lot of frustration. ... We need a forum.”

“It’s a necessary conversation, especially as Detroit is changing,” he said. “It’s important to have these discussions, because if we don’t, we allow the issue of racism to hide in the corner. It’s all about building things. It starts with these first steps.”

Participants also were urged to sign “pledge” cards showing their commitment to “be open and understanding of those who don’t look like me.” 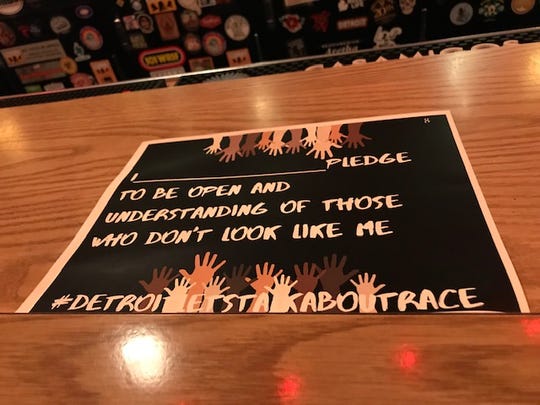 The participants were asked to sign cards pledging not to discriminate. (Photo: Mark Hicks)

City officials are gathering feedback from the forum, Dean said, and a website dedicated to providing resources on race relations is expected to be operating soon.

It also could be the first in a series of similar community meetings, said Anthony Lewis, director of business and community affairs at the Michigan Department of Civil Rights, who helped facilitate the discussion. “This is just the beginning,” he said.