Officer Rasheen McClain shot while investigating a reported home invasion on the city's west side; his colleague also was wounded in the shooting

Detroit — The 12th Precinct of the city's Police Department is hosting a vigil for slain Officer Rasheen McClain at 5:30 p.m. Monday.

Chief James Craig, police executives and the department encouraged all citizens to attend and participate in the singing and prayer. 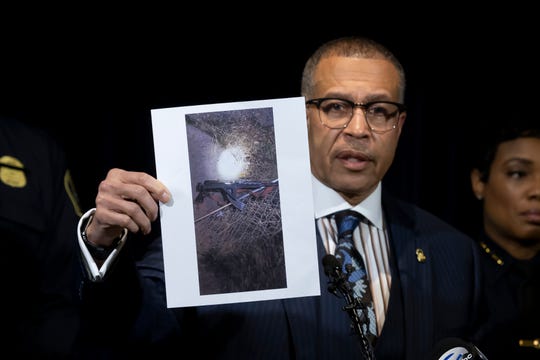 Detroit police Chief James Craig shows a photograph of a weapon allegedly used by the suspect Wednesday in the death of Officer Rasheen McLain. (Photo: David Guralnick, The Detroit News)

The gathering is scheduled for the west parking lot of the station, at 1441 W. Seven Mile Road.

Public viewings are set for Dec. 4 and 5 at Fisher Funeral Home and Cremation in Redford Township, followed by a Dec. 6 funeral at Greater Grace Temple in Detroit.

McClain died on duty Wednesday, allegedly shot by a 28-year-old man, who has yet to be charged. A colleague also was wounded in the shooting.

The Wayne County Prosecutor's Office said Friday it had received a warrant request from Detroit police related to McClain's slaying but returned it to the department for "further investigation."

At about 7:30 p.m. Wednesday, McClain and his partner, Phillippe Batoum-Bisse, went to Wyoming Street on the west side to investigate an alleged home invasion, reported as in progress.

When they arrived, a girl’s relative told the officers her ex-boyfriend, who was paroled in March after spending eight years in prison for assault, entered the house and was armed.

McClain led his partner and two other officers into the house, Craig said.

After ensuring nobody was on the top two floors, the group of officers descended to the basement.

As they got about halfway down the stairs, the suspect fired two shots from a Russian-made SKS semi-automatic carbine rifle, police said.

One killed McClain and the other injured Batoum-Bisse in the ankle, police said.

They said the parolee's obsession with the girl sparked a two-week-long shooting rampage.

In addition to facing accusations of killing McClain, the man is suspected in a shooting Monday on the east side Detroit’s east side, where two men were shot as they sat inside a car in the vicinity of 3200 Harding.

One man died and another was injured.