The funding is part of $423 million in grants nationwide from the U.S. Federal Transit Administration

The Federal Transit Administration is awarding Detroit $8.5 million and Flint $4.3 million to improve their bus systems The Detroit News

Romulus — The cities of Detroit and Flint will receive $12.8 million in federal grants to modernize busing services.

The funding announced Monday is part of $423 million in grants to 94 projects in 42 states and Washington, D.C., from the U.S. Transportation Department's Federal Transit Administration to purchase buses and related equipment nationwide in efforts to update infrastructure and improve services.

The Michigan projects stood out from 318 eligible grant requests because they aim to increase safety and reliability and improve existing infrastructure, K. Jane Williams, acting FTA administrator, said during a press conference near Detroit Metro Airport.

"Buses make up the backbone of public transportation services across America and here in Detroit," Williams said. "Buses are considered the workhorse of the industry as they provide approximately 5.3 billion trips each year, offering riders vital transportation to jobs, health care and school activities." 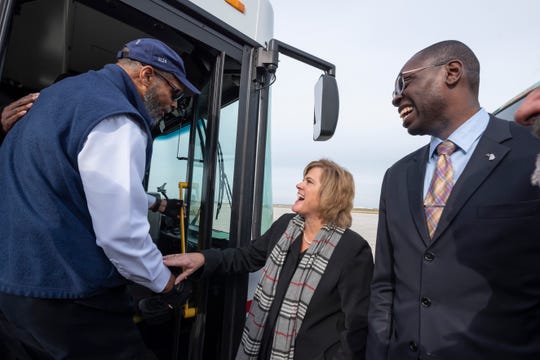 Officials say the equipment will reduce the frequency and cost of repairs, ease the process for software updates, improve boarding times and expand payment options, including a new regional fare card that also can be used on Suburban Mobility Authority for Regional Transportation buses. As a result, riders will have more touch-and-go payment options, reducing the need for cash.

"It's one app for all," said Angelica Jones, Detroit's interim transportation director.

"I think it's important to recognize the diversity and breadth of people that rely on public transportation to meet their needs," he said. "This is vital infrastructure. I am thankful we will always be ready and willing to partner with anybody who is willing to invest in our infrastructure that will make our communities healthier, safer and more vibrant."

In Flint, up to 25 new propane and compressed natural gas buses will be purchased for the city's Mass Transportation Authority with a $4.3 million grant. The buses will replace old diesel versions, some of which have traveled up to 1.7 million miles.

"We have been working to replace our fleet of diesel buses with new alternative fuel vehicles that will better serve the public, provide for reliability, provide for safety that is so needed and moving away from keeping those older buses on the road," Benning said.

Detroit recently replaced 30 buses in its fleet with another 26 planned. In August, the FTA also granted the city's transportation department and SMART $2.6 million for electric buses and charging infrastructure.

Flint has researched electric buses, but other cities have reported challenges with range, requiring them to increase their fleet size, Benning said. In terms of renewable energy, he sees more potential with hydrogen energy cells, because Flint already has a hydrogen power station.

"We've been using it for 10 years," Benning said. "Hydrogen works in Michigan."

The Federal Transit Administration's Williams also used her trip to Michigan to promote the United State-Mexico-Canda trade agreement that is awaiting congressional approval.

"The innovative provisions of the USMCA may help our transit agencies and contractors complete projects more quickly, particularly when they import materials," she said, "so it is critical they get the deal done."