Criticism over his past isn’t swaying commitment to serving Detroit, Mark Kumpf says

Detroit — When Mark Kumpf arrived in Detroit as the city's new animal control director, some animal welfare advocates made it clear he wasn’t welcome.

He was met with protests and an online petition that called for his ouster over his record with the Animal Resource Center in Montgomery County, Ohio, where he was ultimately fired.

In his first interview since taking over the city's long-troubled department, Kumpf said despite the critics, he plans on sticking with Detroit for the long haul.

"If folks want to protest, they certainly have the right to protest," said Kumpf, who joined the office in September. "These folks need someone, and that's why I'm committed to making sure that we can make a difference." 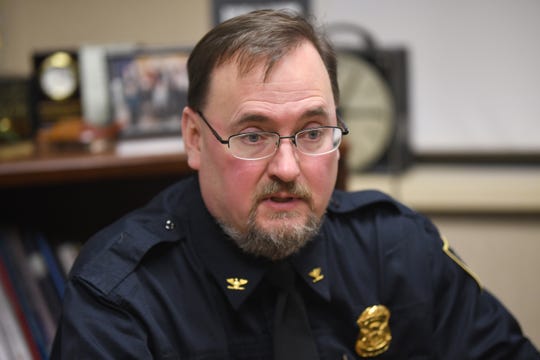 Mark Kumpf, new director of Detroit Animal Care and Control, talks about the new structure for animal care being implemented in Detroit in an interview on Dec. 3. (Photo: Max Ortiz, The Detroit News)

Kumpf was selected for the $100,000-per-year position following a national search to fill the post, which had been vacant since Charles Brown resigned in the spring.

His hiring came amid an outcry from the community for new leadership and stronger regulations after three pit bulls fatally mauled a 9-year-old girl in southwest Detroit.

Under the overhaul, Kumpf will head animal care, focusing on sheltering, vaccinations, licensing and finding new homes for the center's adoptable animals.

When he joined the office this fall, Kumpf said the average stay for a dog was more than 40 days. Now, it's under 30 days, he said. The office also has been holding adoption events twice a month and placed close to 200 dogs in the past eight weeks.

"Our goal is to be a halfway house," he said. "We want you to be there until you either go home or you go to a new home."

Kumpf's firing in Ohio, according to reports by the Dayton Daily News, came amid criticism from animal rights advocates over high euthanasia rates and a critical report from independent consultants, Team Shelter USA, that noted the rescue center improperly stored vaccines and reused syringes.

He declined to discuss his departure from the job, citing pending litigation. He deferred comment to the Montgomery County Prosecutor's Office. A spokesman for the office did not immediately respond to a request for comment.

"From my perspective, I've transitioned to a new job and my focus here is Detroit and making lives great for the people and pets in Detroit," Kumpf said. "The things we've accomplished over the last couple of months speak more than me trying to go back and answer 'He said, she said' type of allegation. The proof is in the performance."

Records from the Common Pleas Court of Montgomery County, show Kumpf and the Animal Resources Center were among the defendants in a 2018 civil suit over the destruction of a Kettering family's rescue dog.

Josh and Lindsey Glowney allege in the complaint that their dog was improperly seized in 2016 and taken to the pound. The dog was later euthanized at the center, without the family's knowledge or consent, according to the suit.

Kumpf was accused of negligence and failing to establish adequate policies, practices, and training for employees and volunteers, which the suit contends, would have protected the dog and others from "unnecessary killing."

Another pending civil case, filed in 2015, involves the estate of Dayton resident Klonda Richey, who was killed Feb. 7, 2014, by dogs owned by her neighbor. The suit contends Richey had complained to Kumpf that the dogs were an imminent threat to her safety but he failed to act.

Montgomery County spokeswoman Brianna Wooten declined to comment on Kumpf's service there or the terms of his separation, saying she cannot discuss personnel matters.

"He is the hardest working individual I have ever been associated with. He typically puts in long hours and he's very dedicated," said Mays, executive manager of Animal Control Training Services, a Kansas-based officer safety and animal behavior training group.

Mays said Kumpf also has worked as a trainer for his company and is well-versed in blood sports, including dog and cockfighting, and has a long history of serving as an expert witness in related cases.

"He's a smart man, no doubt about it," he said. "Mark is the perfect fit (for Detroit). He's going to face that challenge head on."

Theresa Sumpter, director of the Detroit Pit Crew Dog Rescue, helped organize a rally outside Detroit's City Hall in October, urging the city administration to get rid of Kumpf.

The city, she said, "seems very determined to keep him" but she doesn't believe he's the best option.

"You have a struggling city, struggling government organization, why pick a leader who does not have a good track record in his previous place of employment," said Sumpter, adding she's not met with Kumpf yet but is willing to for the sake of the city's animals.

Detroit Mayor Mike Duggan and members of his administration have defended Kumpf and his knowledge of Detroit and credentials that span more than 30 years.

Kumpf served in various capacities at the Animal Resource Center in Ohio from 2006 until his departure last December. As the chief county dog warden, he oversaw the office's $3.2 million operating budget and supervised animal shelter staff. He also provided training to county animal workers and law enforcement, and headed a dog licensing campaign, according to his resume.

Previously, he held other animal care and association roles in Ohio, Kansas and Virginia.

Kumpf, an Ohio resident who is commuting to Detroit, said he's talked with area animal welfare groups that have been willing, including Detroit Dog Rescue, and remains open to face-to-face discussions with others on proposed improvements.

Kristina Rinaldi, executive director of DDR, said she has met with Kumpf several times and supports the direction that the department is taking in its reorganization so far.

"In the past, there was zero consistency. It does seem that maybe we have somebody who is going to stay and we're going to have consistency," she said. "I do feel it's possible for him. He has a lot of challenges that he has not backed away from."

The city, like others, Rinaldi said, has had a hard time finding directors and animal control officers.

"It's hard when you work in a fishbowl and everybody has an opinion about it, and no matter what you do, you're not getting it right and there's backlash," she said. "It's a job that you can only work with the resources you're given. We're constantly working in a triage and trauma state."

Kumpf said the biggest challenge he faces is the condition of the city's overcrowded and run-down shelter, which officials said will be addressed under a $3 million capital project that's set to begin next spring.

Kumpf said he chose Detroit based on its commitment toward change and progress.

He said he toured the center before he interviewed and was impressed with the dedicated staff trying to make a better future for the animals in Detroit. "I wanted to be a part of that," he said.

Kumpf has four rescue dogs of his own — a Yorkshire terrier, Jack Russell terrier and two Chihuahuas. Two of his dogs, he said, are seniors and being treated for cancer.

"We take our work home with us," he said. "I like the old dogs, the ones that people won't go get."