JuJuan Parks, charged in the Nov. 20 shooting death of Detroit police officer JuJuan Parks, has a history of violence that dates to his childhood

The 28-year-old man accused of killing a veteran Detroit police officer last month made his first appearance inside a Detroit courtroom Thursday and was granted a defense request for a mental competency exam. 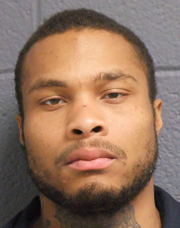 JuJuan Parks appeared before a 36th District Court judge for a probable cause conference in the Nov. 20 fatal shooting of officer Rasheen McClain. Parks' attorney, Evan Callanan Jr., asked the judge  for a forensics exam to determine if Parks is competent to stand trial and also whether he was competent enough to waive his Miranda rights. The exam is expected to take place at the Center for Forensic Psychiatry in Saline.

The next hearing date for Parks is scheduled for March 6.

Callanan also asked the judge to grant his request to have Parks housed in the Wayne County jail instead of at a Michigan Department of Corrections facility where he has been since his arrest saying that he needs his client to be closer in order for him to be able to assist him in his defense.

But Judge Michael Ciujan said "that's between the Wayne County Jail and the Michigan Department of Corrections."

Parks has a lengthy criminal record and troubling history of violence that dates to his childhood, according to court and prison records reviewed by The Detroit News.

Parks was convicted in 2011 of assault and felony firearm after an incident in which he allegedly held a gun to the head of a 19-year-old woman and shot her in the arm.

He was sentenced to a term of three years and seven months to 12 years and paroled in March of this year.

In that incident, Parks met the woman and another young female at a house in the 13800 block of Eastburn  on Detroit's east side in January 2011.

Parks, according to the victim's testimony at a preliminary exam in 36th District Court, of victim, was angry that the women had not been prompt in meeting up with him so he argued with them in the basement of the 19-year-old's home and tried to stop them from leaving.

The victim testified that Parks told her, "'I want the (expletive) keys,' and then he put a gun to my head."

The woman said Parks shot her as she tussled with him.

According to Michigan Department of Corrections records, Parks was convicted in October 2009 of attempted breaking and entering and imprisoned from then until August 2010.

Three and a half years earlier, when Parks was 16, he was accused of kicking and stomping a woman who found him in the basement of her home in the 18900 block of Reno on the east side. According to juvenile court records, Parks had gone to the home in August 2007 to see the 12-year-old daughter of another woman who lived in the home.

Court records did not indicate whether Parks was convicted in that incident.

Parks also was accused of breaking into a middle school in May 2006 to steal from a vending machine and of invading a home in the 3900 block of Harvard and stealing a car in September 2005, according to juvenile court records, which did not indicate whether he was convicted in either incident.

Wayne County Circuit Court records from both the criminal and juvenile divisions indicate that Parks has suffered from a "closed heart injury," that his father died when he was young, and his mother had suffered a series of stroke and was unable to "properly control (Parks') behavior and failed to bring him to court" when scheduled.

Parks is accused of shooting McClain, 46, in the neck and wounding his partner Phillippe Batoum-Bisse after they responded to a 911 call of a home invasion at a home on Wyoming near Chippewa on Detroit's northwest side.

Police allege the parolee's obsession with a young female sparked a two-week shooting rampage that ended with the officer's death.

In addition to killing McClain, Parks is believed to be responsible for a Nov. 18 shooting on Detroit’s east side, where two men were attacked as they sat inside a car in the vicinity of 3200 Harding, police said.

One of the men died and the other was injured. Parks has not been charged in that shooting.