Detroit — A Wisconsin-based group wants Detroit police to uphold the separation of church and cops, but police chief James Craig said the demand doesn't have a prayer.

The Freedom from Religion Foundation of Madison, Wisconsin, recently sent Craig a letter complaining that Police Academy graduations are held at Greater Grace Temple on Seven Mile, which it says violates the Constitution. 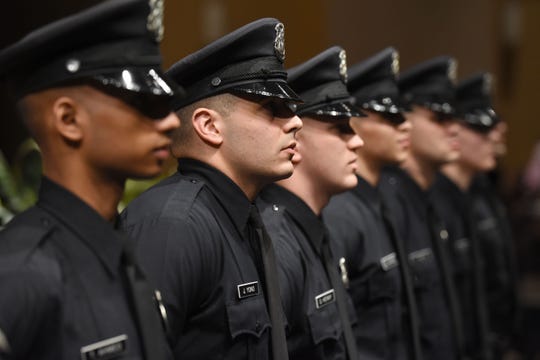 “The selection of any house of worship as a site for City-sponsored events demonstrates the City’s preference for religion over non-religion, and in particular Christianity over all other faiths,” the letter said. “This sends a message to graduates and members of the audience who are non-adherents that they are outsiders.

"The use of churches for public ceremonies is inappropriate, and raises many constitutional concerns. We urge you to refrain from using houses of worship for future public events," the letter said.

According to the letter, which was unsigned, a "concerned citizen" contacted the foundation and complained about the practice of holding police graduations in churches.

Despite the group's objections, Craig said he'll continue using churches for graduations and other events.

"We stand firm," the chief said. "As an option, we'll continue to use houses of worship for our graduations. That doesn't mean we're forcing our religious beliefs on anyone. One factor is, these churches donate the space, so there's no cost to taxpayers.

"We could hold the ceremonies downtown, but then people would have to find parking, and pay money for that," Craig said. "So this saves taxpayer money, and it saves money to the families of our graduates."

As recently as 2008, Detroit police graduations were held at the former Cobo Center, although in 2012 the ceremony was held at Second Ebenezer Church. Most of the ceremonies have since been held in Greater Grace or Second Ebenezer.

For decades, Detroit churches have hosted other city-sanctioned events, including police gun buyback programs and safety seminars. In 2010, Second Ebenezer hosted "Fugitive Safe Surrender," in which people with outstanding warrants turned themselves in at the church, and their cases were adjudicated in the sanctuary by prosecutors and public defenders. 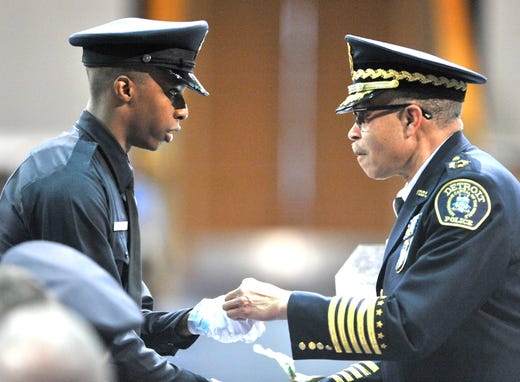 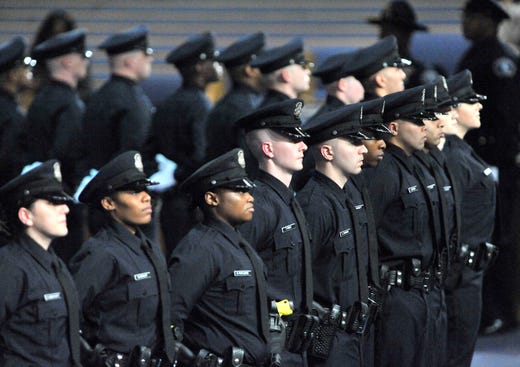 Newly sworn Detroit police officers stand at ease as they await loved ones to approach and pin police badges on their uniforms. Todd McInturf, The Detroit News
Fullscreen

Newly sworn Detroit police officers including Colin Titcombe, center, chant as they march out of the sanctuary. Todd McInturf, The Detroit News
Fullscreen 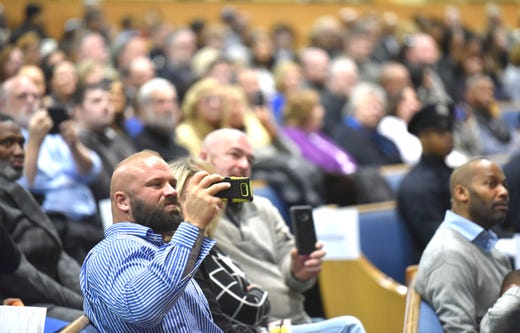 Valdet Zeqiri of Taylor and others record the graduation. Zeqiri is on hand to support his best friend and new police officer, Lamar Harris. Todd McInturf, The Detroit News
Fullscreen

Cadets stand at attention as they state, in unison, "The Law Enforcement Code of Ethics." Todd McInturf, The Detroit News
Fullscreen 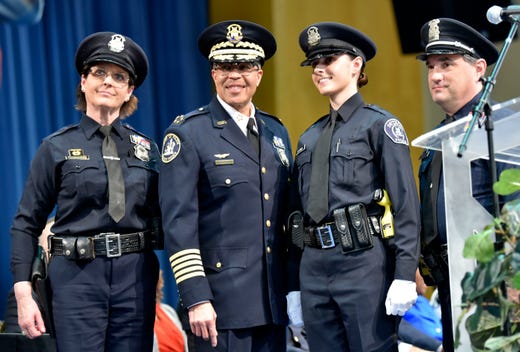 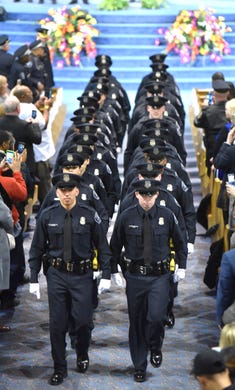 Newly sworn Detroit police officers chant as they march out of the sanctuary. Todd McInturf, The Detroit News
Fullscreen 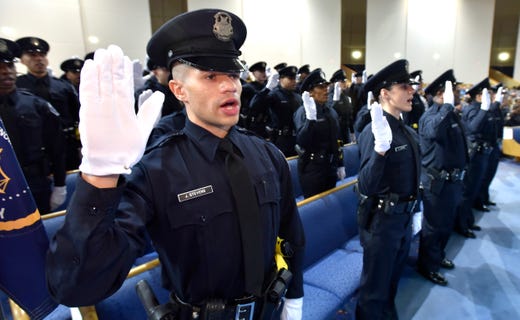 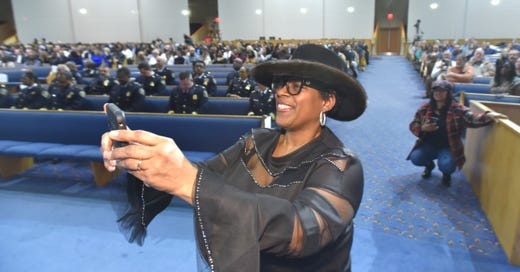 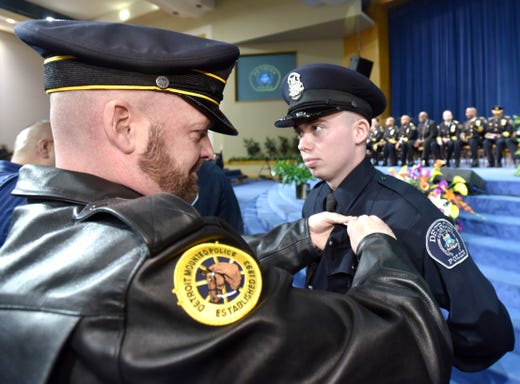 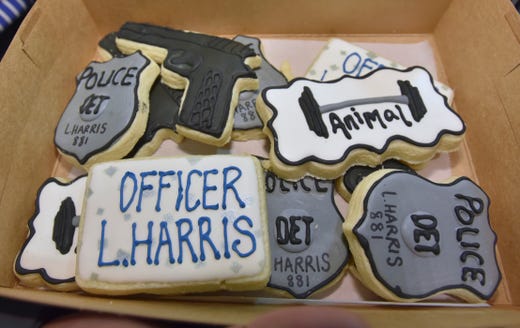 Former Detroit police deputy chief Jamie Fields, who is Jewish, said he often felt uncomfortable when city events were held in Christian churches, or when meetings were opened with Christian prayers.

"As a Jew, yes, it does bother me," said Fields, who retired in 2010. "They should find somewhere else to hold those graduations."

But Detroit police Sgt. Ahmed Haidar, who is Muslim, said holding the ceremonies in churches doesn't offend him.

"They're just using a facility; if a Muslim community center or mosque wanted to hold a graduation ceremony, I'm sure the city would accommodate that too," Haidar said. "I don't have a problem with it."

The First Amendment's Establishment Clause prohibits the government from making any law “respecting an establishment of religion," although there are differing legal opinions about whether holding public events in churches violates that provision.

The U.S. Supreme Court has heard numerous cases through the years involving the separation of church and state, most recently in 2014, when the court ruled Christian prayers that open public meetings were constitutional.

That same year, the high court declined to hear a case testing whether a Wisconsin public school district had violated the Constitution by holding graduation ceremonies in a church auditorium.

In that case, the 7th U.S. Circuit Court of Appeals had ruled in 2012 that the Elmbrook School District should not have held its graduation ceremonies at Elmbrook Church, a nondenominational Christian church in Brookfield, Wisconsin.

"Regardless of the purpose of school administrators in choosing the location, the sheer religiosity of the space created a likelihood that high school students and their younger siblings would perceive a link between church and state," the Court of Appeals opinion read. "That is, the activity conveyed a message of endorsement."

"The cases in the past have been so fact-specific, they give you arguments about a particular situation, but not necessarily black-letter law that can be applied to other cases," he said.

"These kinds of cases have come up through the years, with people concerned that different governmental functions are held in churches," Dubin said. "Often, organizations like the Freedom From Religion Foundation will object to these things being held in churches, and that often causes the government agency to hold their functions in different venues. That tends to eliminate a lot of potential litigation of these cases."

When asked if the Freedom From Religion Foundation plans to file a lawsuit if Detroit police continue holding graduations in churches, legal director Rebecca Markert said: "It’s too early to talk about a lawsuit. We sent the letter and asked for a reply, but we haven't gotten one. We hope they respond, and then our next step would be based on their response."

"The changing demographics in our country are so that non-religious people are the fastest-growing segment by religious identification," she said. "That needs to be taken into consideration as the department moves forward.

"They need to find a secular location that would be comfortable for all the cadets' families," Markert said. "That would not only be constitutionally appropriate, but just good manners."

"This is not unusual," Craig said. "Religious institutions have always opened their doors to police — not just here, but in the other cities I've worked."