Detroit — In playing the title character from Shakespeare's "MacBeth," Sarah Lauderdale not only had to carry the heaviest of acting loads, she had to look within for answers as to why she was doing it in a prison setting.

"He was a good guy. He was a war hero. And he gets an inkling in his mind that he wants more, and it spirals out of control for him," said Lauderdale, 40, now five months removed from a four-year stay at the Women's Huron Valley prison in Ypsilanti, with just 10 months left on her parole. "And he has to continue to get people out of his way, to continue having what he has, and wanting what he wants." 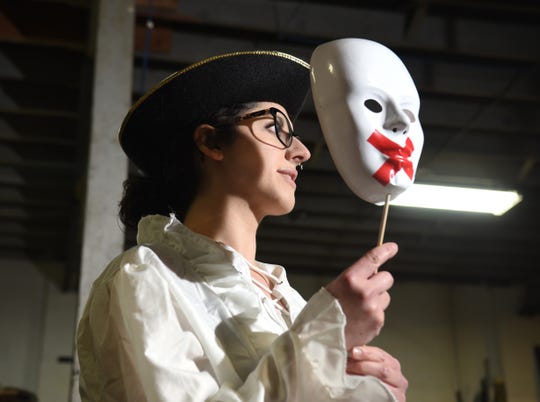 Frannie Shepherd-Bates, director of Shakespeare in Prison, speaks about the program that works with inmates at the Women's Huron Valley Prison. (Photo: Max Ortiz, The Detroit News)

It was desire spiraling out of control that landed Lauderdale in prison after she embezzled more than $100,000 from the Social Security checks of the clients of Michigan Ability Partners, which helps veterans and people with disabilities become self-sufficient.

"We were financially struggling," Lauderdale said. "I'm a very proud person. And I didn't want to let anybody know we weren't living this perfect life. I was like, well, if I just do it this one time, like this will help. We'll get back on our feet. And that didn't happen. Then I said we'll just need a little bit more. And it just spiraled." 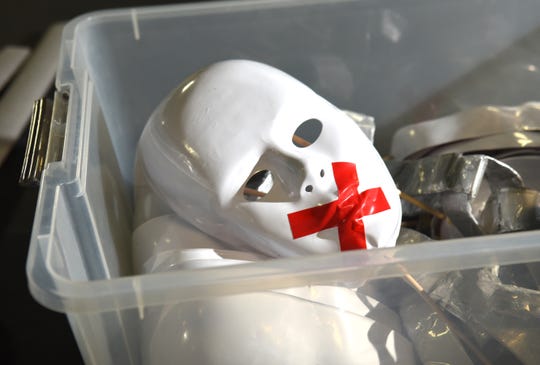 Props sit at the ready for Shakespeare in Prison in Detroit. (Photo: Max Ortiz, The Detroit News)

Five years and six figures later, the theft was discovered.

"It happened to be that my boss was in the office that day, and had to do a couple of things on my computer," Lauderdale recalled. "And that was it."

Studying the good soldier who became a cursed king, prodded always by the want for more, helped Lauderdale make sense of her highly public lapse in character.

"That character definitely helped me kind of work through my own issues and kind of come to terms with why I did what I did," Lauderdale said. "A lot of it came down to, I was angry. I had a decent life, but it wasn't what I had expected." 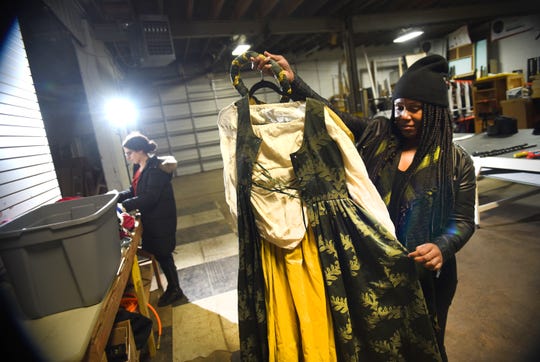 Frannie Shepherd-Bates (left), director of Shakespeare in Prison looks through costumes with Asia Johnson as they prepare for their prison theater program out of the Detroit Public Theater work space in Detroit. (Photo: Max Ortiz, The Detroit News)

That self-realization came courtesy of Shakespeare in Prison, offered at Women's Huron Valley since 2012.

"(Participants) may come in saying 'I'm a bad person, I'm a bad mother, I'm a heroin addict,' all these terrible things," said Frannie Shepherd-Bates, creator of Shakespeare in Prison, a program of the Detroit Public Theater. "But when you work in theater, you have to have empathy for the characters — if you judge them, you can't tell their story."

Shakespeare in Prison has a nine-month season, September to June. Right now the cast is studying "Hamlet."

Asia Johnson, 33, arrived at Huron Valley in 2011 after pleading no-contest to second-degree murder in her grandmother's death in 2009. She had seven and a half more years ahead before parole eligibility. Each day was darker than the last.

When a friend had to leave the housing unit in the 8 a.m. hour, and was happy to do so, all for something involving Shakespeare, Johnson thought it sounded boring. But she tried it anyway, and was cast as Ariel in "The Tempest" in her first season.

But in playing Juliet in "Romeo and Juliet," the girl who sacrificed and eventually lost everything for love, Johnson came to understand her own story better.

"To see two 14-year-olds thinking that they can't live without each other — I thought that when I was 23, 24," Johnson said.

For love, or at least her idea of it, Johnson said she passed on an academic scholarship to the University of Nevada, where she would have studied journalism. She went for orientation but returned to Detroit two days later. On the night of the fatal confrontation with her grandmother, her grandmother had been advising her on affairs of the heart.

"I made a lot of life-altering decisions for that relationship," Johnson said, including alcohol abuse and multiple suicide attempts. "It was like an intervention once a week at my apartment. I would come home and people would be on my couch like, 'OK, we need to talk.'"

She didn't see herself or her behaviors as the problem. If only he'd act right, she said, I'd be fine. 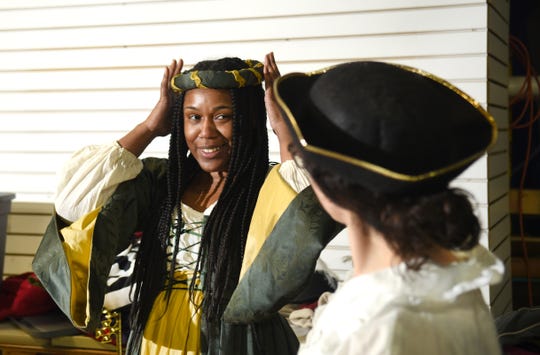 In October 2009, Johnson, 23 at the time, says she and her grandmother got into a "huge fight" whose details she can't recall now.

"I blacked out," Johnson said.

Hazel Vary, 77, died in the confrontation and her body was discovered days later, after Johnson turned herself in to police, The Detroit News reported at the time. A psychiatric report, filed early in the case, found that Johnson did not understand the charges against her. Eventually she would plead no-contest.

More than a decade later, she's never read the police report. Family has never asked what happened that night. On the day of this interview, Johnson had visited her grandmother's grave site for the first time. Her father is also there, along with her grandfather and an aunt.

"My dad's whole side of the family has died in the most tragic of ways," Johnson said. "To think I had a hand in that...I had to get out of there. It was a lot to deal with."

Johnson was paroled in October 2018, and works as a bail disruptor for The Bail Project, which partners locally with the Detroit Justice Center. Johnson spends her days posting bail for people jailed on bond of $5,000 or less. It's a time-consuming process; bonding one person out can take an entire day, between trips to the bank, the courthouse and the jail. Bail reform experts say defendants out on bond face better outcomes than people who remain jailed as their cases proceed.

"I try every single day to do things that move me so far past that, and so far opposite of that day," Johnson said. "I want to keep that there and live a life my grandmother would be proud of....I don't want to be Juliet. I don't want to feel like I need another human being to get through life."

Shakespeare in Prison does not teach job skills that result in degrees or certifications. Its aim, developing the "narrative identity" of its participants, is not easily measured or counted, but is crucial, Shepherd-Bates explained.

"They practice this kind of radical empathy on fictional characters, and then they start to practice it on the others in the group and then on themselves, gaining insight from those characters, and they start to define themselves differently," Shepherd-Bates said. "How do you see your way to doing good? If you've been told all your life that you're stupid, but then you come to realize, 'I can understand Shakespeare. I can. I can work on something for nine months with a group of people, and I may not like all of them and still accomplish things.'"

Chris Gautz, spokesman for the Michigan Department of Corrections, said the nine-month process, and the collaboration and vulnerability it entails, helps prisoners become more well-rounded.

"It's less about a performance at the end as it is everything that builds up to it," Gautz said. "They start seeing each other as equals, and depending on one another. People begin to discover themselves, and that they have talents they didn't know they had. If you can read Shakespeare, you can figure out how to open a bank account, or learn to work with computers." 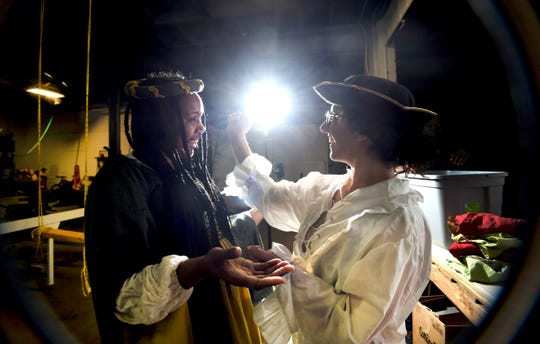 Lauderdale now lives with her mother, about 15 miles north of Jackson. She splits custody of a 16-year-old daughter and 13-year-old son with her ex-husband.

Until her parole ends in November, she can't have a checking account, charge card, or credit account, a term made slightly more manageable by her job as a waitress, a cash business.

Life still isn't what she had imagined, but in addition to changing her story at Huron Valley, she also learned horticulture and became skilled in crocheting and has started or is setting up businesses related to both.

None of it would have happened but for an ill-timed day off and four years away from the world, with plenty of time to study Shakespeare and her own history to make sense of it.

"I thank God that I got caught," Lauderdale said. "Keeping up the lie and the facade was so draining, it was a relief. Finally, somebody stopped me."