Revere Dock LLC has been slapped with $10,000 in fines and the threat of legal action from the city for illegally storing limestone there

Detroit — The owner of a worrisome site along the Detroit River whose dock collapsed in November, sending potentially harmful debris into the waterway, had amassed up to 40,000 tons of limestone there since the summer without a permit.

Revere Dock LLC has been slapped with $10,000 in fines and the threat of legal action from the city for illegally storing limestone there, said David Bell, the city's director of Buildings, Safety Engineering and Environmental Department. 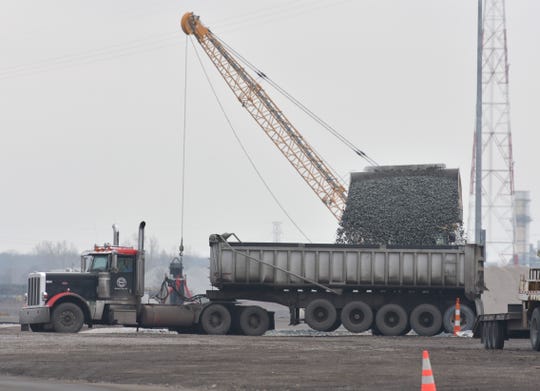 Material is loaded into a gravel-train semi at Detroit Bulk Storage on Tuesday. (Photo: Todd McInturf, The Detroit News)

The company gained ownership of the long-vacant site along Jefferson from Detroit in 2015 and leased it to Detroit Bulk Storage.

The illegal operation was uncovered by the city's building department after the Nov. 26 collapse, which prompted worries of contamination since potentially dangerous materials, including uranium, were handled there in the 1940s to develop nuclear weapons under the Manhattan Project.

Bell said his department has issued 28 blight tickets since Thursday relating to the incident. The citations have been steady, he said, and amount to about $2,800 per day.

"The fact is they have been illegally operating, and so we're going to make them feel it," Bell told The News on Tuesday. "It's very frustrating to me that a property owner would operate in this manner."

Bell said Revere Dock obtained permits in August 2016 for site alterations and improvements and later secured electrical permits. But "did not ever" submit a permit to have storage of aggregate materials, Bell said.

The site owner could not be reached Tuesday for comment. Adam Patton, a consultant hired by the company to oversee its response plan to the state, declined comment. Noel Frye, vice president of Detroit Bulk Storage, deferred comment to the site owner.

The city, Bell said, believes storage at the site began around July.

Bell said the city has 10 workers who conduct commercial property inspections every two years. The city has about 15,000 of them, but not all require inspections regularly, he said.

He acknowledged others might also be operating without a permit. But in light of the collapse, the city will boost inspection of the 150 or so commercial businesses along the river to annual.

The city issued an emergency correction order to Revere Dock in December and Detroit's law department is considering legal action to ensure compliance and that illegally stored aggregate there is removed.

During prior inspections at the site, most recently in March 2018, reports did not note any stored aggregate. Photographs of the site show it being fairly vacant until spring 2019.

In a Friday letter to the state's Department of Environment, Great Lakes & Energy, Lansing-based consulting firm PM Environmental said on behalf of Revere Dock and its partner Ericksons of Grand Rapids, the collapse "is not fully understood at this time."

An aggregate pile present in the area at the time of the incident, it reads, has since been removed and remaining material has been graded to provide erosion control.

The letter notes initial safety measures implemented, including a five-foot deep control barrier as well as plans to add a second that's 20 feet deep. The company plans to submit a more detailed response plan to the state on Jan. 24.

Once the plan is submitted, it will be reviewed by the state to determine whether it's acceptable, said Nick Assendelft, a spokesman for EGLE.

Late last week, state officials said soil and pond water sampling by the U.S. Environmental Protection Agency found lead and "many heavy metals including uranium." But the results of the testing of ponded areas on the property were "not unexpected," EGLE said.

One soil sample exceeded EPA removal management levels, according to the EPA.

Previous testing by EGLE "showed no radiation above background levels at each of more than 1,000 locations on the site, nor in river water upstream and downstream."

Despite that, southwest Detroit residents, environmental advocates, lawmakers and Detroit's City Council remain concerned about potential contaminants in the water.

Detroit Water and Sewerage Department Director Gary Brown on Monday told a council subcommittee that the water "is as safe today as it was the day before the spill, and the day after."

"We have a contained pipe water system," said Brown, who answered questions alongside officials from other city departments. "I'm not saying that there's not an environmental issue with contaminated soil. I'm saying it can't get into the water system."

Brown said the aggregate that fell into the waterway near the Ambassador Bridge, downstream from the treatment plant and intake valves.

"Unless the river changes direction — and that's not going to happen — there's no opportunity for that to move upstream to the intake values," he said.

Raw water tested by DWSD has come in "well below" any actionable levels, added Brown, who also serves on the board of the Great Lakes Water Authority.

Testing conducted by the water authority after the November collapse did not detect uranium in its downstream water intake. It did find several metals, such as aluminum, barium, boron and strontium but those, authority officials said Thursday, are naturally occurring in raw water. 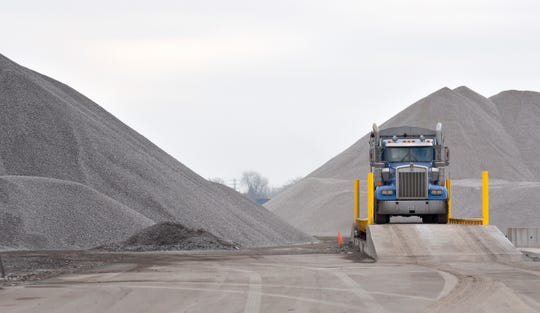 A gravel-train semi pulls onto a scale at Detroit Bulk Storage on Tuesday. (Photo: Todd McInturf, The Detroit News)

Results from testing to detect radiation in the water are anticipated this week, Brown said.

Detroit Bulk Storage's Frye has said the dock failure was tied to consistent, heavy rain the night before and high water eroding the area. Bulk storage is a sand and gravel storage yard business with a long-term lease on the property.

The limestone had been stored 100 feet from the waterfront and piled 40-50 feet high along about 300 feet of waterfront.

From 1943 to 1946 at the site, Revere Copper and Brass produced uranium rods at its Detroit plant and during the late 1940s and early 1950s rolled or produced uranium rods, according to U.S. Department of Energy records. Chemicals such as beryllium and thorium were handled on the site, government records show.

The site was considered to have "residual radiation" until it closed in 1984 and the manufacturing facility was demolished.

During a community meeting on the issue in December, Tracy Kecskemeti, southeast Michigan district coordinator with EGLE, said river sediment sampling and radiation testing earlier in 2019 concluded "there’s not a radiological hazard on that site."

Simone Sagovac, a member of the Southwest Detroit Community Benefits Coalition, said the spill still is concerning as is the lack of details over commitments from the site operators to ensure the public health is protected.

"We need transparency in development agreements, and we certainly need accountability from public health top to bottom and with all agencies," she told the council's public health and safety committee on Monday. "Everybody is culpable now. The city is as well for not enforcing that permit that was granted."

Justin Onwenu, an environmental justice organizer for the Sierra Club, pressed council Monday to expand the city's bulk material ordinance and asked that Detroit maintain a list of heavily contaminated parcels along the Detroit River. With rising water levels, he said, it's an increasing concern.

Gregg Ward, president of Detroit Windsor Truck Ferry, submitted a letter to the council committee, arguing the collapse is "cause for emergency action."

A large sinkhole on the site has developed and contaminated soils are continuously eroding into the Detroit River, he wrote.

"The color of the sinkhole water is unusual and alarming," Ward wrote.

EGLE tested six locations on the Detroit site in the spring. The testing at various depths of sediment for radium and thorium were at or below background levels, according to results provided to The Detroit News. 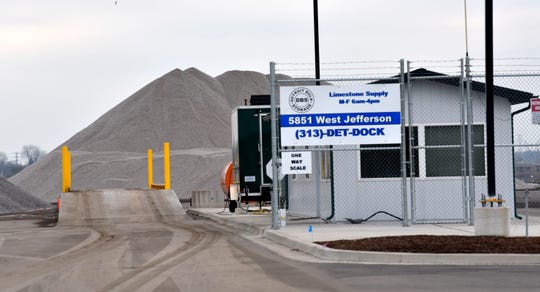 The front entrance of Detroit Bulk Storage at 5851 W. Jefferson in Detroit, is a sand and gravel storage yard. (Photo: Todd McInturf, The Detroit News)

The EPA, Assendelft said, did test in the sinkhole and soil testing close to that area. Officials intend to closely monitor the site and potentially conduct further tests.

"Any industrial site along the Detroit River, or any river for that matter with a history of manufacturing, is always going to be a concern with the safety of the public and cleanliness of water, and that's our main thing; to make sure the public's health and the environment is protected," he said.

So far, the company has moved the aggregate piles away from the water. It's in the process of completely removing the limestone from the site, Bell said.

The city, by law, can't tell the company it cannot apply for a permit to return the aggregate there going forward. But "we're going to make sure that they dot all their i's and cross all their t's."

"We want to send a message to this owner and any other property owner thinking about doing business the wrong way; it's not in your best interest," he said.

"The EPA has said that there is no hazard to the community at this time. I am hoping that it stays that way for everybody's sake."