The new chief judge of Detroit’s 36th District Court announced plans Thursday to make the courthouse more public-friendly by lifting a controversial ban on bringing pens and other writing instruments into the building.

The ban at the courthouse on Madison Street in downtown Detroit was implemented in May 2017. At the time, Court Administrator Kelli Moore Owen said the policy was ordered because court staff noticed that newly installed murals, featuring the city skyline, streets and symbols of justice, were being marked up.

In a news release, Judge William McConico said the “unnecessary“ policy had placed an undue hardship on those having to come to the courthouse.

“All restrictions banning members of the public from entering the 36th District Court with pens and pencils are henceforth rescinded,” the judge said.

"While pens and pencils will continue to be made available for public use throughout the Court, Security will no longer confiscate these items at the entrance,” he said. 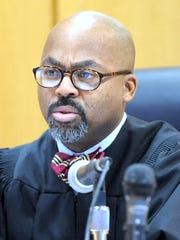 McConico added: “Many concerns have been voiced in the years since this policy was put into place. I have listened carefully to all comments and suggestions while considering them against the potential security risks that were cited by the Court’s previous administration when this ban was enacted. I have not found any justification that outweighs the extraordinary (hindrance) that such a policy places on the public.“

McConico said he hopes that members of the public will be able to “move through Security more expeditiously, and appreciate the increased access to resources while conducting business within the building.”

The new policy at 36th District Court comes on the heels of an announcement last week by the Michigan Supreme Court allowing citizens to bring cell phones and other devices into courthouses across the state.

In the past, mostly lawyers, police officers, court officers and in some cases journalists were allowed to bring in cell phones and other electronic devices into court buildings.