Hazardous waste plant in Detroit gets approval for expansion

Hazardous waste plant in Detroit gets approval for expansion

Detroit — A controversial hazardous waste facility that stores solid and liquid waste in the city has gained approval from state regulators to expand and continue operations for the next decade.

The Michigan Department of Environment, Great Lakes and Energy announced Thursday that it has approved a hazardous waste renewal and expansion operating license for U.S. Ecology's Detroit North facility — with conditions that limit daily hazardous waste deliveries and designate a route for truck traffic. 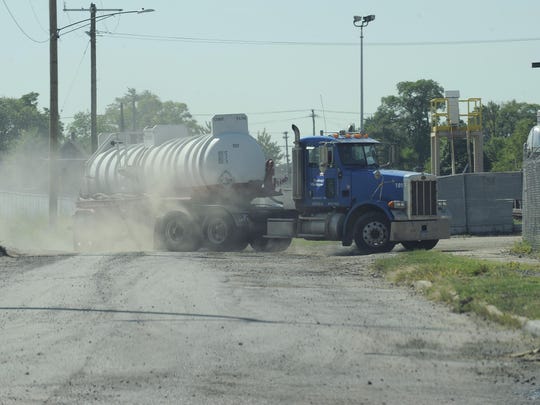 The site on Georgia Street applied for license renewal and expansion of the facility in 2013. Last year, EGLE accepted comment through mid-April, and it granted the license on Wednesday.

Under the renewed license, the container storage capacity increased from 41,000 gallons to 488,621 gallons, and U.S. Ecology is authorized to increase their solid hazardous waste treatment operations to 600 tons per day, according to the state's website.

In total, the renewed license allows storage of up to 500,739 gallons of hazardous waste in the container storage facility and up to 176,200 gallons in the treatment facility. No waste would be permitted to remain in storage permanently at the facility.

The plant stores solid and liquid waste from automotive, steel, plating and retail industry customers in the region, as well as hazardous household waste from area residents. It also offers treatment, disposal and recycling of waste.

No waste will be permitted to remain in storage permanently at the facility, according to licensing details on the state's website.

Dave Crumrine, a spokesman for Idaho-based U.S. Ecology, said in a statement that U.S. Ecology has no plans for storage modifications at this time. Any future increase would be achieved without increasing the facility's physical footprint.

"Safety is our No. 1 priority as we strive to maintain open and constructive relationships with all stakeholders including our regulators and most importantly our neighbors in the community," he said.

EGLE said in a Thursday news release that it determined that U.S. Ecology’s facility "satisfied all technical design, construction and operating standards" set forth by state and federal law.

"The goal of the license renewal is to make sure any hazardous waste that enters the facility is managed responsibly to protect human health and the environment," EGLE spokesman Nick Assendelft said in an email. "Conditions imposed as part of the renewal are meant to prevent the uncontrolled release of chemicals to the environment as well as prevent human exposure."

EGLE noted public input resulted in "significant changes" to the final operating license for the facility. Those include added conditions to the license, limiting the number of hazardous waste vehicle deliveries to 45 per day, designating a specific truck route to and from the facility, and an updated waste analysis plan.

Mark Covington, a lifelong resident who helped launch a coalition opposing the permit and expansion, said the community still has concerns about the materials being stored there or entering the water system.

The facility has been operating since the 1940s and waste management has been conducted at the site since 1974.

Crumrine said the renewal was granted after a thorough public review process, which led to modifications.

"The EGLE permit, oversight by regulators, and the engineering and extensive safeguards employed by the facility serve to ensure that waste is managed responsibly in order to protect human health and the environment and the neighboring community," he wrote.

Crumrine said the site provides "safe and compliant" waste treatment for industrial customers, and that the facility and others in the U.S. Ecology network, provide important remediation, including for PFAS, as well as the "green ooze" waste spill along Interstate 696 in Madison Heights.

"This facility is a vital part of the solution to provide safe and compliant waste management options," he said.

"This sends a signal ... that we have capacity here in Detroit and Wayne County to handle processing, storage and ultimately dumping of this waste in our landfills," said Robinson, who contends there's an over-concentration of waste facilities in the county.

U.S. Ecology also has been cited on multiple occasions for violating state and federal codes, including those that control air quality as well as administrative offenses.

"Why would we allow that to be built right here in the middle of Detroit's east side near Hamtramck?" added Robinson, who announced two bills in July to halt expansion of storage and processing facilities and ban processing of certain chemicals. "It's really disappointing."

Other members of the Detroit Caucus of the state House of Representatives joined Robinson in condemning the expansion. They also called on EGLE to conduct soil testing and health studies.

"The U.S. Ecology Georgia Street site in Detroit has committed over 150 violations and has dumped excessive amounts of arsenic, cyanide, mercury and other dangerous chemicals into our sewers," the statement on behalf of Reps. Tenisha Yancey, D-Harper Woods, and Joe Tate, Cynthia A. Johnson, Tyrone Carter, LaTanya Garrett, Sherry Gay-Dagnogo, Karen Whitsett and Leslie Love, all Detroit Democrats.

"It is imperative that this expansion is stopped and the demands of the community are heard. We must put an end to the constant assault on the health and safety of our families."

The state contracted with U.S. Ecology to dispose of PFAS after state officials identified more than 30 contamination sites in Michigan that tested positive for PFAS in 2018.

The location is currently being used as a staging area for cataloging and documenting PFAS-containing solution from fire departments and commercial airports across the state. It then is sent to Idaho for proper disposal, said Assendelft, the EGLE spokesman, in an email.

Some of the PFAS already was shipped to Idaho from the site this week, he added.

PFAS are chemicals widely used to create non-stick surfaces including firefighting foam, Scotchgard, Teflon and food wrappers that are resistant to water, grease or stains.

There is evidence that exposure to PFAS can lead to adverse human health effects and have been linked to thyroid disease, increased cholesterol levels, and kidney and testicular cancers, according to the EPA.

"Regular, unannounced inspections are performed by EGLE to make sure U.S. Ecology is adhering to license safeguards and technical design, construction, and operating standards required under state and federal law," Assendelft said.

The new license allows the company to operate its storage and treatment facility for the next 10 years, before seeking renewal on Jan. 29, 2030.