Detroit — After Detroit police Capt. LaShanna Potts saw her partner gunned down during a 1999 sting operation, she says she felt shock, anxiety, depression, guilt — and a desire to end the pain by killing herself.

"We were always taught that as cops, we have to deal with things and get back to work," Potts said. "The only thing I knew to do was drink and hide the pain in a bottle. I had survivor's guilt and thoughts of suicide." 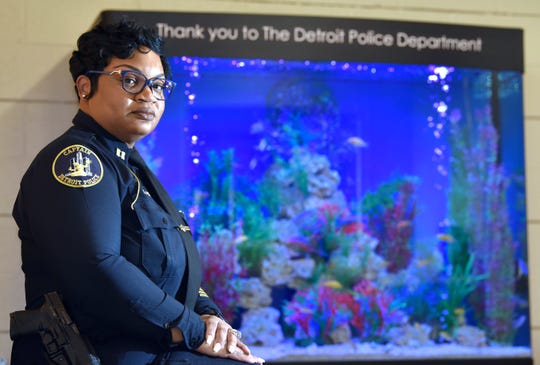 It's a feeling many police officers who've experienced trauma struggle with — and which a growing number of cops aren't able to overcome.

A record number of current or former law enforcement officers in the United States died by suicide in 2019, according to Blue H.E.L.P., a nonprofit that works to reduce the stigma around mental health issues in law enforcement.

According to figures compiled by the organization, 228 current or former officers died by suicide last year, compared with 172 in 2018. Through January, there had been 15 officer suicides in 2020, according to the group.

Police officers face a high risk of suicide because of the violence and trauma they regularly deal with, said Potts, who is a member of the Detroit Police Peer Support group that helps fellow officers deal with the stress of the job.

"We can no longer ignore the fact that officers experience so many terrible things on this job, and they need help," said Potts, who was working as a decoy in a prostitution sting on Feb. 5, 1999, when her partner, Richard Scalf, was killed. Another officer, Diaz Graves, was injured.

"This Bronco pulls up with two men in it, and I had a conversation with the driver," Potts said. She said the man solicited her for sex, and she signaled to Scalf and Graves to move in to arrest him.

"One of the men started to run, and he turned around and fired shots, striking both of the officers," Potts said. Graves survived gunshots to the head and stomach, but Scalf was killed after a bullet struck him through a gap in his bulletproof vest. 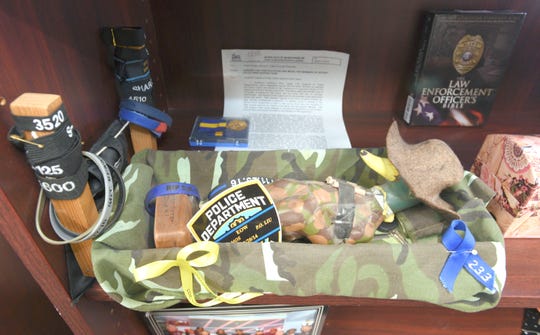 Potts keeps a basket of mourning bands and other items from police officers who have died in the line of duty that was given to her by former assistant chief Steve Dolunt when he retired. (Photo: Todd McInturf, The Detroit News)

"We had a debriefing, and we made our statements to homicide, but there really was no aftercare," Potts said. "The department didn't know how to address trauma at the time. Thankfully, that's changed."

"We've got to remove the stigma, and tell officers who are struggling that it's OK to ask for help," Craig said. "When I got here, there was no peer support program, and there was a huge need for it."

"A lot of people in law enforcement have the attitude, 'I can handle anything; bad things come with the turf, but I can deal with it; I don’t need any help.' But they need to realize that asking for help is not a weakness.

"There has been a cultural shift in recent years, where there isn't as much of a stigma, but it's still there," Bouchard said. "So you have police who see these terrible things, and they don't think they can ask for help. Also, police officers have a firearm with them all the time, so when they have these dark moments, that firearm is readily accessible."

"Police officers see some terrible things on the job — and then, they go to get a cup of coffee, and some coffee shop employee writes 'pig' on the cup," Bouchard said.  "It all boils together in this swirling pressure cooker."

In one such incident, a police officer in Oklahoma bought Starbucks for 911 dispatchers working on Thanksgiving only to find the word “PIG” printed on the cups’ labels.

Bouchard, head of government affairs for the Major County Sheriffs of America, said the organization plans to release a report in February about law enforcement suicides, and how to prevent them.

"As part of that, I'm designing a program where we'll bring in experts to talk about this issue, and how to implement best practices," Bouchard said. "We need to get better at helping these people through those dark days." 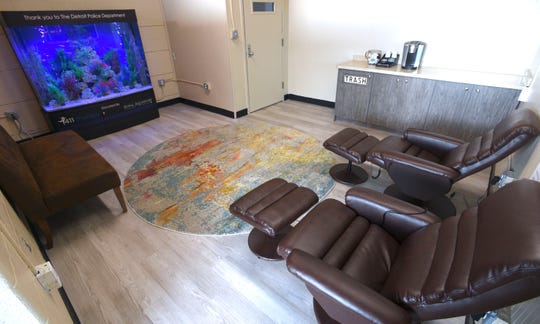 "Being fit helps with stress relief," said White, who plans to counsel first responders after he retires. "We have fitness facilities in all our precincts, and partner with Planet Fitness." The workout chain has facilities in the 11th and 12th Precincts, and another planned in the 5th Precinct.

David Edwards, a reserve police officer in Taylor and Woodhaven, and a police chaplain in Taylor, Woodhaven and Monroe, started the 227 Project, a nonprofit that helps cops, after his son, Taylor police Cpl. Matthew Edwards, was shot to death July 23, 2010, while investigating a home invasion. Edwards said people should watch for suicide warning signs.

"There are some signals that stress is affecting someone," he said. "Any emotional responses out of the ordinary, or physical symptoms of distress that could be stress-related, which can be headaches, cardio or gastrointestinal problems. Basically, just watch for changes in people; anything out of the ordinary could indicate there's a problem."

While most experts agree police officer suicides appear to be rising, accurate statistics are difficult to come by because of several factors. Not all police departments report suicides, and some are classified as accidental or other causes.

The Police Executive Research Forum in Washington, D.C., released a report last year, "An Occupational Risk: What Every Police Agency Should Do To Prevent Suicide Among Its Officers," which outlined the difficulty in getting accurate data on officer suicides.

"Unlike with line-of-duty deaths, there is no official central repository for information about how many suicides take place among law enforcement officers and under what circumstances," the report said.

The report cited Blue H.E.L.P., which began tracking officer suicides in 2016, as doing "an outstanding job in compiling statistics ... obtained through agency reports or open-source information. But its data are incomplete and almost certainly under count the actual number of law enforcement suicides.

"This lack of accurate and comprehensive data hampers efforts by police and sheriffs’ agencies to develop effective suicide prevention strategies, and to know whether their efforts are making a difference," the report said.

Novi police chief David Molloy said he plans to start a peer support group. In 2016, a Novi traffic officer killed himself, and Molloy said a recent homicide by a woman who allegedly fatally stabbed her 2-year-old son rekindled concerns about his officers' mental health.

"That was tough on the people who responded to that scene," the chief said. "The officers involved stayed in touch with each other all weekend, talking about it, and they were meeting with the doctor 4-5 days after that.

"Anyone who touched that case in any way, we want them to know they're supported, and we'll make services available to them," Molloy said.

After her partner was killed and she began drinking heavily, Potts said she was able to pull out of the downward spiral, thanks to her mother, who also was a Detroit cop.

"She saw what I was going through, and she made sure I got help," she said.

Potts said helping other officers in need helps her deal with the memories of her slain partner.

"It still bothers me, but I found helping other people is helpful for me," she said. "There are days where you struggle. That's why I'm so passionate about doing Peer Support.

"I wish we'd have had that when I first came on the force," she said. "I would've been able to talk to other officers who'd gone through similar experiences, instead of feeling alone in the world, and like only I knew that pain."