Gilbert getting back into flow of work 8 months after stroke

“When you have a stroke, here’s the problem with it: Everything is hard,” he told Crain’s Detroit Business in 1st post-stroke interview

Gilbert getting back into flow of work 8 months after stroke

Detroit — After a life-changing stroke, Quicken Loans founder and Chairman Dan Gilbert is going to work at his downtown headquarters one to two days a week and he's already trying to focus on two of his biggest downtown developments in the works.

Eight months after his stroke, the self-made billionaire is far from his legendary hard-driving pace, he conceded in his first post-stroke interview to Crain’s Detroit Business.

Gilbert, 58, uses a wheelchair and is partnered with a service dog, Cowboy. He walks with a cane but struggles to move his left arm. He said he just returned to work “a few weeks ago.”

The Hudson's development may or may not include the city's tallest building, Gilbert said. 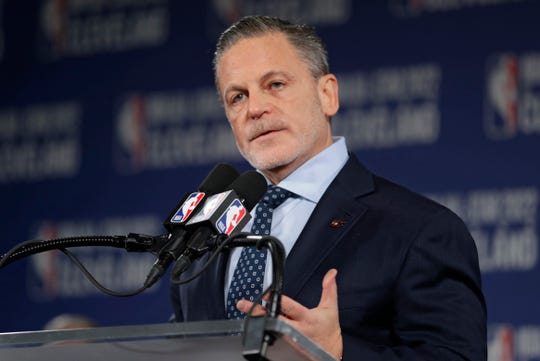 Bedrock has not yet announced the anchor tenant for the mixed-use development on Woodward Avenue. It's in the former block where the Hudson's department store was located.

Gilbert added the planned UM Innovation Center is "starting to heat up."

Meanwhile, Gilbert said he's still on a long path to recovery after his stroke on May 25 and told Crain's he doesn't have any cognitive issues.

“When you have a stroke, here’s the problem with it: Everything is hard. Everything,” Gilbert said. “Like you wake up, getting out of bed is hard, going to the bathroom is hard, sitting down eating at a table is hard. You name it. You don’t get a break. You’re like trapped in your own body.” 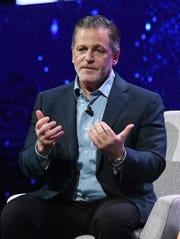 Gilbert owns the NBA’s Cleveland Cavaliers and several other sports teams. In 2010, he moved Quicken Loans headquarters from the suburbs to downtown. He quickly then went on a “skyscraper sale” and entities tied to Gilbert’s Bedrock now own more than 100 downtown properties. Bedrock and its affiliates are now the city's largest employer, with more than 17,000 workers.

Gilbert said he began to wonder why Detroit doesn’t have a stroke rehabilitation center. “I have the fortunate situation of having resources. I start thinking about, imagine people who just don't have any of these resources? What do they do? I mean, insurance does not usually cover most of the … rehab from a stroke. Maybe some of it, but not most of it.”