Restaurant workers (faces blurred) load food into a woman's Grand Prix. They say she drove off without paying. The Detroit News

Detroit— The Detroit police are asking the public for help as they look for a woman who placed a large catering order Feb. 12, and drove off with it without paying. 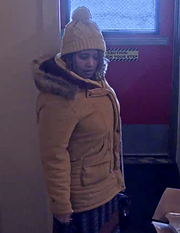 Detroit police sent a photo of a woman they suspected of stealing a catering order. Janice Jones said she believed her employer had paid for the order and it's all a misunderstanding. (Photo: Detroit Police Department)

The day before the crime, the woman called in her order at a restaurant on the 3400 block of Riopelle on Detroit's east side. Police say she left a phone number but told the restaurant she would call back with a credit card number. She never called back.

The next day, two restaurant workers helped a woman put the food in her car. Once her car was loaded up, the woman drove off in the red Grand Prix without paying. The restaurant has tried calling the number the woman left but has yet to reach her, police say.

The woman was wearing a yellow, wool hat and a yellow, waist-length coat with a multi-colored dress and tan boots. Police say the red 2004 Grand Prix had a white license plate with the number EEB3845.

Police urge anyone with information on the crime to call Crime Stoppers at 1-800-SPEAK-UP.