Detroit — Detroit Department of Transportation buses will be back on the road Wednesday after drivers worried about coronavirus stopped the fleet for a day.

Fares will be suspended indefinitely as of 3 a.m. to help alleviate one of the concerns — a back-up of riders at the fare box. 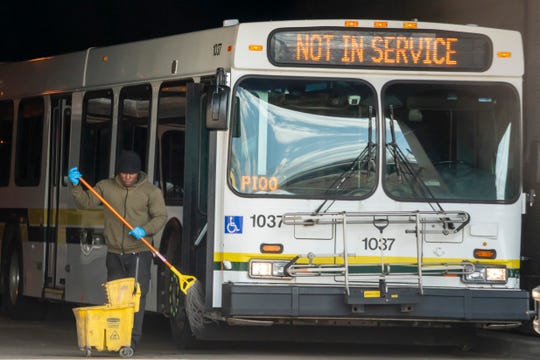 A worker cleans a bus at the Detroit Department of Transportation's Gilbert Terminal, in Detroit, March 17, 2020. (Photo: David Guralnick, The Detroit News)

Mayor Mike Duggan and representatives from three unions made the announcement Tuesday afternoon and outlined a series of other solutions that included more thorough and frequent cleaning of buses, and available restrooms for drivers.

"This is what happens when you work together," Duggan said. "We weren't yelling. We weren't hostile."

He said he was awakened by a 5:30 a.m. phone call and met drivers at a city bus yard an hour later. Glenn Tolbert, president of Amalgamated Transit Union Local 26, said his call came even earlier, at 3 a.m.

DDOT had canceled all bus service and encouraged riders to find alternative means of transportation in the wake of a driver shortage that had only 10% of the buses rolling Tuesday morning.

The city announced the shutdown early Tuesday in a tweet that said, "We apologize for the inconvenience."

Among the problems cited by drivers was a lack of restrooms in the wake of Gov. Gretchen Whitmer's elimination of full service in restaurants. Drivers frequently stop mid-shift to use restaurants' facilities and wash their hands, but many found that option eliminated after the governor's declaration took effect at 3 p.m. Monday.

Duggan thanked Whitmer on Tuesday afternoon for clarifying that police officers, EMTs, postal workers and bus drivers will be permitted inside. Where restaurants have closed, portable toilets with hand sanitizers are to be installed by Thursday.

Other changes include the use of rear doors for passenger entry and exit; a seat kept vacant directly behind each driver; gloves and wipes for drivers, with masks as available on request; and 20 additional staffers to help clean buses more frequently and thoroughly.

Tolbert said drivers had been "trying to muddle through it all week" but Monday's mandated shutdown of restaurants, bars and other venues made it even more challenging. Drivers, he said, have been turned away from using restrooms in eateries and even hospitals.

"Everybody is staying home but we're not and we're still carrying loads and loads of people," said Tolbert, noting at peak hours there are typically about 170 buses running on city streets daily. "It just got to be too much."

UPDATE: Due to the driver shortage, there will be no DDOT bus service today.

We apologize for the inconvenience and will update.

Robert Turner was at the Rosa Parks Transit Center on Cass just before noon after service had been canceled for several hours. 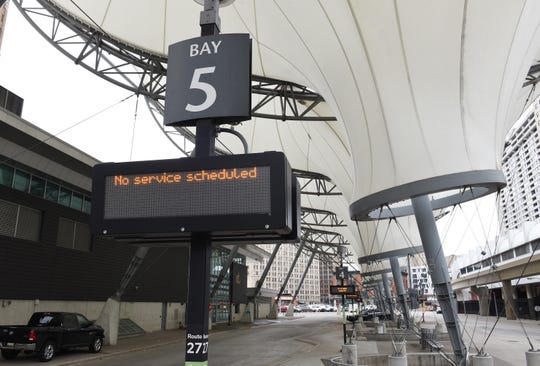 "I'm stranded," said the Detroiter who had just returned from New York. "Better precautions need to be taken. You know as a public servant you still have to be working under any conditions."

Duggan did not estimate how much revenue would be lost by not collecting fares, but noted that ridership has been down as people take virus-related precautions.

A greater concern is the closure of Detroit's three casinos, he said — a loss of $600,000 in tax revenue each day.

"The federal government can print money," he said. "The rest of us have to balance the budget."

Meantime, SMART on Tuesday announced it suspended the exchange of bus fares to minimize hand-to-hand contact between drivers and riders.

"This is a safeguard to protect the health of our employees and the riding public in preventing the spread of the virus," SMART said. "Additionally, we request riders distance themselves from other riders as best they can."

It otherwise intends to continue with normal operations until further notice and is implementing "bus cleaning teams" at key layover locations, according to a news release.

The regional transportation service noted fixed-route bus service reductions are anticipated due to declining ridership. But SMART will provide "ample public notice" before its implemented.

"As a mission-critical public service, it is important to maintain some levels of transit service during this time," the statement says. 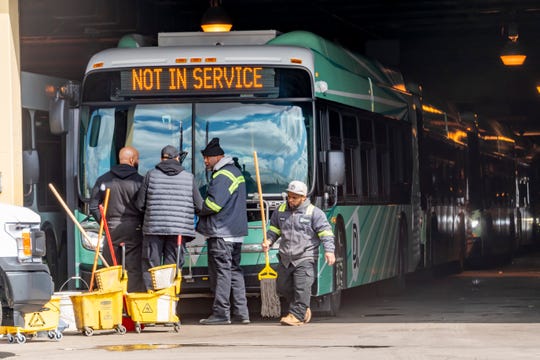 SMART in addition to its nightly bus cleaning will begin as soon as Tuesday with cleaning and sanitizing highly touched areas throughout the bus and driver seating areas.

"SMART is doing everything reasonable to make it safe for our passengers to continue to ride and prevent the spread of the virus," it adds. "SMART is in close coordination with our union and continues to monitor this situation closely."