Detroit — Five Detroit police officers and a civilian contractor have been diagnosed with the COVID-19 virus, while the number of quarantined cops has swelled from 80 to 152 in one day, Detroit police chief James Craig said Friday.

Craig said 130 members have been ordered quarantined, while the other 22 stayed home at the advice of private doctors. The department has about 2,200 members, with 1,800 in the officer ranks. 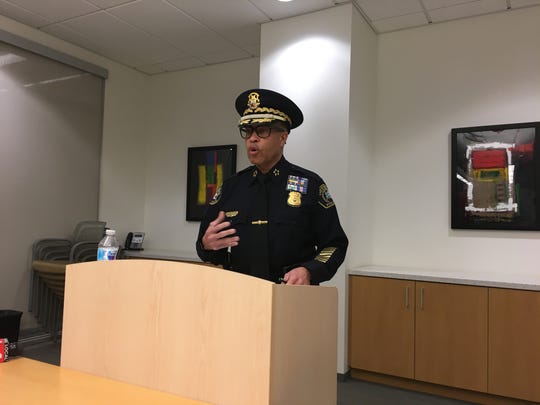 The Detroit News reported Thursday that three officers had been diagnosed with the virus, and that 80 were quarantined. Less than 24 hours later, Craig said the situation is constantly — and rapidly — changing.

"The information I'm giving you will undoubtedly change before this press conference is over," Craig said to a handful of reporters at Public Safety Headquarters.

The chief said the largest outbreak came at the 9th Precinct — which covers one of the most dangerous areas of the city — forcing him to send officers to the precinct as backup.

Craig said the 152 officers out of commission "is not a small number, but right now we’re managing well. If that number were to double, though, I'd be increasingly concerned and would have to go into the next phase of deployment."

"That would mean collapsing certain investigative units," he said. "Every day this changes, and different decisions are made daily. I might have a different posture come Monday, or even tomorrow.

"We have a number of officers who are quarantined," Craig said. "How many more? What impact would that have to a (police) station?"

Craig said the priority will always be to respond to emergency calls for service. "That will not change, although we may change how we do it, and how we deploy it," he said.

Virginia Burroughs, who lives on Detroit's east side, said she's concerned about the number of Detroit officers who are out of commission.

"Right now things are quiet," said Burroughs, 55. "Everyone is staying inside, but I think that'll change, and then things might get worse — especially with fewer police officers out there."

The outbreak in the 9th Precinct happened because of an "event" that was attended by several precinct officers.

"We believe someone in attendance became ill," Craig said. "A number of our members were impacted by that."

Craig said he didn't want to give details about the event to protect people's privacy.

Prior to Friday's press briefing, Craig remotely presided over the graduation ceremony of 32 cadets. The normal ceremony was postponed to maintain social distancing.

"This is historic for you," Craig told Class 2020 C, members of which were assembled in different rooms at Public Safety Headquarters. "You’ll be forever known as a class that started their days facing one of the biggest crises in American history."

Craig also lauded all first responders and medical personnel for working tirelessly during the crisis. He also praised Kyle Vandeventer, director of sales for the Griffin Claw Brewing Co. in Birmingham, who donated vials of hand sanitizer to the police department.

Vandeventer said the business retooled to produce the hand sanitizer. "We're also a distillery, so we had grain spirits at our disposal, which we turned into hand sanitizer," he said.