Marlowe Stoudamire was known for his vision and plans.

Ones that encompassed Detroit — the people who live and work here — and those who forged the city's path through rocky terrain in decades past.

The 43-year-old Detroit consultant and entrepreneur was celebrated for his award-winning Detroit 67 project on the city's uprising for the Detroit Historical Society. Friends and coworkers knew him as a transformational leader, a family man and someone who "embodied Detroit through and through."

Stoudamire is one of 24 individuals in Michigan who have died from complications related to COVID-19, hospital officials and friends say. He died Tuesday. 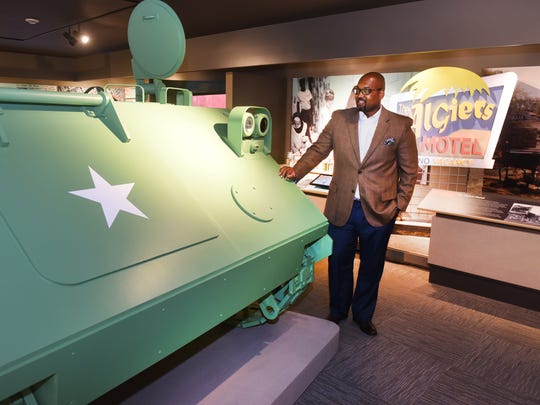 “An amazing man, husband, friend and one of the best dads that I have ever met lost his life to COVID-19 today,” said Riney, who was a close friend and former colleague of Stoudamire's. “My wife and I are heartbroken for this devastating loss. We will continue the fight of this terrible pandemic in his honor.”

Health officials have been spending 16 hours a day over the last 10 days supporting clinical teams and preparing for an expected surge in cases, Riney said Tuesday.

But "today, this becomes deeply personal to me," he said.

Stoudamire, who served as project director of international business strategy at Henry Ford Health System, was a Detroit advocate who "helped forge bonds" across the city, was “tireless in his love and care for others” and could “light up any room with his ideas and strategic thinking," according to Riney.

Besides serving at the helm of the Detroit 67 project, Stoudamire's legacy includes work for the Skillman Foundation and the National Hockey League, according to his website. He was a graduate of Wayne State University, founded the Detroit-centered talent website called Roster Detroit and owned the business consulting boutique Butterfly Effect Detroit.

Stoudamire was a "connector" with a big spirit and a big vision whose entrepreneurial energy was invaluable for many high-profile Detroit nonprofits, said Elana Rugh, president and CEO of the Detroit Historical Society.

He was project director for the Detroit Historical Society’s "Detroit 67: Looking Back to Move Forward," a project that commemorated the 50th anniversary of the Detroit Uprising in 1967. The project won the 2018 National Medal for Museum and Library Science and came second globally at the 2019 Best in Heritage conference in Dubrovnik, Croatia.

The project, which is on its way to becoming a permanent exhibit at the Detroit Historical Museum, was “transformational” for the institution, Rugh said, and Stoudamire became for her a “mentor about equity and race relations.”

Stoudamire recently had signed a contract to be part of the society’s inaugural entrepreneur-in-residence project.

“He was always family first no matter what,” Rugh said. “Being a mom CEO, I always appreciated it. His role as a father and a family man really impacted the way he looked at the world, and he was a friend to everybody.”

Stoudamire also served as chief of staff between 2013 and 2014 at the Skillman Foundation, where he “embodied Detroit through and through,” said Tonya Allen, the foundation’s president and CEO.

“As a lifelong Detroiter, he had a special skill at telling our stories — from Detroit’s 1967 rebellion to those of the amazing women and men who populated Roster Detroit,” Allen said.

“He had a unique ability to bring people together, curating talent and energy to help us all envision a different future together.”

The Detroit Red Wings on Tuesday said they were saddened by Stoudamire's passing and offered condolences to his family. Stoudamire recently worked as a consultant for the Red Wings Foundation.

"Marlowe's indelible imprint will be forever part of the Red Wings Learn, Play, Score program and the thousands of children supported across Detroit," the team said in a statement. "His passion for elevating Detroiters to their full potential was undeniable, living on through the many people and programs he impacted."

Stoudamire was a "light" to everyone he encountered, but he wasn't afraid to challenge others to see things from a "different perspective," Riney said.

Hospital officials are mourning Stoudamire's loss, Riney said, but also increasingly motivated to increase warnings about the far-reaching spread of the disease.

"I would tell the public that diseases like COVID-19 are affecting all segments of the population and that the social distancing that some find a nuisance they should consider an obligation," Riney said.

"We as a society can go on pause for a short period in order to make sure that we break this cycle.”