Detroit — The city reported 249 new confirmed cases of COVID-19 Thursday, but Mayor Mike Duggan said the figure — the fewest recorded in a 24-hour span in days — is due to a backlog in test processing and "has nothing to do with the infection rate going down."

The mayor, during an afternoon news conference, said lab testing is backed up by about 400 tests and cases will rise once it's cleared. Detroit is conducting nearly a third of the overall tests for the virus in Michigan, he said.

"Nobody should look at today's number and say 'Detroit's infections were down to 249, it's dropping.' They are not," Duggan said. "If you are looking at the infection rate, all you are looking at is a report card on the lab capacity. It has absolutely nothing to do with the spread of the virus within this community."

The city noted Thursday that testing at the former Michigan State Fairgrounds does not take place on Sundays, and because there's a four-day turnaround for lab testing results, Thursday's figures reflect a dip in the total number of positive cases.

Detroit's overall number of confirmed cases stands at 6,083. The death toll is 272.

The new cases on Wednesday rose by 333 over Tuesday, and there were 26 new deaths. The city on Thursday attributed 25 more deaths to the virus.

"This virus is still growing. It's growing more slowly than it was a week or so ago," Duggan said. "It's a long way from over." 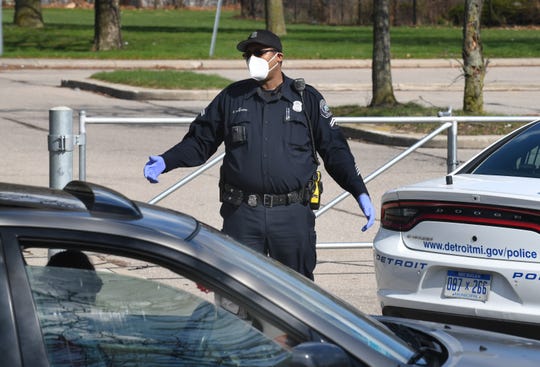 Detroit Neighborhood police officer Dan Robinson tries to explain to a person driving by, why the basketball courts needed to be cleared after noticing a group playing together on April 8, 2020. (Photo: Daniel Mears, The Detroit News)

On Sunday, confirmed cases of the virus in the city shot up by 588 with 38 new deaths. Monday, the increase of positive cases in a 24-hour span was 475 and there were 29 new deaths, and Tuesday figures reflected 469 new cases and 25 additional deaths.

Duggan this week told reporters that the rate of doubling for recorded COVID-19 deaths in the city was "slowing to every five to six days."

The mayor was joined Thursday by U.S. Rep. Brenda Lawrence, D-Southfield, who announced she's helped the city secure $100,000 and a commitment for 10,000 more kits from Hyundai Motors to boost testing capability at the former Michigan State Fairgrounds.

"I need everyone regardless of your race, gender, economic situation — please take this serious," she said. "Everyone be safe, our community needs you."

Hyundai's donation is part of an ongoing program by the automaker to support testing throughout the country. Overall, Hyundai has donated $4 million to help with testing at 21 institutions and provided kits to cover 50,000 tests.

“Our hearts are with the people of Detroit right now and it’s heartbreaking what’s happened and we wish them a quick and speedy recovery,” said Zafar Brooks, director of corporate social responsibility and diversity and inclusion for Hyundai Motor America “We want them to know that Hyundai is a partner that’s standing on their side.”

Duggan said about 1,000 people per day will be tested there beginning Monday.

The city also is among the first in the country to secure rapid testing equipment from Illinois-based Abbott Laboratories. Those kits have allowed for police, fire and other essential workers to be quickly screened for the virus daily.

More: Group calls for Detroit nursing home to do more to protect workers

Duggan said 50% of all the 15-minute test kits will now be directed to nursing homes and homeless individuals.

"We have to protect the folks that can't protect themselves," he said.

So far, 13 homeless individuals in Detroit have confirmed cases of the virus and the infection has killed 11 people in city nursing homes, the mayor said.

Due to the state-imposed shutdown of nonessential businesses, Detroit has suffered losses in its top revenue sources — casino and income tax — which have contributed to a $100 million deficit in the current fiscal year. The mayor has said that the predicament will mean "painful cuts."

Duggan on Wednesday pointed to the city's rainy day fund as a help amid the crisis and said "we will not run a deficit at the end of the day."

Detroit and Wayne County officials have said they are evaluating the potential of hazard pay for front-line workers. The mayor said he's lobbying the federal government for funding and cited efforts by Sen. Gary Peters, who is pushing a proposal to give certain essential workers a pay boost during the pandemic.