Brandon Walker, 26, was arrested a week after pursuit on city's northwest side

A 26-year-old man has been charged with taking his 3-month-old child and leading police on a chase through Detroit last week, authorities announced Wednesday.

Brandon Walker had been at large since April 6, when a woman told officers the father of her child "had taken their 3-month old baby following an argument, and had driven off," investigators reported at the time. "The complaint also advised the officers that the father allegedly demanded money in return for the baby." 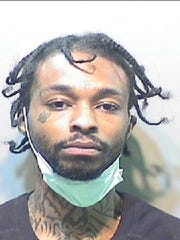 Walker allegedly returned to the 20500 block of James Couzens as officers spoke with the mother but fled when they approached and "disregarded numerous stop signs and traffic control devices" during a chase that was called off to avoid harming the child or others, police said.

Within minutes, the mother retrieved the child unharmed from the vehicle near Seven Mile and Oakfield before Walker left, according to investigators.

Police arrested Walker about 11 a.m. Monday in the 20000 block of Harper, the department said in a statement.

He has since been arraigned on charges of kidnapping, second-degree child abuse and fleeing officers, according to the release.

Other details were not released Wednesday.