Coronavirus crisis exposes ‘many of the fissures we knew existed’

Coronavirus crisis exposes ‘many of the fissures we knew existed’

As authorities work to contain COVID-19, the crisis’ disproportionate impact on African Americans in Metro Detroit and Michigan highlights the need to address underlying issues that affect the demographic, state and local officials said in a panel Thursday.

“It has exposed many of the fissures we knew existed,” Michigan Lt. Gov. Garlin Gilchrist II said.

Gilchrist was part of the virtual discussion that Detroit’s Civil Rights, Inclusion, and Opportunity Department hosted on Facebook Live that focused on race and the coronavirus pandemic.

Participants fielded questions and analyzed factors they believe contributed to the high rate of infection among African Americans in Michigan.

The number of COVID-19 cases in Michigan reached 29,263 Thursday with 2,093 deaths, the state health department reported.

The highest concentration remains in the Metro Detroit counties of Wayne, Oakland and Macomb, where 78% of cases are located and 84% of deaths.

About a third of the cases occurred among African Americans and 41% of deaths.

The data included large percentages of people with unknown race or ethnicity. Race was unknown in 29% of the cases and in 13% of the deaths.

Meanwhile, the first statewide release of mortality by race in Michigan this month found that at least 40% of fatalities were black, a percentage that far exceeds the proportion of African Americans in the state. 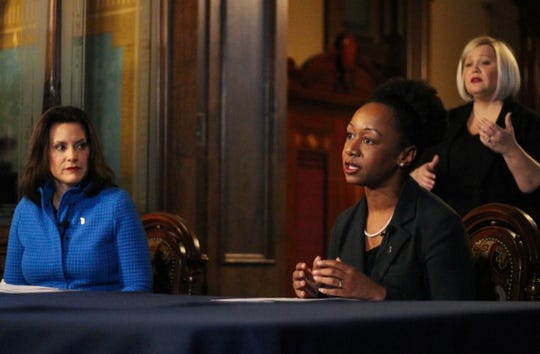 Dr. Joneigh Khaldun, the state's chief medical executive, and Gov. Gretchen Whitmer speak during a press conference on Thursday, March 26, 2020, in Lansing. The two state officials were updating the public on the Michigan's response to COVID-19. (Photo: Governor's office photo)

While figures are not complete, she said, “for there to be that significant of a disparity is quite concerning.”

Detroit has also been among the hardest-hit communities in the country. As of Thursday, the city’s Health Department reported 538 deaths from COVID-19. There have been 7,387 confirmed cases in the city overall. The first positive case was reported in the city just over a month ago.

Anika Goss, executive director at the nonprofit Detroit Future City, said research has found that a higher level of African-Americans in southeast Michigan live in concentrated poverty, or locations where at least 50% of residents are poor.

She said people living in those places might have lower access to jobs or quality health care.  "Our level of concentrated poverty directly contributes to the ability to be able to deal with this virus."

Health officials have said the city's high levels of poverty and pre-existing health conditions make those who acquire the disease more susceptible to the most acute cases of COVID-19.

The panelists also described issues such as lack of transportation hindering access to testing. "Eliminating those barriers to access is important," Khaldun said.

Gilchrist, who chairs the group, said reviewing data "lays the foundation for us to design" intervention efforts. But state officials want to explore ways to boost communities.

Rochelle Riley, director of arts and culture for the city of Detroit. (Photo: Jameela Johnson for The Glam Doctor)

"There are system-level responses we have to have to a community-wide challenge," he said.

The pandemic has also pushed the need for improving everything from education to training physicians, said Rochelle Riley, the city's director of arts and culture.

"We have to do a holistic approach to how we live," she said.