Detroit — The family of 5-year-old Skylar Herbert, Michigan's youngest child to die of COVID-19, will say their final goodbyes next week. 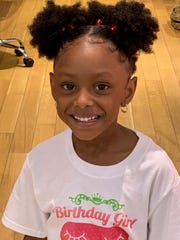 Ebbie Herbert said a public visitation for his daughter, who died Sunday, will be held from 9 a.m. to 9 p.m. Wednesday at James H. Cole Funeral Home, 16100 Schaefer Highway, in Detroit.

A private funeral limited to 10 guests of the family will be held at 11 a.m. Thursday. The service also will be livestreamed.

Skylar's battle with COVID-19 began a month ago, when she first complained about a bad headache.

After Skylar was admitted into Beaumont Hospital Royal Oak on March 29, she developed meningoencephalitis, which caused her brain to swell, her parents said.

She was put on a ventilator on April 4, where she remained for 2 weeks.

Skylar's mother, LaVondria Hebert, said the family decided to remove her from the ventilator "because her improvement had stopped."

"The doctors told us that it was possible she was brain dead and we basically just knew she wasn’t coming back to us," she said.

Skylar’s parents, both first-responders, have said they are not sure how their daughter contracted the virus. The African American family living in the city's northwest side in one of the city's ZIP codes hardest hit by the virus said Skylar had been in the house for weeks and had no prior health issues.

LaVondria Hebert is a Detroit police officer and her husband is a city firefighter.

Detroit Mayor Mike Duggan on Monday called Skylar a "real daughter of the city of Detroit."

Skylar's tragic death, the mayor said, is "a reminder to all of us what's at stake with our commitment to social distancing."

"This family did not deserve to lose their child to this virus," she said Monday. "Nobody does."

On Friday, first-responders for Wayne County, Michigan State Police, Detroit and surrounding cities conducted a Ride for Skylar by driving their official vehicles in Skylar's neighborhood, flashing their lights and blowing horns for Skylar’s family.

“The overwhelming amount of support that we have been shown during this difficult time has really helped,” said Ebbie Herbert. “Thank you, everyone, for all of the love and support.”

Donations to the Skylar Herbert Memorial Fund through Chemical Bank can be made at detroitpublicsafety.org/donate.