All returning city workers will be tested before going back on the job, mayor says

Detroit's coronavirus outbreak appears to be "strongly on the decline," said Mayor Mike Duggan, expressing some cautious optimism Tuesday at the epicenter of the state's hardest-hit city.

The mayor's evaluation comes as he began announcing the first steps of putting the key back into the ignition of the Motor City, outlining how the first wave of city workers will return next week with new safety measures.

There have been 987 deaths in the city from COVID-19 as of Tuesday, an increase of 39 from Monday, Duggan said at a press conference in the Detroit Public Saftey Headquarters to discuss virus cases. But many of those deaths were from several weeks ago and were slow to be counted because of reporting delays, he said.

"Things were worse in this late March, early April period than we realized," Duggan said. "We are strongly on the decline side of this, and it continues to be great success in social distancing." 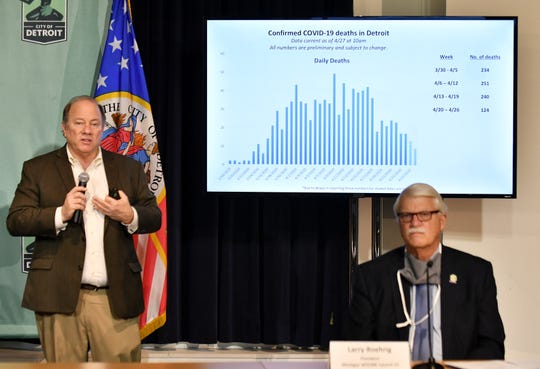 While there are signs of improvement in Detroit, Dr. Teena Chopra, the medical director of Infection Prevention and Hospital Epidemiology at the Detroit Medical Center, noted "that doesn’t mean the virus has gone away."

Chopra warned against relaxing social distancing as the city tries to resume more operations. And there is still too little testing going on statewide, including the city, she warned.

“We have to be very careful when we look at this data and look at the rates,” Chopra said. "Yes, we are happy rates are coming down, but it is no time for celebration. The virus is not going to magically disappear."

Chopra said Michigan is averaging 40 tests per 100,000 people per day when it should be at 150 tests if the state wants to reopen by May 15. The figure represents recent estimates by researchers at Harvard University. She said Detroit's mortality rate, the number deaths divided by total cases, still remains among the highest in the nation.

Duggan said some numbers from the hospitals are encouraging. There are only 16 patients at the field hospital at TCF Center, and the mayor predicted the 1,000-bed temporary facility will be closed soon. City hospitals have 100 empty intensive care unit beds and 500 empty hospital beds, he said.

On April 9, the city reported a high of 49 deaths compared to 21 on Monday. Duggan cautioned daily numbers could go down as the actual date of death is learned. City spokesman John Roach said the city often receives death reports from days or weeks prior and reviewing the data can take time.

Cases are trending downward, and “it is a hopeful time for the city of Detroit,” said Denise Fair, the city's chief public health officer, on Tuesday at the press conference.

There have been 8,823 coronavirus positive tests in the city, officials said Tuesday.

Duggan said the number of nursing home deaths continues to be troubling, but they are slowing as well. Nursing home residents make up nearly 22% of the city's deaths.

He said the lack of testing was a problem in the facilities, and that if they had a rapid-testing system a month or two sooner, the death toll would have been lower. The city recently completed quick-result testing of all the city's 2,030 nursing home residents across all 26 facilities.

And the city is focused on increasing testing, testing at other senior facilities and grocery store workers. Chopra said the city's efforts to test all nursing home patients was a significant step toward controlling the outbreak.

But she urged residents to be extremely cautious.

"You have been socially distancing yourself and staying at home," Chopra said. "It is just that transmissions have gone down and that hospitals are less overwhelmed because you have been staying home."

Michigan's coronavirus death toll reached 3,567 Tuesday as the state added 160 deaths. Tuesday's report was higher than recent days in part because it included 40 older deaths identified by comparing death certificate data to the state's registry of laboratory-confirmed cases. These deaths also might have occurred days or weeks ago.

More robust testing needs to be in place along with contact tracing to better track the exposure to people who have tested positive, council president Brenda Jones said. The council resolution also urged enough personal protection gear and intensive care beds are available before regulations are relaxed.

"Some irresponsible public leaders have been arguing without any significant supporting evidence that Americans should stop or at least drastically limit these successful public health protections in the interest of 'reopening' the economy, sending people back to inherently dangerous and unhealthy spaces for work, school, worship and commerce before the virus is adequately controlled," the resolution reads.

Duggan said he is pivoting his work to focus on medically safe back-to-work policies as the city sees the number of new COVID-19 cases fall.

First to return on Monday will be about 200 workers in the city's General Services Department, who primarily work on cutting grass. They must test negative for the virus and will have their temperature checked before they begin work.

The city will limit employees to three to a vehicle, rather than five, based on suggestions from union officials. The employees also will report to five sites, rather than one, Duggan said.

Union leaders said they were involved in the re-entry plan and praised it.

Larry Roehrig, president of Michigan AFSCME Council 25, called it the "finest example" of cooperative effort in a "long, long time."

Joe Valenti, president of Teamsters Local 214, said his members were eager to get back to work and didn't have complaints with the plan.

Duggan predicted that these precautions still will be in place for employees this fall as the world races to create a vaccine to stem the virus.

"We are going to be dealing with this risk in our community for another year and maybe longer," Duggan said. "People should be getting ready for that."

On Monday, Duggan said a benefactor was supporting an expansion of testing at senior facilities. The city already is offering free testing for essential workers in Detroit. Employers can call (313) 230-0505 to obtain a code to share with their employees to do so. 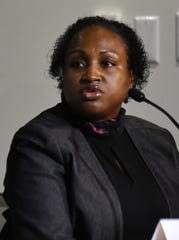 Virus cases among Detroit police officers and Transportation Department employees have been lower than the general public, Duggan said.

"I think it is possible you can be as safe or safer at work than your weekend at home," he said.

In another two to three weeks, Duggan said the city plans to start calling back office personnel. To ensure social distancing, however, groups might rotate between their cubicles and home week to week.

"We are going to be living with COVID-19 in our community for many months, maybe more than a year," Duggan said. "What we have to do is figure out how to live in a way that minimizes it spreading from one person to another."