Officials, the mayor noted, fear there could be a resurgence in the fall and the impact on the city could be even more dire than it has been this spring.

Meanwhile, Police Chief James Craig, who has held the deputy mayor designation since 2016, will continue in that role for public safety and fill in when Duggan is unavailable.

Mallet, who served in executive leadership under former Detroit Mayor Coleman A. Young and the Kwame Kilpatrick administration, previously ran Duggan's first campaign for mayor in 2012. He starts with the city a week from Monday.

"It's my pleasure and it's my honor to come back to the city of Detroit in an executive capacity," Mallett said during a Friday news briefing. "This is just a continuation in what myself and my family has always done." 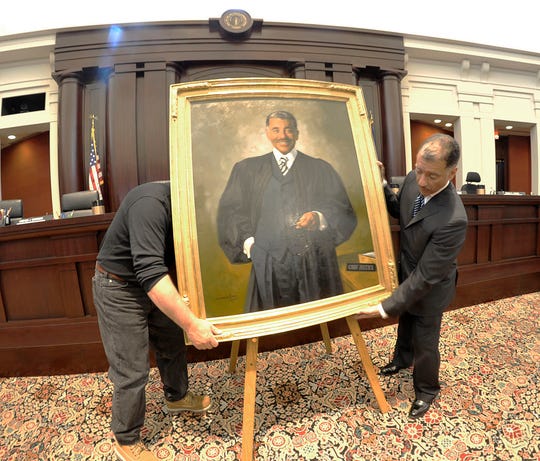 Chief Justice Conrad Mallett, Jr., right, and a court employee move his official portrait after it was presented to the Michigan Supreme Court in April 2012 in the court's chambers in Lansing. (Photo: Dale G. Young, Detroit News)

Mallett previously served as president of Detroit Medical Center's Sinai-Grace Hospital from 2003 to 2011 and was named interim CEO of DMC Huron Valley-Sinai Hospital in March 2017. He was a Michigan Supreme Court justice from 1990 to 1999 and the first African American to serve as Michigan's chief justice.

“This is a pivotal time in our city’s history, and I’m honored that the Mayor has asked me to join the great leadership team he has built,” Mallett said in a statement. “I look forward to working with our group executives, department heads, City Council members and others to navigate these uncertain times as we continue to build a city that provides support and opportunity for all Detroiters.”

The Rev. Horace Sheffield, who also fell ill from COVID-19, joined with Duggan on Friday to detail a series of COVID-19 testing events for community members.

"We're glad to be a part of this ... platform of care," Sheffield said. "Testing is so important."