Detroit — The city's police chief stood with community leaders Thursday to condemn four Minneapolis police officers who were fired for their involvement in the videotaped arrest of a man who died after one of the cops knelt on his neck for several minutes.

George Floyd, 46, died on Memorial Day after officers were investigating him as a suspect in a grocery store forgery case. Police claim Floyd resisted arrest. Video captured one of the officers kneeling on Floyd's neck as he begs, "Please, please, please, I can’t breathe. Please, man." 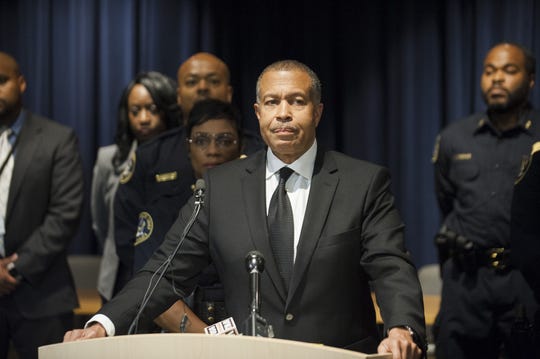 The death of Floyd, who was black, and the actions of the white officers has rekindled a national discussion of racial bias by police and prompted Detroit police chief James Craig to hold a Thursday press conference to reassure the community "we are a constitutional police department."

Craig called Floyd's death a "murder" and said if the incident had happened in Detroit, the officers would be in jail.

While warning against "painting all officers and police departments with a broad brush," Craig added: "We all share in the disappointment of the dishonor these officers bring to our badge."

Joining Craig at the press briefing at Public Safety Headquarters was the Rev. Wendell Anthony, president of the Detroit branch of the NAACP; community organizer Tefari Brent; and Negus Vu of The People’s Action, an advocacy group for African Americans.

Protests in Minneapolis over Floyd's death spiraled into rioting and looting, but Brent said he doesn't envision similar problems in Detroit because Craig has fostered a strong relationship with community groups.

"There's so much conversation about how blue always sticks with blue, but that's not the case here," Brent said. "When I talk to my activist friends across the country, they can't believe the kind of relationship and exchange (with police) that goes on here. I want to lift that up as a model nationally."

The four Minneapolis officers were fired for their roles in Floyd's death, but Craig said Thursday he would have also had them arrested, as he's done several times when his officers broke the law.

"Based on what I saw on that video, there's no question I would have directed an arrest," the chief said. "This was murder."

Craig pointed out two recent cases in which he directed his officers to be arrested: An off-duty female cop who on March 7 allegedly pointed her service pistol at people, and another female officer who allegedly ran a drug house for her incarcerated boyfriend and plotted to have one of her dealers killed.

"I'm aware of the thin blue line," Craig said. "The key as leaders is, we have to lead by example. I take a firm, transparent stance on criminal misconduct. ... Trust is the glue. We mustn't forget that as police officers, we work for the community.

"There's an expectation that in order to build that trust that we're honest, and when we make mistakes or there's an intentional wrong done, we own it, and take responsibility for it."

Craig said within 48 hours of seeing the news of Floyd's death, he put out a teletype memo to his officers reminding them that the choke-hold the Minneapolis officers used on Floyd is banned in Detroit.

"We wanted to reiterate the department's use-of-force policy prohibiting neck restraints," the chief said. "We also wanted to stress the importance of de-escalating and de-emphasizing use of force once the subject is under the officer's control."

"We need more of us who believe in what's right to step up and get involved," Anthony said. "When you put on the badge and that pistol and that uniform, and you have a license to protect and serve, you're stepping up for the community.

"There are bad cops ... there's bad in everybody, but that should not stop the next generation from stepping up and being a part of this," Anthony said. "If we want to fix something, we have to be a part of it."

Craig said he initially did not want to become a police officer before he joined Detroit's police force in 1977, "because of some of the wrongs I was aware of. But my father encouraged me. He said, 'If you want to be a part of the change, you have to be a part of the institution that needs to be changed.'"

Vu said he was "just lost for words" over Floyd's death.

"As a community, we need to collectively stand up, and there needs to be accountability across the board," he said. "We have the chief standing on the right side of this issue, and I stand with him."