Nurses at Ascension St. John made hand prints, poems and more for families of dying patients

A St. Clair Shores woman believes there are angels working in Detroit. But these angels’ white robes are actually scrubs, and their wings are PPE equipment.

Dianne Bioke called the nurses at Ascension St. John Hospital in Detroit "angels on Earth" after she saw the devoted care they gave her mother, Lorraine, who died last month at age 94. While Lorraine had symptoms of COVID-19, she tested negative for the virus, according to her family. 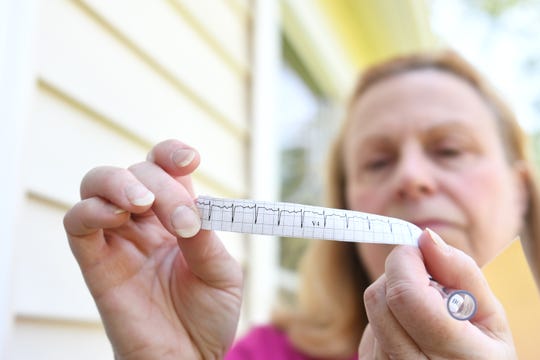 Dianne Bioke of St. Clair Shores, shows a heartbeat rhythm strip on Tuesday, June 2, 2020, of her 94-old mother, Lorraine Bioke, who died at Ascension St. John Hospital. The nurses at the hospital gifted Bioke the strip and other items, which she keeps at her home. (Photo: Max Ortiz, The Detroit News)

Those nurses are a part of an end-of-life team whose goal is to make the final days of dying patients, whether COVID-19 positive or not, as easy as possible for their families.

"They help you through everything," Bioke said. "It was like a substitute family member to be there with me."

When COVID-19 reached its peak in Michigan, hospitals saw an overflow of patients and an underwhelming amount of resources to support those people. In the midst of all of that, a group of nurses dedicated their shifts to creating a more peaceful end of life process.

The team, created in mid-March and led by registered nurse Kara Lambert, provides support in several ways. When a patient is in the final days, the team uses donated iPads so family members who couldn’t visit because of COVID-19 restrictions can see and speak with their loved ones.

When a patient dies, the team prints out the last recorded heartbeat rhythm and seals it in a small glass bottle. They create a painted handprint from the patient and give the canvas and bottle to their family to open after 72 hours. 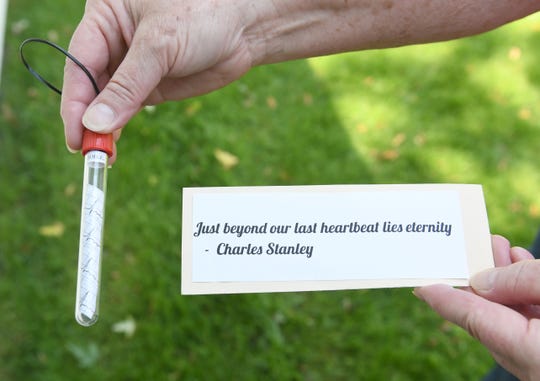 Tough restrictions during the pandemic have prevented loved ones from seeing ill family members in their most desperate times.

Not until Wednesday did the Michigan Department of Health and Human Services on Wednesday loosen rules that banned most hospital visits by non-patients.

“Sometimes a visitor can be just the medicine a hospitalized patient needs to help them through their recovery,” department director Robert Gordon said in a statement.

"It’s really important that our team makes those connections for people so that they don’t feel alone," she said. "You can either give up or you can transform into something better, and I think that’s what we're trying to do."

Bioke, 65, says the nurses made her mother’s 15 days in the hospital easier to bear.

She started out making consistent Facetime calls with her mother at the hospital, but as Lorraine became more sick and incoherent the video chats became harder for Bioke to do.

So Fox promised Bioke they would call her on the phone instead, so she wouldn’t have to see her mother lying in a hospital bed. They called every day, Bioke said.

Fox and other nurses would hold Lorraine’s hand while her daughter spoke to her, so she’d feel as if Bioke was there. They prayed with Lorraine, who was very religious, and read her daily devotionals to her.

"It’s a very moving gift ... it’s a touching tribute because they know how tough it is when you can’t be there with the person," Bioke said.

Fox called Bioke on the night of May 19 to inform her that Lorraine had died. She presented Bioke with the heart beat rhythm and the handprint as well as a written poem.

Bioke then told Fox she was a part of her pack now and that she couldn’t let Fox go.

"They’ve gone above and beyond... those women, and they still said I could call any time now if I wanted to," Bioke said.

For Fox, many of the patients she aided made her feel as if they were her own family. She’s cried with patients’ relatives and follows up with them after their loved one has died.

"I just feel like this has given me so much hope and closure that even when stuff is terrible and the world seems like it’s falling apart, like, humanity can step up and really create special and beautiful moments," Fox said.