“The district having its own police department and spending … on police and security is not within our values,” Jessica Mason, a student at Benjamin Carson High School of Science and Medicine, said during a rally outside district headquarters.

“... Black students like me and my peers in DPSCD deserve better, and we are here to say: there will be no justice, no peace until we get rid of the school police.” 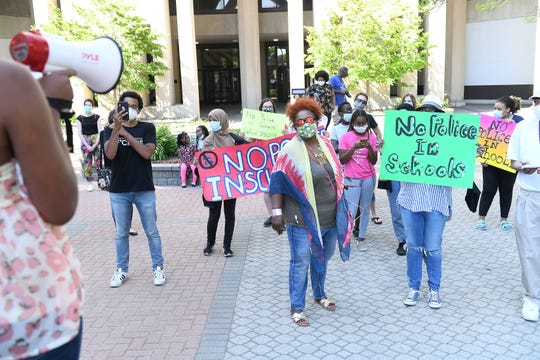 Attendees listen while Jessica Mason, 15, a student at Benjamin Carson High School of Science and Medicine speaks at the press conference. Some Detroit Public Schools Community District students and former students host a press conference to call on DPSCD to defund their school police in front of the New Center One Building in Detroit on June 15, 2020. (Photo: Robin Buckson, The Detroit News)

The demonstration was led by 482Forward, a community-based group focused on education, and came as the district school board is scheduled Tuesday to review its budget for the 2021 fiscal year.

Since Floyd died during an encounter with a white police officer in Minneapolis on May 25, protesters in Detroit and across the country have pursued a defunding movement, which includes options such as shifting policing resources to other community services.

Linking that push to conditions in city schools, participants in Monday's event urged district officials to reallocate dollars to add resources such as guidance counselors and nurses.

“Do you want more money to be spent on police and security guards and metal detectors?” Davonte Johnson, an activist who graduated from East English Village Preparatory Academy last year, asked the demonstrators.

The nearly 20 attendees gathered in front of him shouted: “No!”

District representatives did not respond to a request for comment Monday evening. 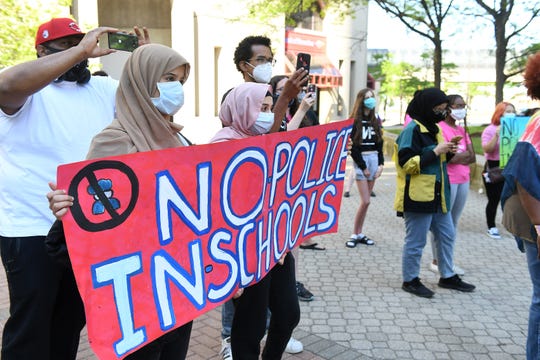 From left, Laila Nasher and Tuhfa Kasem, graduates of DPSCD schools, hold a sign at the press conference. Some Detroit Public Schools Community District students and former students host a press conference to call on DPSCD to defund their school police in front of the New Center One Building in Detroit on June 15, 2020. (Photo: Robin Buckson, The Detroit News)

Headquartered in a multi-million-dollar command center that opened in 2011, the district police department includes an executive command team, officers and investigators “whose mission is to provide a safe and secure environment for students and staff, conducive for teaching and learning,” according to its website.

Several demonstrators questioned the need for a large police presence, suggesting that extensive monitoring of a mostly minority student population extends an unfair system that fails to guarantee greater safety.

“I refuse to continue to let this happen when I see my old peers and many students from white schools being treated like human beings while classmates of mine go through metal detectors and backpack searches every day like criminals,” said Michelle Guerrero, a recent Cass Technical High School graduate.

Besides redistributing funds, the demonstrators also want the district to convene a committee including parents, students and educators focused on safety.

“We know this is not going to be a simple solution, that it’s a complicated issue,” said Angie Reyes, who leads the Detroit Hispanic Development Corporation and works with 482Forward. “But that’s why we need everybody’s voices and perspectives at the table, so that we can come up with solutions to make the schools not less safe, more safe.”