It’s become a case of bewildering circumstances. A bank robber gets into a heavy gunfight and is killed. But nearly a day later, his identity remains a mystery and no relatives have come forward. And his alleged accomplice, possibly injured, remains on the lam. 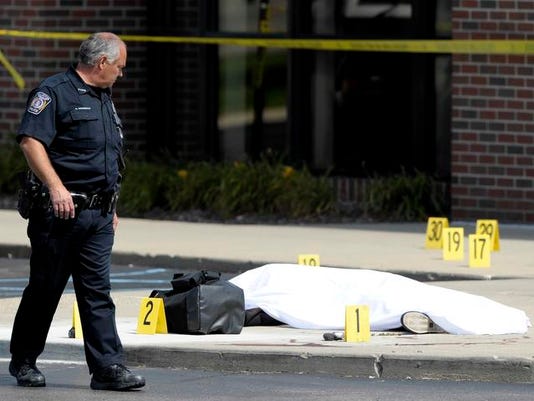 A police officer walks past the body during his investigation Thursday following an attempted robbery at the Bank of America at 37370 S. Gratiot in Clinton Township. (Photo: Todd McInturf , The Detroit News )Buy Photo

A bank robber gets into a heavy gunfight Thursday and is killed. But nearly a day later, his identity remains a mystery and no relatives have come forward. And his alleged accomplice, possibly injured, remains on the lam.

The man, authorities say, who is an approximately 20-year-old black man, was shot by an armored vehicle guard after he took a bag of money at the Bank of America branch in Clinton Township near Gratiot and 16 Mile.

He was scheduled to have an autopsy Friday. His fingerprints will be sent to the Michigan State Police crime lab in Lansing.

If that fails, says Capt. Richard Maierle of the Clinton Township police, the authorities would go to plan B. But no one knows what that would be.

“We don’t know who he is,” Maierle said. “And nobody’s called. We’ve got like zilch for tips. I thought we’d get a phone call by now. I’m surprised at this point that no one has called us missing a loved one.”

The unknown man, whom Maierle said weighs about 150 pounds, was wearing “soft body armor” that covered his torso and a hoodie. One of the bullets fired from the dead suspect went in through the window of the bank, but no one inside was injured, he said.

Around 12:56 p.m. Thursday, the Garda armored car security guard known in bank parlance as the messenger was entering the bank at 37370 Gratiot when he was accosted by a robber, said Police Chief Fred Posavetz.

“They got into a gunbattle,” Posavetz said, adding that the suspect was “shot several times by the armored car officer.”

In the exchange of gunfire, the guard also shot a getaway driver who was sitting nearby in a stolen minivan, Posavetz said. Police found the silver Town & Country unoccupied on a side street just north of the bank. A bullet hole was found in the passenger front door and blood was on the driver’s seat and steering wheel.

“Witnesses said the passenger side window was shot as he was making a getaway,” the chief said.

Ladria Murray, 31, of Roseville was one of about 40 people in the Bank of America when the shots began and described a scene of chaos and how “everybody in the bank just hit the floor.”

“We just tried to find an open spot so we could get down,” Murray said. “We heard shooting for maybe a good eight seconds. It was a lot of shooting. Then you heard screams and then everybody was just trying to get to a safe spot.”

She was waiting for police to retrieve her black Chrysler, which was parked next to the body on the sidewalk.

The man was dressed in all black with a mask, gloves, bulletproof vest and combat pants.

Andrea and Jeffrey Hernandez were on their way with their children to a doctor’s appointment when they heard gunshots.

They turned into the parking lot after witnessing the Garda armored truck guard exchanging gunfire with the suspect.

“There was just like a lot of gunfire,” said Andrea, 34, of Roseville.

Both Andrea and her husband approached the masked suspect after he fell to the ground.

Being in the health care field, Andrea wanted to try to help him, but the armored car guards who locked themselves in the truck beckoned her off. Then police arrived. A leather bag of money sat on the sidewalk beside the gunman, the Hernandezes said.

“When we got here, we just saw the suspect,” she said.

“The gun was far enough away from him that he couldn't grab it as well as the bag of money. When we got to him, he was laying there twitching.”

Jeffrey Hernandez asked him if he was OK and there was no response.

“They said get away from him,” he said of the Macomb County deputy sheriffs who arrived seconds later.