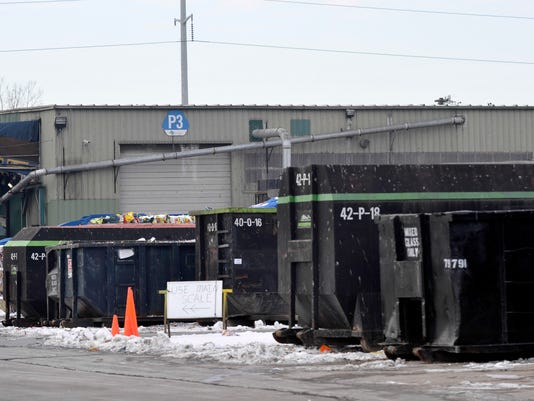 The body of a dead infant boy was found by workers sorting recycled waste at the RE Community recycling center in Roseville.(Photo: Todd McInturf / The Detroit News)Buy Photo

Roseville — Police said the body of a newborn boy found at a recycling center is not the missing child of an Okemos woman, who has been charged with murder in the 2013 death of her baby girl.

Roseville and Meridian Township detectives were collaborating to ascertain if the baby could be Mitin’s missing child.

“This revelation obviously changes the scope of the investigations for both the Meridian Township and Roseville police departments,” Berlin said in a statement.

Berlin said Roseville police must now find out who “so heinously dumped” the baby “into a dumpster.”

The body was that of a white boy estimated to be 1-3 days old.

Workers at the ReCommunity Recycling center in the 30800 block of Groesbeck were sorting items about 11 p.m. Wednesday when a bundle came down the sorting line. When center workers opened it, they found the body of the newborn.

“We are saddened by the events that happened at our Roseville, Michigan, facility, and we are cooperating with the authorities as they conduct their investigation,” Will Herzog, Re Community spokesman, said in a statement Friday. “At this time we believe that all questions are best directed to the investigating authorities.”

According to a 2011 press release on ReCommunity Recycling’s website, the Charlotte, N.C.-based company bought two Great Lakes Recycling facilities in Huron Township and Roseville for an undisclosed amount.

The company works with 32 communities in 14 states. It operates five Michigan recycling and recovery facilities — in Roseville, Ann Arbor, Detroit, Saginaw and New Boston — for household and business waste.

Meridian Township police are working to locate a baby in an Ingham County case in which Mitin, who has been charged with murder in the 2013 death of her baby girl, gave birth to a boy last month whose whereabouts are unknown, authorities said.

Ingham County Assistant Prosecutor Debra Rousseau said Mitin of Okemos on Tuesday told a family court judge she “could not recall” where the baby boy is. On Wednesday, Rousseau told a circuit judge the remark was “startling.”

“We believe she is a danger to the community,” Rousseau said.

Circuit Judge Jim Jamo ordered Mitin held without bond at the Ingham County Jail. She had been free on $5,000 bond while she awaited trial in the 2013 death.

Mitin’s lawyer, Frank Reynolds, said he has “serious concerns about her psychological well-being” after the remarks about the newborn. Jamo has granted a request by Reynolds for competency tests.

Mitin, who had been living with her parents in the Lansing area, was examined at a doctor’s office in mid-December, and it was determined she was 35 weeks pregnant, Rousseau said. An examination Tuesday showed she had given birth about three weeks ago.

Mitin was charged last year in the Dec. 26, 2013, death of her daughter. According to testimony in the case, she concealed the pregnancy, gave birth in a bathroom and put the infant face down in a wastebasket. The umbilical cord and placenta were still attached.

Mitin told police that after giving birth, the baby cried but then stopped breathing.

Anyone with information in either case is urged to contact the Roseville Police Department at (586) 447-4483.