Man, 76, in custody after shooting

Man, 76, in custody after shooting 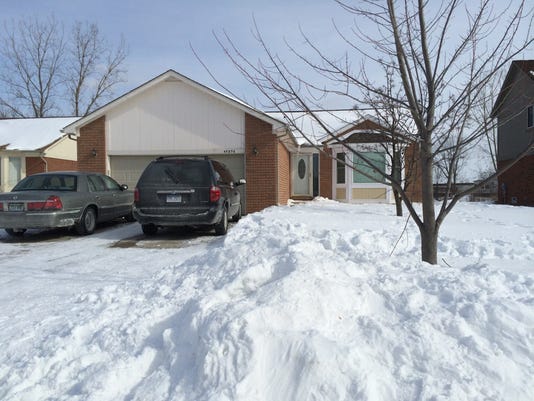 A Detroit man, 31, was fatally shot around 9 a.m. at his girlfriend’s home on the 45800 block of Lone Pine Drive, in an area north of M-59 and west of Interstate 94, said Sheriff Anthony Wickersham.(Photo: Detroit News / Holly Fournier)

Macomb Township — A Detroit man was fatally shot Monday morning by his girlfriend's grandfather, according to the Macomb County Sheriff.

The victim, 31, was shot around 9 a.m. at his girlfriend's home on the 45800 block of Lone Pine Drive, north of M-59 and west of Interstate 94, said Sheriff Anthony Wickersham.

The alleged shooter, the 76-year-old grandfather of the victim's girlfriend, was standing "in close proximity" to the body when police arrived and was taken into custody without incident, Wickersham said.

"He did not resist; he was standing outside," he said. "The gun was on the ground when deputies arrived."

Family inside the home heard multiple gunshots Monday morning and called 911, Wickersham said. Arriving deputies found the victim laying in the snow in front of the home. He had numerous gunshot wounds and was pronounced dead at the scene.

Wickersham said the victim's girlfriend lives with her grandparents at the home, along with three children she shared with the victim.

The children, ages 11 and younger, were in the home at the time of the shooting, along with their mother and her grandmother. No one witnessed the shooting, Wickersham said.

Prior to the shooting, the victim arrived at the home Monday to pick up one of the children for visitation.

"Upon his arrival, the 76-year-old male went and met him outside," Wickersham said. "We do know at the time (the older man) was armed with a handgun."

Shortly after the grandfather went outside, family inside the home heard multiple gunshots.

"The grandmother and the granddaughter called 911," Wickersham said.

Jeanne Gittler said she was inside her son's garage down the street when she heard three gunshots.

"I just went right back in the house because I just thought it was a car or a truck backfiring," said Gittler, who was at her son's home to watch her grandchildren on Monday. "With this weather being so cold I just assumed that's what it was."

Gittler, 55, said she realized what happened when she left the home later in the morning to take her grandchildren to see a movie.

"My heart goes out," she said. "There's kids involved and it's just not right."

The suspect remains in custody Monday and is not cooperating with police, Wickersham said.

Police are investigating to determine a motive, including whether there was a confrontation prior to the shooting.

Wickersham said police also do not know if there was a history of conflict between the couple.

"At this point we're still talking to everybody so we don't have that information," he said. "Those types of things might give us a mindset as to what went on."

The victim, 31, was shot around 9 a.m. at his girlfriend’s home on the 45800 block of Lone Pine Drive, in an area north of M-59 and west of Interstate 94, said Sheriff Anthony Wickersham. (Photo: Detroit News / Holly Fournier)

Neighbor Ermina Latifovic, 18, said the suspect had expressed concern over a custody issue involving the children.

"He would tell us how much he loved the kids and how didn't want them taken from him," said Latifovic, who lives next door.

Latifovic called her neighbors "the sweetest people" who were involved in the community, from loaning tools to attending her graduation party last summer.

"This is nothing that we would expect from him," she said. "It's scary to know it could be anyone."

Police plan to present their investigation tomorrow to the Macomb County Prosecutor's Office, which will determine charges against the suspect.