Woman carjacked in Roseville by man with Uzi

The incident occurred at about 5:40 a.m. Monday as the victim was leaving her home in the 26000 block of Janet Court

Woman carjacked in Roseville by man with Uzi

Roseville — A 19-year-old Detroit man accused of trying to carjack a Roseville woman Monday morning while armed with an Uzi-style gun was arraigned Monday afternoon.

He's being held in the Macomb County jail on $1 million bond.

Sanders is also wanted in Detroit for carrying a concealed weapon, police said.

According to the Roseville Police Department, the incident occurred about 5:40 a.m. as the victim was leaving her home in the 26000 block of Janet Court.

The woman, 37, was going out to her vehicle which had been started by remote control when Sanders grabbed her from behind, placing a hand over her mouth while holding an M-11 9 mm in his other hand, Police Chief James Berlin said.

The attacker warned her not to yell and then demanded her purse and car keys. She complied. While he fumbled with her purse, she managed to squirm away and began to scream.

He jumped into the car and tried to drive away, but the car's engine cut off automatically because the key was not in the ignition, Berlin said in a statement.

He then ran off, with the victim's husband, who had heard his wife scream, giving chase on foot.

At one point, the attacker turned and pointed the gun at the husband, who immediately stopped the chase, Berlin said.

Police soon spotted the suspect near Gratiot and 10 Mile, where they arrested Sanders without incident. Officers recovered a fully loaded submachine gun. Sanders returns to court April 29 for a preliminary exam. 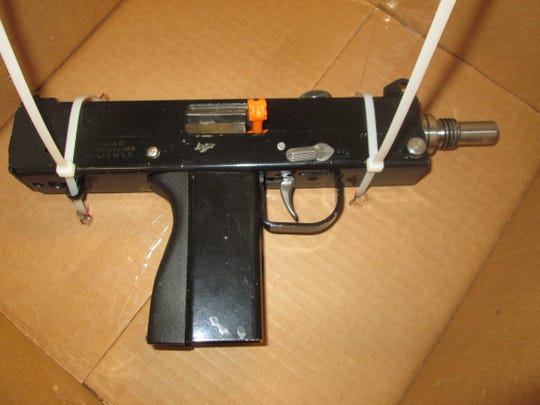