Edward Williams, son Eddie and wife Deanna are among thousands of blacks to move to Eastpointe since 2000. A rough start that included a home burglary and unfriendly neighbors has seen improvement, he said.(Photo: Steve Perez / The Detroit News)Buy Photo

Eastpointe — In 2008, Edward Williams believed moving his family from Detroit to Eastpointe was ideal.

Williams found a house for a good price, the neighborhoods appeared to be safe and the city’s business sector was growing, he said.

“It seemed like a thriving town,” said Williams, a father of two.

He joined a wave of thousands of other African-American families that settled in Eastpointe from 2000-14, sparking a 734 percent increase in the black population of the Macomb County suburb on Detroit’s northern border.

The Census figures also show spikes of black residents in other suburban Detroit communities, but there’s been a particularly notable increase in Eastpointe and Harper Woods. Harper Woods saw a 383 percent increase in 14 years. Warren saw a 459 percent jump in its black population.

Eastpointe officials say they have welcomed the wave of diversity, which includes several new black-owned businesses and growing black churches.

Neighborhoods that were all white in the 1990s are now mixed with black families, many of whom migrated from Detroit in search of affordable property and quality city services.

“This is not necessarily the beginning of integration,” said Kurt Metzger, a demographer and director emeritus of Data Driven Detroit. “It’s just been whites leaving and blacks moving in.”

The state placed a CEO at four schools — Bellview and Pleasantview elementaries, Kelly Middle School and East Detroit High School — in the district to help turn around academics.

“It’s a problem that needs to be dealt with,” Metzger said.

Eastpointe City Manager Steve Duchane said the town prides itself on having appeal to families.

“The reason that (Eastpointe) is popular is because we sweep the streets, pick up the trash, the streetlights are on, the police come when you need them, and if you need a paramedic, they will be there in a few minutes,” Duchane said. “We have a good, well-running operation where you can get a good investment for your house and your children can live and play and grow up safely.”

Duchane said the town also has been attractive because street crime is minimal. The main concern residents have is property crime, including vandalism or larceny, he said.

Metzger said many black families who move to Eastpointe are coming from neighborhoods in northeast Detroit that are saturated with crime and blight.

“So you had an area where people were already subject to all the negative and were looking for opportunity to move somewhere that they saw as safer areas, with more walkable streets, better schools,” Metzger said.

But history shows Eastpointe hasn’t always been favorable to Detroit, which is 79 percent black.

The city voted to change its name from East Detroit to Eastpointe in 1992. Residents said at the time they wanted to distance themselves from the word ‘Detroit’ because it was hurting the city's image and property values.

There were also attempts to change the school district’s name, but school officials opted to keep “East Detroit.”

East Detroit opted to become a school of choice district in 2009, which has attracted a lot of black students from Detroit, particularly at the high school level, Superintendent Ryan McLeod said.

McLeod said there are approximately 400 school of choice students in the East Detroit district.

Mayor Susanne Pixley, who like Duchane is white, said she has worked to make black families feel welcome in the community. She attends events, meets with community leaders and collaborates with Police and Community for Equality — a nonprofit that focuses on racial unity and police-community relations in Eastpointe.

Pixley said as the town becomes more diverse, it could benefit from having black citizens in leadership. All elected officials in Eastpointe are white and the city recently hired its first black police officer — Marcel Prude — in several years.

“We had a few that ran (for office) but didn’t win,” Pixley said.

Edward Williams, 47, talks about his experience living in Eastpointe with his family since 2008. The city has seen a 34 percent increase in its black population in the past 16 years, according to U.S. Census data.

Moving into a mostly white community, and county, has come with its challenges for black residents.

Williams said his family had a rough start their first year in Eastpointe. Some of their neighbors weren’t friendly to them, their home was burglarized and a letter was circulating in town that called for black families to leave the city and “go back across Eight Mile,” Williams said.

“I was a little bit on edge at first,” he said.

“But (the neighborhood has) gotten a little better,” Williams said, adding his neighbors will usually speak with his family when they’re out.

Williams, who runs a telecommunications firm, said he hopes to run for Eastpointe City Council one day and be a voice for the black community.

Earlier this year, black leaders in Macomb County called for county officials to hire more minorities in government jobs. The group, Black Opportunity Matters Coalition, noted African-Americans make up 5.8 percent of the county government’s work force and, of that number, less than 1 percent, or 20 out of 2,164, earn more than $55,000.

The coalition said a lack of jobs for African-Americans limits home ownership, income and educational attainment.

And diversifying the police force is challenging because “there is a very deep shortage of African-Americans interested in applying for law enforcement beyond the city of Detroit,” he said.

“The community and police officers probably feel that there is more interaction and it’s more comfortable for everyone to have people that look like them,” Duchane said. “As a matter of business logic and public administration, we would like to encourage and see that.”

Pixley said she personally will go out in the community, speak with black residents and suggest they run for office.

Pastor James Friedman, president of PACE, said the nonprofit holds meetings every month with local leaders, residents and police to discuss ways to improve the community.

“I think we have done a pretty good job here from a collaboration standpoint of people from different faces and places, trying to keep our city as positive as possible,” Friedman said. “We want our city to stay a wonderful city on our watch.” 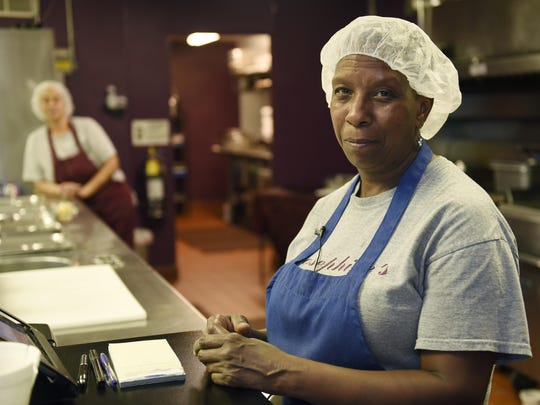 Doris King, above, opened Josephine’s soul food restaurant in 2013 because she believed it could serve Eastpointe’s growing diversity. “I think the security is what actually attracts people,” she said. (Photo: Photos by Clarence Tabb Jr. / Detroit News)

Linda Weishaupt, director of the Eastpointe-Roseville Chamber Commerce, said the chamber does not track the number of businesses owned by minorities but there has been a spike in black merchants. They have opened hair salons, boutiques, law firms, insurance agencies and restaurants in recent years, she said.

She knew the community was becoming more diverse and believed her business could benefit from it. It’s also one of few soul food restaurants in the area.

“People who have moved into the neighborhoods here ... they become regular customers,” King said. “It’s peaceful and quiet, you don’t hear of a lot going on. I think the security is what actually attracts people.”

Borders: Roughly between Eight Mile on the south, 10 Mile on the north, Interstate 94 on the east and Hayes on the west.