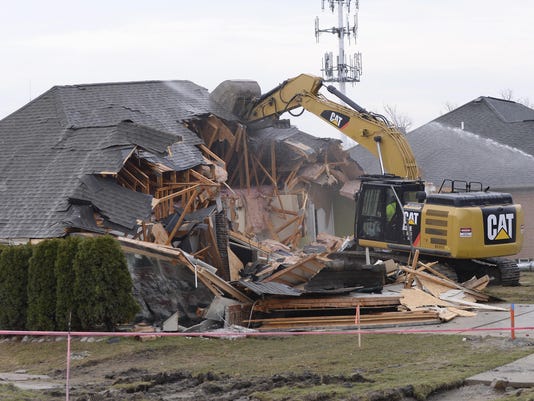 The home at 34980 Eberlein Drive in Fraser is demolished March 24, 2017. The work comes in the wake of a drain interceptor collapse on Christmas Eve that caused a large sinkhole.(Photo: Clarence Tabb Jr. / The Detroit News)Buy Photo

Fraser — The first of three homes condemned in a massive sinkhole on 15 Mile in Fraser was demolished early Friday — exactly three months after the drain interceptor that caused the damage collapsed.

Officials say the demolition kicks off the first phase of a construction project to repair the interceptor. The $32.7 million repair project, which was awarded to Dan’s Excavating, is expected to conclude by mid-September.

Macomb County Public Works Commissioner Candice Miller said the county wants to stabilize the area to avoid the recurrence of an interceptor collapse. That could mean a second phase of preventative work is required but county officials have not made a final decision, she said.

The Christmas Eve collapse marked the third time a sinkhole emerged near the intersection of 15 Mile and Eberline, Miller said.

“I will tell you one thing, 10 years from now, my successor is not going to be standing here in a sinkhole on 15 Mile Road,” Miller said.

Miller said the cost to condemn and demolish the homes was roughly $1 million.

The county is compensating the homeowners for their losses, Miller said. The family in the home that was demolished Friday is set to receive more than $300,000, she said.

Workers spent Friday morning razing the house on Eberline and 15 Mile with a bulldozer and dumping debris into a truck. A second house across the street will be demolished in the coming days.

Miller said the county has not decided whether the third house needs to come down.

“This is a huge step in progress today,” Nichols said. “Once this comes down, it begins the healing portion for the residents and the city of Fraser.”

The first phase of repairs will also include repaving 15 Mile and removing old piping, said Dan Heaton, spokesman for the Macomb County Office of Public Works.

The first phase, which is expected to cost about $75 million, will be completed by Thanksgiving, Heaton said.

The second phase of preventative work on the interceptor could cost an additional $75 million.

The collapse forced the evacuation of 22 homes. The occupants of 19 of the homes have since been allowed to return; three other homes have been condemned.

Last month, the county board of commissioners approved a $20 million loan from the county’s delinquent tax revolving account and general fund to cover the costs of a long-term $10 million bypass, claims from residents affected by the interceptor collapse and other expenses.

On Wednesday, the state House approved a supplemental appropriation that allots $3 million in state money to repair the sinkhole. The bill still needs to be approved by the Senate before Gov. Rick Snyder can sign off on it.