Joseph Dedvukaj built a family mausoleum and is suing Resurrection Cemetery over fees for the statues he added.(Photo: Clarence Tabb Jr. / The Detroit News)Buy Photo

Clinton Township — A man wants $10 million from a local cemetery he says tried to force him to build a $900,000 mausoleum and then threatened to remove valuable decorations, including a life-size Mother Teresa statue, according to a federal court lawsuit.

The mausoleum, as initially designed, would have spanned 24 burial plots and cost so much money it would have been more expensive than all but four homes on the market in Clinton Township.

Dedvukaj wants an order declaring that the cemetery staff’s threats to remove the bronze Mother Teresa statue and a granite sculpture of the Virgin Mary and Jesus Christ violate constitutional protections guaranteeing freedom of religion and expression.

The lawsuit details the dark side of the luxury mausoleum trend popular among wealthy baby boomers, a trend coinciding with a revived real-estate market in Metro Detroit, where homes for the living are setting record prices. 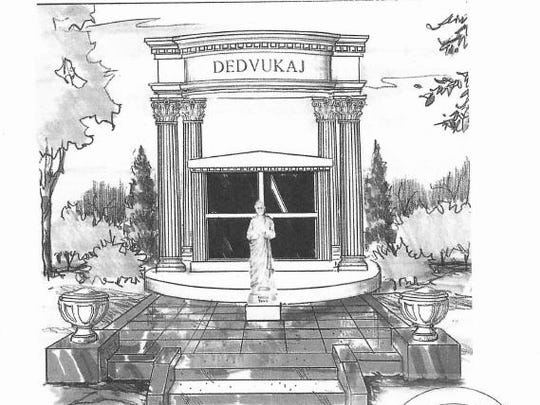 The initial design called for an $858,000 mausoleum featuring a statue of Mother Teresa. The finished mausoleum is considerably different. (Photo: U.S. District Court)

The Dedvukaj “family estate” mausoleum is comparatively modest and lacking some of the more novel amenities featured in luxury tombs nationwide, including electricity, transparent domes and man caves.

“For people of significant means, that purchase is not unusual,” said Ron Browning, founder and chief executive of Forever Legacy, a Texas-based mausoleum builder. “For those people, the idea of having an eternal building where yourself, significant other and family can rest seems fairly common.”

Dedvukaj is Albanian and Roman Catholic and wanted to build a private family mausoleum before his parents died. The Mother Teresa and granite sculptures were an essential design element and would help protect the Roman Catholic rights and privileges of the dead and grieving relatives, Dedvukaj wrote in the court filing.

He contacted Resurrection Cemetery, a nearly 300-acre graveyard that is the final resting place of the late Congressman Harold Ryan and actor Frank Nastasi, who voiced the dog “White Fang” on the TV show “Lunch with Soupy.”

Cemetery officials told Dedvukaj “in the private family estate section there is no limit to what you can do,” according to the lawsuit.

Cemetery officials had their mausoleum vendor design a tomb that included the Mother Teresa sculpture, a patio and towering columns, the lawsuit alleges. Cemetery staff said he could add the granite sculpture of the Virgin Mary and Jesus Christ and showed him a vendor’s brochure, Dedvukaj alleges.

The price “shocked” Dedvukaj, according to the lawsuit.

He told cemetery staff that an outside vendor could build a less expensive mausoleum.

The cemetery staff insisted on using Resurrection’s own vendor for the tomb, citing the company’s “perpetual guarantee,” according to the lawsuit.

Dedvukaj eventually agreed to use the cemetery’s vendor to build the mausoleum.

He asked cemetery officials for assurance that he could add the bronze Mother Teresa sculpture and granite sculpture of the Virgin Mary and Jesus Christ, according to the lawsuit.

The staff insisted sculptures and statues were allowed “as long as the merchandise was not offensive to the Catholic faith,” Dedvukaj alleges.

Before finalizing the purchase, Dedvukaj “expressed concerns about the prices for the merchandise and protested the fact that (Resurrection Cemetery’s) vendors had to be used since other non-Resurrection vendors were substantially less,” according to the lawsuit.

Despite his concerns, Dedvukaj signed the paperwork, saying he was “vulnerable” and had “serious concerns that his father could pass away at any moment.”

Dedvukaj did not build the mausoleum as originally designed, instead settling on a dramatically downsized tomb. It is unclear how much he spent on the mausoleum.

Last year, the patio and foundation were installed. Dedvukaj hired an outside company to build the statue and sculpture.

A cemetery official told Dedvukaj he needed to pay 15 percent of the value of the decorations, according to the lawsuit. Dedvukaj protested, saying the fee was illegal.

The cemetery association wants the lawsuit dismissed, saying most of the complaint is based on state law claims, not federal law.

“Notably, the complaint does not allege that (Dedvukaj) was never informed of this fee requirement before he purchased the land,” the association’s lawyer Gregory Meihn wrote in a response to the lawsuit. “Despite the length of the complaint and numerous claims, (Dedvukaj) has not provided a sufficient factual basis to show plausibility for any of his claims.”

It is not unusual for tension to exist between cemetery officials and relatives who want to personalize gravesites, Edquist said.

“Everybody wants something unique and, sometimes, it doesn’t fit with the cemetery,” he said.

Edquist, who runs a cemetery in Niles, in the southwest corner of Michigan, draws the line at gravesites customized with curse words, though he wouldn’t specify which ones.

“Most of them,” he said, “I wouldn’t repeat in front of people.”

The only private mausoleums for sale at Edquist’s cemetery are small and less expensive than the one Dedvukaj built.

“Buyers think ‘I can do whatever I want,’ ” Edquist added, “but the cemetery still owns the property.”