A Fraser company fire caused the Clinton Township oil spill on Aug. 4. Officials say they have made progress in cleanup.

Tom Tailford looks at the Clinton River in his backyard. He and Ingrid Horodko share a home in Clinton Township and the river was affected by an oil spill.(Photo: Sarah Rahal / The Detroit News)Buy Photo

Clinton Township – An Aug. 9 oil spill in Clinton Township was caused by a recent fire at a nearby business, the Michigan Department of Environmental Quality determined after a weeklong investigation.

Clinton Township homeowners noticed a funny smell and an unusual sheen on the Teske Drain on Aug. 9 and reported it to emergency responders. Environmental Protection Agency employees spent much of Thursday at the site near Maybury Street, directing the cleanup.

The source of the oil is believed to be from Complete Prototype Services, a Fraser company working with fixtures, metals and plastics that reported a fire on Aug. 4.

During the fire, the water from the indoor sprinkler system filled a machine pit inside the building, which overflowed and made its way outdoors, where it entered a storm sewer catch basin, Steffler said.

"The water carried with it oil from the machine pit, which then made its way through the storm sewer system and out into the Teske Drain," Steffler said.

A representative from Complete Prototype Services told The Detroit News the company was unable to comment on what caused the fire.

Macomb County Public Works Commissioner Candice Miller said none of the 6,000 gallons of oil flowed into the Clinton River or the lake, but was contained in the drain.

"We have a zero tolerance for contaminants in our drains ... and we are very appreciative of the citizens alerting us," Miller said. "The company is a great corporate citizen and cares deeply about our waterways. The fire was not their fault."

Miller said a local company vacuumed the area to remove the oil for nearly a week.  As of Wednesday, Miller said, "I think we've got it all. We're in good shape."

"Macomb County has been overseeing the cleanup activities but it was reported to me (Wednesday) that the bulk of the cleanup appears to be complete," Steffler said.

The monitoring booms will continue to capture any remaining oil in the enclosed portion of the drain.

Tom Tailford and Ingrid Horodko, who live on the Clinton River, notified emergency officials Wednesday night after they smelled oil. Tailford collected a sample and found it was nearly clear. 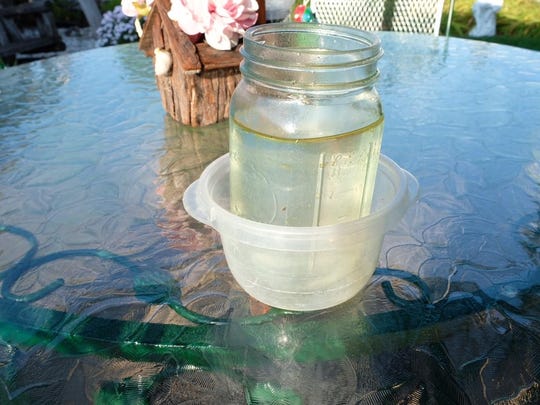 A water sample taken by Clinton Township resident Tom Tailford from the river in his backyard. The oil sheen had traveled down the Teske Drain approximately 1,000 feet north of 15 Mile Road. (Photo: Sarah Rahal / The Detroit News)

"The crew I talked to said it was a significant amount of oil they pumped," Tailford said on Friday. "I also found out that the Coast Guard also had shown up here to evaluate the risk of the oil entering Lake St. Clair."

Residents along the Teske Drain were advised to refrain from pumping surface water for lawn irrigation or other uses while cleanup had been ongoing.