'Doing what kids do': 3 boys thank firemen after rescue from gun safe

It was a hot 12 minutes, Sunday afternoon, as Sterling Heights firefighters sawed and pried, working to rescue three little boys, all 3 or 4 years of age, from the human-size gun safe they managed to lock themselves into.

The 911 call on the incident came in about 5:30 p.m. Sunday, on the 13000 block of Maidstone Court, which is south of Metro Parkway and west of Schoenherr. 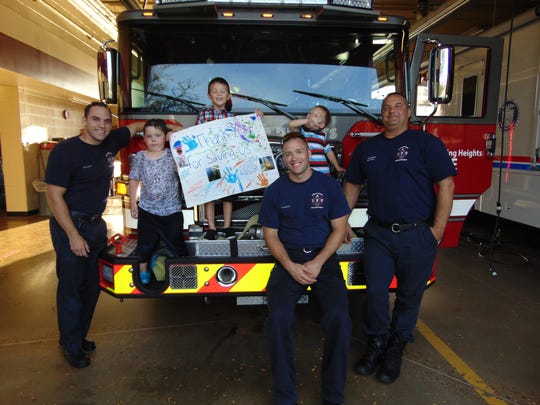 The safe had just been delivered to the home. It was such a new arrival that the instructions for its use, as well as its combination, were still inside by the time all three boys were locked in.

One of the three boys lived at the home, and the safe belongs to his father. The other two are his friends. They entered the safe at the convincing of a girl, 5. And then the safe shut, somehow.

"They were just playing, doing what kids do, and it happened," said Fire Chief Chris Martin. 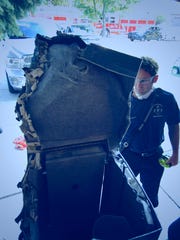 Firefighters had to cut the top off the gun safe to rescue the boys. (Photo: Sterling Heights Fire Department)

Using the "Jaws of Life" and a reciprocating saw, two fire crews were able to cut the top off of the safe and pull the children out, unharmed. After the boys were rescued, firefighters asked the parents to shower the boys off and give them fluids, which helped them beat the heat. None had to be transported or given additional medical attention.

On Monday, Martin said, the boys showed their gratitude, stopping by a firehouse with a homemade poster that said: "Thank you for saving us."

It was a gesture firefighters appreciated, Martin said.

"It is pretty cool," Martin said.