Fixed in Fraser: Sewer pipeline back in action

Fixed in Fraser: Sewer pipeline back in action

Fraser — Repairs to the pipeline that collapsed last Christmas Eve and caused a massive sinkhole on 15 Mile have been finished, officials said Tuesday.

Miller made the remarks at a 10 a.m. news conference near the construction site where crews have been working to repair the Macomb Interceptor Drain. She marked the occasion by turning off the pumps that had moved sewage around the ruptured portions of the pipeline and removing a bulkhead to allow waste to flow through it again.

“We still have a bit to do,” she said. “We have to fill in a shaft. We have to refill the sinkhole. And of course, we have to reconstruct 15 Mile Road.”

She said Tuesday the project was done ahead of schedule and under budget. Miller said it was initially thought that the project could take three years to finish. The price tag for the work was estimated to be as high as $100 million. The cost is more likely to be in the $70 million-range, she said.

“Ahead of schedule and below budget, I’m going to tell you, it doesn’t get any better in government work,” Miller said.

Money for the project came from a $70 million bond sale and a $5 million grant from the state. Miller said it will cost residents of the communities served by the sewer an extra $25 a year for the next 25 years.

She also said she expects 15 Mile to be repaved and reopened before Christmas.

“What we have here now is a normal construction site,” Miller said. “There’s no longer any type of a crisis.”

Tina Perlaska, co-owner of Tina’s Baking Co., said that was good news. Her business opened up about three months ago in the strip mall that’s on the southeast corner of 15 Mile and Utica roads, she said. She owns the bakery with her husband, Viktor Perlaska, as well as Vik’s diner a few doors down.

“It would be wonderful,” she said. “It’ll be a dream come true.”

She said she’ll be glad when the road is completely fixed and open so more foot traffic can find its way into her shop, which specializes in cakes, cupcakes, pastries and other sweets.

“I’m very happy about that,” Perlaska said. “I can only see things getting better.”

The Macomb Interceptor Drain, which is owned by Macomb County, is an 11-foot-diameter pipe that runs 60-feet underneath 15 Mile on the border between Clinton Township and Fraser. It transports sewage from 11 communities and some 40,000 businesses into a network that leads to a wastewater treatment plant in Detroit operated by the Great Lakes Water Authority.

The collapse also forced the evacuation of 22 homes and three of those houses had to be condemned. Two of the houses were demolished. Miller said Tuesday the county purchased the third home and plans to re-sell it after all of the work on 15 Mile is complete. 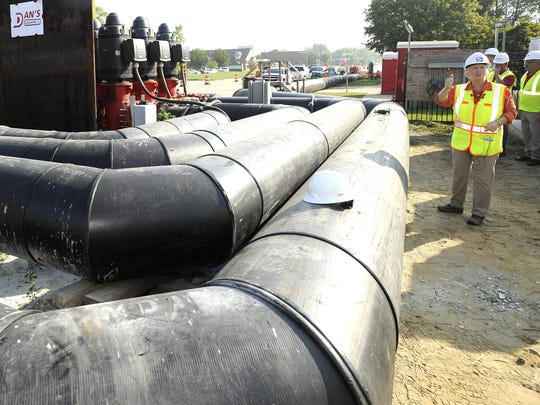 Fixing the sewer required crews to dig a 65-foot deep shaft to enable workers to remove and replace the collapsed section of the sewer.

Miller also commissioned an inspection of the rest of the sewer line, which found that 3,700 feet of the pipeline was in imminent danger of collapsing. To stave off catastrophe, the section of pipe was reinforced with a new pipe which was cemented in place.

The project wasn’t without challenges. The city of Sterling Heights has sued the county over its share of the repair bill. The case is still pending in court.

And last month, about 1.5 million gallons of sewage backed up into a trench at the construction site.

The trench was pumped out and the sewage was routed to another sewer line. At the time, Miller called the event a slight setback, posed no threat to workers or citizens and said repairs on the pipeline were still on track.

She also promised the sewer would not collapse again. There have been three in the same area in the past, one in the 1970s, one in 2004, and another in 2011.

“This is probably going to be the strongest piece of infrastructure in the entire state of Michigan,” Miller said. “We’re never going to have another sinkhole on 15 Mile Road.”