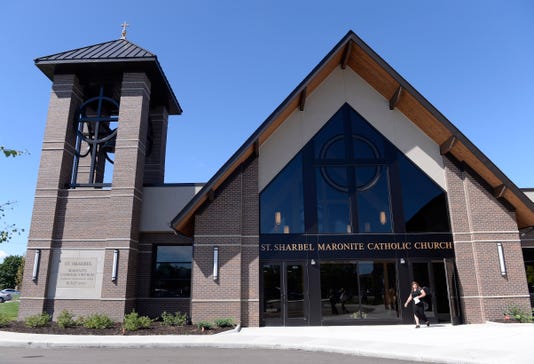 Clinton Township — A bishop from Los Angeles delivered a sermon Sunday for the dedication of Michigan's largest Maronite Catholic Church: Be inspired, be welcoming.

"I want you to extend yourselves to each other to welcome them and readily receive them without judgment," said A. Elias Zaidan during the Dedication Mass for St. Sharbel Maronite Catholic Church. "Let's be inspired by St. Sharbel and show our faith on a daily basis. This way, we're not only consecrating the building, but we're consecrating ourselves."

The bishop of Eparchy of Our Lady of Lebanon in L.A. added: "You make the church a lot more beautiful by your presence."

Chorbishop Alfred Badawi, pastor of St. Sharbel, welcomed parishioners and guests to the Mass for a 2 1/2-hour service that included singing and communion. But the special day also included blessing the walls with holy oil and tying a bright red ribbon around the entire length of the sanctuary..

The church was located in Warren but moved to Clinton Township as part of a major expansion and construction project.

"I am honored to welcome everyone to our new home," said Badawi. "It is a beautiful place for prayer, worship and social activities." 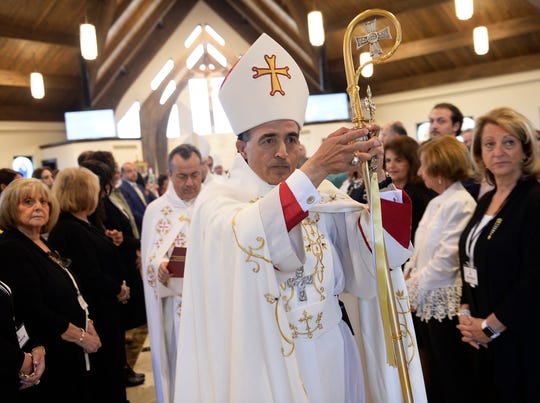 A. Elias Zaidan, bBishop of the Eparchy of Our Lady of Lebanon of Los Angeles, leads a dedication of the new church during the service on Sunday, Sept. 16, 2018. (Photo: Clarence Tabb Jr., The Detroit News)

The 29,000-square-foot church, named after a saint known for his miracles around the world, includes architectural influences from among the world's most historic churches in Lebanon, where St. Sharbel was born and beatified Dec. 5, 1965. He was canonized Oct. 9, 1977.

The church has served a diverse population in southeast Michigan for more than three decades, and includes a large population who immigrated to Detroit from Lebanon and other Middle Eastern countries. Lebanese Maronite Christians are adherents of the Maronite Church in Lebanon, which is the largest Christian denomination in the country.

Andrew Hatty, 40,  said he is the fourth generation in his family to attend the church.

"I've been attended St. Sharbel all my life," he said. "This church is important to me because my great-grandfather helped founded the original church in Detroit on Congress."

Hatty, who said he handles social media for the church, described it as "the cornerstone" to the Lebanese Maronites who migrated from Lebanon.

"Many came to Detroit to work in the automotive industry," he said. "This is our gathering place. It is very family-oriented with many activities for both children and adults."

Other issues, including victims of sexual abuse by priests, as well as those who are facing Hurricane Florence, were brought up by Zaidan.

"We pray for the victims who have been sexually abused and those victims of Hurricane Florence," Zaidan said.

Donna Deeby smiled as she described how she liked the new church.

"I just love it," she said. "The people here are very close and hospitable. It's like a family, and we love our pastor."