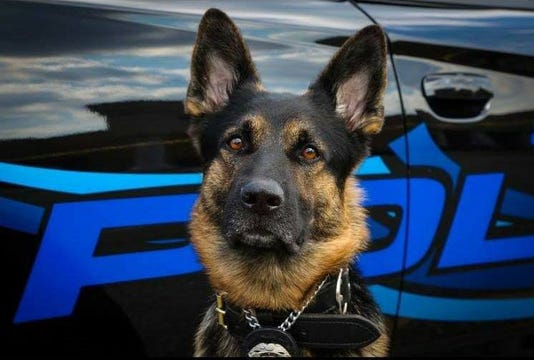 Police responded to reports of a man outside the banquet hall on Harper Avenue just before 6:30 p.m. About 70 people were inside the hall at the time, police said.

The man with the gun allegedly ignored multiple demands from officers and fled the scene. Axe, a K-9, was used to track the suspect, who shot the dog with a handgun, police said. Officers returned fire, striking the man. Police haven't released the man's name.

The shooter and the K-9 officer died later Sunday, police said. State Rep. Kevin Hertel was among those expressing condolences for Axe.

Hertel posted on Facebook: "Our prayers are with the St Clair Shores Police Department and K-9 Axe who was shot during an incident this evening. We have confirmed Axe has been pronounced dead. We thank him for his loyal service protecting our community."

"As always, we are eternally grateful for the men, women & canines that serve to protect our communities. Axe paid the ultimate price tonight," he wrote, followed by an image of a broken heart.

Calls to Lakeland Manor were not returned.

The shooting reverberated across the city and beyond Sunday.

"K9 Axe with the St Clair Shores Police Department in Michigan has been shot and has passed away. Our thoughts and prayers are with his partner, family and fellow officers," said K9s of Valor, an Ohio nonprofit that donates life-saving equipment to police departments.

The Officer Collin Rose Memorial Foundation said Sunday night that it would donate a protective vest and first-aid bag in memory of Axe. "His two year tour of duty ended tonight," the post said. "His life mattered. Our thoughts are with the agency and his partner."

A Dec. 2016 article from the Patch news site said that Axe joined the St. Clair Shores force at the age of 2.

Axe was named after Navy SEAL Petty Officer 2nd Class Matthew Axelson, a 29-year-old resident of Cupertino, California, who was killed in Afghanistan in 2005, according to the Patch article.