Feds indict six doctors who cheated Medicare and Medicaid out of almost $500 million and fueled nation's opioid crisis, according to court records. 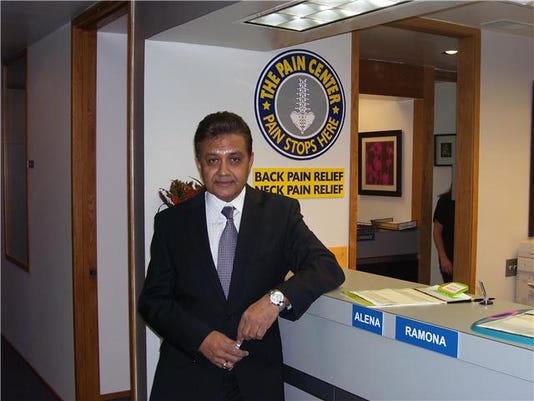 Detroit — Six doctors were charged in an unsealed indictment Thursday with cheating Medicare and Medicaid out of almost $500 million and fueling the nation's opioid epidemic by illegally prescribing more than 13 million doses of prescription pain medication.

The scheme was focused within three pain clinics in Macomb County. They are The Pain Center USA in Warren and Eastpointe, and Interventional Pain Center in Warren.

The three clinics were owned and operated by Dr. Rajendra Bothra, 77, of Bloomfield Hills, a surgeon, humanitarian and politician. In 1999, Bothra was presented with the highest civilian honor bestowed in India, known as the Padmashri.

Bothra was cited for humanitarian efforts in India, which included educating people about AIDS, the dangers of tobacco and alcohol, and fundraising efforts for medical equipment.

Bothra's clinics "sought to bill insurance companies for the maximum number of services and procedures possible with no regard to the patients’ needs," prosecutors alleged.

“The damage that opioid distribution has done to our community and to the United States as a whole has been devastating,” U.S. Attorney Matthew Schneider said in a statement Thursday. “Healthcare professionals who prey on patients who are addicted to opioids in order to line their pockets is particularly egregious."

The other doctors charged are:

The doctors all worked in various capacities at Bothra's clinics and lured patients there by prescribing opioids, the indictment alleges.

After arriving at the clinics, patients received the pain medications and were forced to undergo treatments that included injections, according to the government.

Bothra and Lewis were arranged in federal court Thursday.

The disheveled doctors were arrested early Thursday and brought to court in handcuffs and ankle chains.

Bothra, his hair rumpled, sat next to Lewis on a courtroom bench while waiting to be arraigned. Lewis, dressed in a green T-shirt and black jeans with the pockets turned inside out, ignored Bothra, who sat silently.

Coincidentally, the doctors, charged in an opioid case, sat next to two men who were charged Thursday with distributing a lethal dose of fentanyl.

Bothra is being held without bond pending a detention hearing Friday in federal court. His lawyer declined comment.

Lewis was released on $10,000 unsecured bond, barred from prescribing drugs and billing Medicaid or Medicare.

Russo and Edu also were released on $10,000 unsecured bond.

The scheme started in January 2013 and continued until last month and involved charging Medicare, Medicaid and Blue Cross/Blue Shield of Michigan for medically unnecessary services and equipment, the indictment alleges.

The conspiracy cost Medicare more than $182.5 million, $272.6 million to Medicaid and $9.2 million to Blue Cross/Blue Shield, according to the indictment.

The doctors also were responsible for prescribing 13,217,987 doses of opioids, including OxyContin, Vicodin, hydrocodone and Percocet, the government alleges.

“Physicians who engage in the illegal and negligent prescribing of controlled substances in order to unjustly enrich themselves of taxpayer dollars will be held accountable” said Lamont Pugh III, special agent in charge, U.S. Department of Health & Human Services, Office of Inspector General. 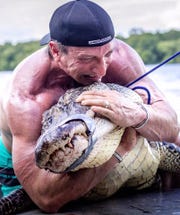 Dr. Frank Patino, 63, of Woodhaven is awaiting trial in one of the largest health care fraud cases in U.S. history. (Photo: Facebook)

The allegations outlined in the complaint are “terrifying,” said Monique Stanton, president and CEO of CARE of Southeastern Michigan, a Macomb County-based group that provides substance abuse treatment.

“It is imperative that those medical officials who abuse their powers for financial reasons are held accountable — we are in a life-and-death situation in this epidemic,” Stanton wrote in an email Thursday. “Physicians see people at their most (vulnerable), especially those suffering from severe pain, so this is a major breach of trust to see them take advantage patients in this way.”

The alleged conspiracy is the third totaling more than $100 million in recent years in Metro Detroit.

Dr. Frank Patino of Woodhaven was charged in June and accused of orchestrating a $112 million health-care fraud.

Prosecutors, court records and social-media posts portray Patino as a conniving crook with lies as big as his biceps, an alligator-wrestling, steroid-buying, frequently shirtless fraudster who spent ill-gotten gains on mixed martial arts fighters and a vanity diet program.

Patino is jailed while awaiting trial.

The Patino case is linked to an investigation involving a $200 million scheme and businessman Mashiyat Rashid of West Bloomfield Township. Prosecutors say Rashid spent his share of the scheme on a $7 million Franklin mansion, courtside NBA tickets, a Lamborghini, Hermes clothes and rare watches.

Federal prosecutors Monday flashed the cash, supercars and super bank accounts of Mashiyat Rashid, 37, of West Bloomfield Township, the accused architect of a $132 million health-care fraud scheme in a bid to keep him behind bars. (Photo: U.S. Attorney's Office)

During the Rashid investigation, federal agents have seized more than $21 million worth of cash and real estate and want Rashid's mansion forfeited to the government.

Rashid struck a plea deal with prosecutors in October