In place of a Roseville 'sleep out' fundraiser meant to combat and raise awareness of homelessness, shelter resources will be offered 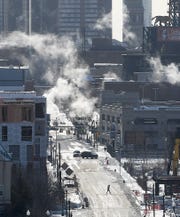 The region experienced record cold weather Jan. 30, 2019. The cold prompted cancellations and closures throughout the region including a "sleep out" to raise awareness of homelessness in Roseville. (Photo: Daniel Mears, The Detroit News)

A planned "sleep out" event Friday in Roseville, a fundraiser meant to combat and raise awareness of homelessness in Southeast Michigan, was cancelled due to "extreme cold," organizers said. In its place, shelter resources will be offered to bring people in from that cold.

Roseville Police Department announced the change in plans Thursday morning, in the midst of arctic cold that was linked to two local deaths Wednesday. The sleep out had been set for Friday 7 p.m. to Saturday at 7 a.m. outside of police headquarters.

A group called Macomb Feeding The Need puts on the Sleep Out for the Homeless. The event was meant to "spotlight the difficulties the homeless endure this time of year," but instead came during a polar vortex that has led social service organizations to drive the streets of Metro Detroit, looking for people to bring in from the cold.

Roseville Police Chief Ryan Monroe was set to be one of the participants, per the statement.

Instead, Macomb Feeding the Need will open a temporary shelter, at 27151 Gratiot, the Roseville Masonic Center from 6 a.m. Thursday to 8 a.m. Friday.