The Macomb County Animal Control is currently looking to find space for 53 dogs rescued from a hoarding situation. The Detroit News

Clinton Township — The Macomb County Animal Control is at double capacity Thursday after taking in 53 rescued dogs from a hoarding situation in Sterling Heights, officials say.

The Sterling Heights Police Department received a tip from a resident Wednesday afternoon, saying her neighbor was loading many dogs into a U-Haul. Police responded to the scene and called Animal Control Chief Jeff Randazzo.

“The dogs are anemic, suffer from malnutrition because of the environment they were living in,” Randazzo said. “They were frantic, had a lot of anxiety and were stressed out. It was important for us to weigh every dog, scan them and take pictures for an inventory and then get them back to health."

Randazzo says the homeowner had been evicted and was loading up the dogs in the moving van to take them to somewhere in Warren.

“As soon as I pulled up, then I realized the dogs were loose and we weren’t talking like small-breed dogs,” he said. “The owner took a 10-foot table, flipped it up to keep the dogs from escaping.” 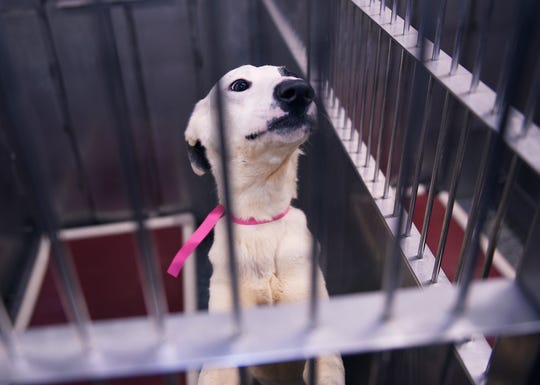 This is one of the 53 dogs Macomb County Animal Control removed from a home in Sterling Heights. (Photo: Clarence Tabb Jr. / The Detroit News)

The male owner told authorities he rescued the mixed-breed dogs, who ranged from puppies to 8 years old, from the streets of Detroit, said Randazzo. The dogs were covered in feces, with long yellow nails and most were so skinny, their rib cages could be seen from afar.

"He felt like his heart was in the right place but a lot of times, things get out of hand,” Randazzo said. “He hoarded items and dogs, and it’s part of mental illness. At no point did a red flag come up (to him) until the dogs were taken."

Mark Hackel, Macomb County Executive, said the feral dogs were so desperate to escape the truck, one had to be euthanized due to injuries it sustained in the struggle.

“These aren’t mean dogs, but it’s tragic to say, they wanted out of that truck so bad and it was difficult to get them out because they were covered in feces,” he said. "One of the dogs was a little bit more aggressive, was injured and had to be put to sleep.” 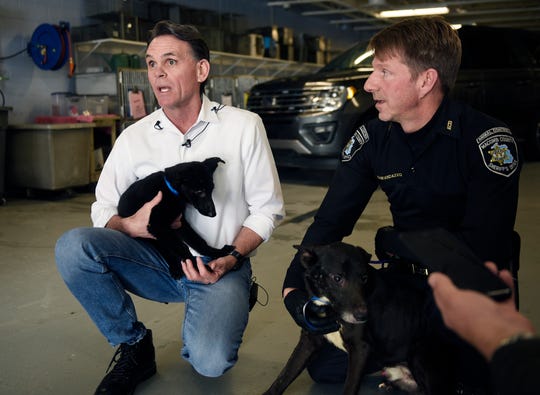 Housing the dogs has become an issue. Animal control has 111 dogs in its care and Randazzo is working with nearby shelters to take in some of the rescued dogs. Macomb Community College vet tech students volunteered Thursday to wash the dogs and Baker College students offered to give vaccines and draw blood.

“It’s pretty sad. They’re in pretty challenging shape starving for food, obviously, for attention,” Hackel said. “As sad as it is I’m thinking their lives have just begun and they're so easily adoptable, I’m having trouble letting go of some myself.”

Police said no further details into the investigation were going to be released at this time.

The dogs are not available for adoption, but Macomb County Animal Control is waiving all fees for their 50 adoptable dogs on Thursday and Friday until 5 p.m.as part of a Valentine's Day offer. And to help make space in the shelter. 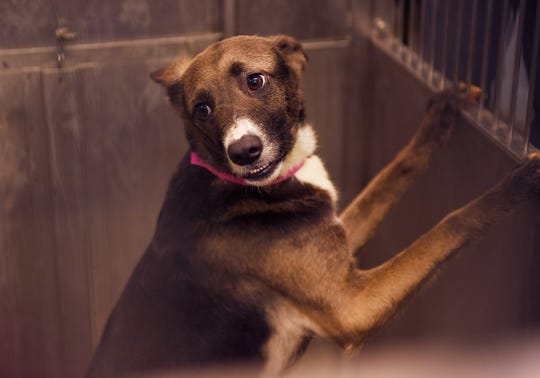 This is one of the 53 dogs removed from a home in Sterling Heights. (Photo: Clarence Tabb Jr. / The Detroit News)

The agency is asking for donations in many forms. Drop-offs can be done between 10 a.m.-5:30 p.m. on weekdays at the office an 21417 Dunham Rd, Clinton Township.

They also have an Amazon wish list of necessities.