Editor's note: Warning: the before photo of the dog is disturbing. 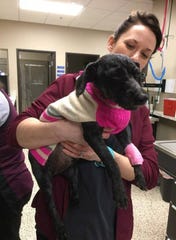 Six-year-old poodle mix after being cleaned up. (Photo: Facebook)

Before and after photos of a dog rescued with 42 others from a garage in a Roseville cemetery shows the cruel conditions they were kept in.

The Woodhaven Animal Hospital posted photos on Facebook of a dog that was in imminent need of care after being rescued from a garage at the Aaron Moishe Cemetery at Little Mack and Masonic.

The animal hospital said it was sent a photo of the 6-year-old poodle mix late Sunday night and Dr. Lucretia Hodge Greear  ordered rescuers to bring him in. The dog was missing a foot and feces covered his entire body, officials said.

"Photos could not even do justice for how bad this little guy looked and smelled," officials wrote on Facebook. "He was covered in feces and urine from his ears, to his eyes, to his entire body."

The team members said he was in such a bad condition, they had to sedate him to begin removing his hair. 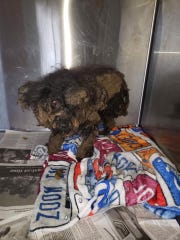 He was covered in feces and urine from his ears, to his eyes, to his entire body, officials said. (Photo: Facebook)

"He was dehydrated, loaded with hookworms, and just plain sick from being so filthy," the hospital wrote. "He is missing a foot and we do not know how that occurred."

Roseville police seized 33 dogs Saturday from the garage. Officials said Tuesday the total was raised after they removed another 10 dogs from the home next to the garage.

A 51-year-old woman who was responsible for the animals resides in the home adjacent to the garage. She told police she was running a rescue in Oakland County. Officials said it's unknown if it was a licensed operation.

An animal control officer from Macomb County Animal Control determined the dogs needed to be removed for health and sanitary reasons.

The dog has had a bath, dental work and fluids, and is resting well, the hospital said.

He is ready for his forever home and is up for adoption through Furever Tails Animal Rescue in Oakland Charter Township.