Sterling Heights, Warren and Harrison Township allege defendants deliberately tried to maximize profits at the expense of individuals and communities. 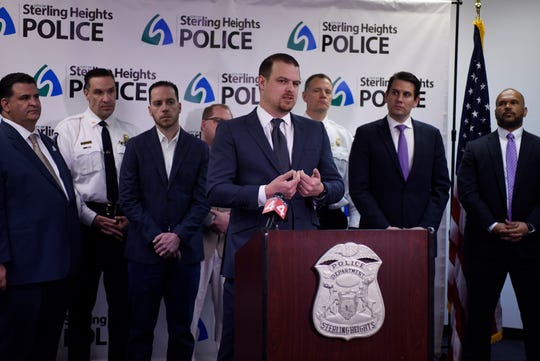 The cities of Sterling Heights and Warren and Harrison Township said they are seeking damages for defendants’ allegedly deliberate efforts to maximize profits at the expense of individuals' lives, families and communities.

All three complaints were filed Wednesday in Macomb County Circuit Court and name the Pain Center USA — currently under federal indictment for allegedly producing 13 million doses of opioids — and Interventional Pain Center, both in Warren; drug manufacturers including Purdue Pharma, Allergan and Teva, and distributors including AmerisourceBergen, Cardinal Health and McKesson.

All complaints allege the opioid manufacturers used captive and aggressive marketing schemes to promote the use of their drugs; that distributors failed to implement “basic controls" to stem widespread use; and doctors wrote “thousands upon thousands of unnecessary opioid prescriptions.”

“Powerful drug companies and their associates must be held responsible for the criminal negligence and fraudulent misrepresentations that have devastated our communities and irrevocably damaged the lives of our citizens,” said Sterling Heights Police Chief Dale Dwojakowski. “The over-prescription and abuse of opioid medication has drained our health care systems while causing widespread economic adversity and loss of health and dignity.”

Also appearing was Sterling Heights Mayor Michael Taylor, who said the lawsuits are part of a “civic duty” to hold drug makers accountable for what is regarded by some as the worst drug crisis in American history.

In a statement, the Healthcare Distribution Alliance, an industry group that represents pharmaceutical distributors, responded Thursday to the lawsuits.

"The idea that distributors are responsible for the number of opioid prescriptions written defies common sense and lacks understanding of how the pharmaceutical supply chain actually works and is regulated," said alliance spokesman John Parker. "Those bringing lawsuits would be better served addressing the root causes, rather than trying to redirect blame through litigation.”

Opioids include both illegal drugs, like heroin, and prescription pain medicine like oxycodone, hydrocodone, morphine, methadone and codeine. Michigan statistics show from 1999 to 2017, the total number of overdose deaths involving any type of opioid increased more than 19 times, from 99 to 1,941.

“We were recently swearing in some new employees and had to delay because they were sent out on an emergency run (for a drug overdose),” said Harrison Township Supervisor Ken Verkest. “It was the second time the same people were sent out on that kind of a run in a 24-hour shift … You or I may have needed those people to come and help us.”

David Clayton, an outreach coordinator for Families Against Narcotics, said he has traveled across the state and things keep getting worse.

“These overdoses are not throw-away people,” said Clayton, himself a recovering heroin addict.

He noted that according to federal authorities, the Pain Center in Warren was seeing 60 to 70 patients a day, with doctors who prescribed opioid drugs after less than a two-minute consultation.

The two Warren clinics were shuttered in December 2018 following an FBI raid of the premises on allegations of health care fraud.

David Clayton, Outreach Coordinator for Families against Narcotics, talks about his experiences as a former user and how he is now trying to help addicts. (Photo: Clarence Tabb Jr., The Detroit News)

Warren city attorney Rob Huth, who is listed as a lead counsel in the Macomb County lawsuits, said Warren and other communities filed in the county court because they believe it is important to have people there — rather than in a federal court — decide the impact the drugs are having on society.

“They see it first hand every day,” said Huth, who said Macomb County is one of the hardest-hit counties in Michigan for drug overdoses.

“In Macomb County, 85 prescriptions were being written for every 100 people … that’s ridiculous. That’s not right.”

Huth predicted the drug companies will try to get the cases moved out of Macomb County but attorneys plan to fight to keep them in Macomb.

The lawsuits all seek jury trials and unspecified damages, to help pay related costs to the victims and their families and to the communities.