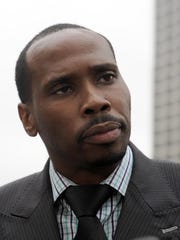 Mount Clemens — A Highland Park man known for suing elected officials and government agencies to obtain public records is at it again — this time in Macomb County.

Among the records Davis wants: an inventory of items Michigan State Police seized from his Macomb Township home Tuesday and from his county office last month as part of a probe of how he used $1.8 million in asset forfeiture funds.

Detectives removed security cameras and other electronic equipment from the outside of Smith’s house. A month earlier, state police detectives seized documents and records from Smith’s office in Mt. Clemens.

“I am interested in this because here is a member of law enforcement who is withholding records from the public,” said Davis. “I’m a believer in public transparency in government, which for too long has operated in secret. This is not only about turning over public records but complying with the law.

“Here you have a prosecutor I believe has deliberately kept information from the public eye because it is embarrassing and possibly incriminating to him. I find that very troubling.”

Davis also wants copies of any subpoenas served on Smith by the FBI or the U.S. Attorney's Office.

The FBI also is conducting an investigation into Smith's spending of the asset forfeiture funds, The Detroit News has learned.

Davis said he filed a request with the corporation counsel's office on April 17 for documents under the state Freedom of Information Act and was advised by the office's FOIA coordinator in an April 18 email his request had been received. However, Davis said he has yet to receive the requested documents or “even a notice denying my request.”

It is not unusual for public bodies to balk at disclosing information that might be part of an ongoing criminal investigation. Smith has repeatedly said he has nothing to hide and is cooperating with the probe.

“We have not yet been served with the lawsuit," assistant county prosecutor Joshua R. Van Laan said Thursday on behalf of Smith. "We cannot comment on something we have not seen.”

Davis contends there are no exemptions under the law to deny him the documents he seeks and maintains Smith has a “clear legal duty to immediately disclose” them.

If a judge determines the FOIA law has been violated in any way, the public agency involved can be fined $1,000 and ordered to pay all attorney fees, court costs and additional fees determined appropriate by the court.

Davis is not alone in seeking the documents from Smith's office. Requests also have been filed by The Detroit News and the Macomb County corporation counsel, who represents the county in legal matters.

A former member of the Highland Park school board, Davis was sentenced to 18 months in federal prison in 2014 after pleading guilty to converting money from the school district for his own use and filing a false tax return.